Man United dominate this XI. My word they produced some phenomenal players... 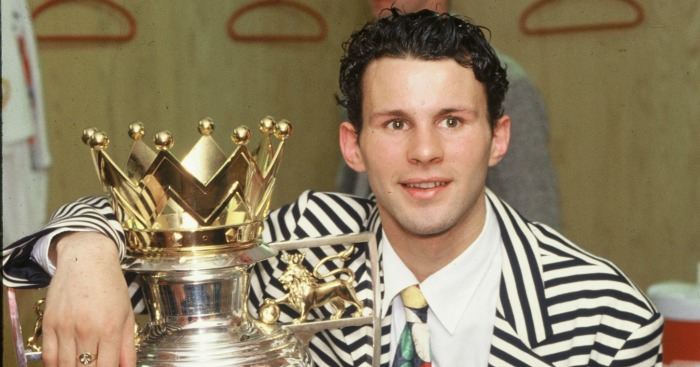 Manchester United’s young forwards may not have got the job done in the Europa League but this week marks 25 years since Alan Hansen’s infamous comments about the Red Devils’ youthful side of the mid-nineties. Here’s a team made up from those who proved you can win something with kids; all of them were 21 or under when they lifted the Premier League title…

Goalkeeper: Alex Manninger
Unsurprisingly there aren’t any stand-out options on the goalkeeper front, although David de Gea would have won the title as a 21-year-old in 2012 had it not been for an AGUEROOOOOO moment. Austrian ‘keeper Alex Manninger spent time as a back-up to David Seaman at Arsenal in the late nineties and early noughties, stepping in for the Yorkshire-born number one when he was injured during the Gunners’ title-winning 1997/98 season and picking up a medal at 20 years old as a result. If you fancy a goalkeeper challenge, try naming another former Arsenal bench warmer who won the title when he was 21.

Right-back: Trent Alexander-Arnold
Gary Neville qualifies for the side having lifted the Premier League title as a 21-year-old in 1996 but so there’s not an entire Manchester United based outfield, Trent Alexander-Arnold starts. The current Liverpool star also sees off competition from a former Anfield right-back, with a 20-year old Glen Johnson picking up a medal with Chelsea two years after he was relegated with West Ham.

Centre-back: Gerard Pique
Before reaching his peak at Barcelona, a 21-year-old Pique twiddled his thumbs on the bench at Manchester United but played enough in the 2007/08 season to pick up a medal. Wes Brown, Pique’s former team-mate at Old Trafford, won the title as a 19 and a 21-year-old, only missing out on a hat-trick of titles as a young player because of a long-term injury that put him out of the entire 1999/2000 season.

Centre-back: Jonny Evans
Current Leicester City centre-back Jonny Evans is another player who won the Premier League as a youngster at Manchester United. The Northern Irishman played regularly in the club’s successful 2008/09 season, when he was just 21. Two defenders currently on United’s books also qualify for this side, with the seemingly unwanted duo of Chris Smalling and Phil Jones both lifting the Premier League trophy early on their careers. Three-time winner Robert Huth, Matija Nastasic, Ian Pearce, Stefan Savic and Kurt Zouma are other options.

Left-back: Ashley Cole
Before his book and his bank balance made him became a figure of hate at Arsenal, Ashley Cole was a hero at Highbury in the 2001/02 season, helping the Gunners to a league and cup double when he was just 21 years old. Other options at left-back include Gael Clichy and Phil Neville, who both won the Premier League whilst they were still teenagers.

Right wing: Arjen Robben
Now back home at Groningen, where he started his career, Arjen Robben originally left the Netherlands in 2004, signing for newly-minted Chelsea. The winger picked up a Premier League medal in his first season, playing a starring role in Jose Mourinho’s halcyon days at Stamford Bridge whilst he was just 21. Manchester City’s Phil Foden is another option on the wing, having bagged two titles as a teenager.

The greatest Chelsea transfer window ever.

Central midfield: David Beckham
David Beckham was a young Englishman abroad in the noughties but he was a mere whippersnapper when he picked up his first Premier League title with Manchester United in the 1995/96 campaign. However, the London-born icon will have to settle for a spot in central midfield in this side, in order to accommodate Robben on the right. Another member of the Class of ’92 takes a seat on the bench, with Nicky Butt winning the title as a 21-year-old.

Central midfield: Paul Scholes
Paul Scholes completes a Manchester United based central midfield, having picked up the first of his 11 Premier League titles as a 21-year-old in 1996. In the same season as Scholes was picking up his eighth title, 20-year-old Brazilian midfielder Anderson won the first of FOUR Premier League titles. Chelsea youngster Ruben Loftus-Cheek is also eligible, having picked up a medal with the Blues in the 2016/17 season.

Left wing: Ryan Giggs
Twenty years before he secured an incredible 13th Premier League in 2013, Welsh Wonder Ryan Giggs lifted the trophy for the first time at the age of 19. Leicester City’s Demarai Grey won the title with the Foxes as a 19-year-old in 2016 and former Arsenal duo Luis Boa Morte and Jose Antonio Reyes also qualify for the side, having helped the Gunners to Premier League glory as youngsters in 1998 and 2004 respectively.

Striker: Wayne Rooney
Long before the beard of his veteran years came the brilliance of a teenage Rooney in the early noughties. The Merseyside-born star made headlines at boyhood club Everton, earning him a big-move to Manchester United in 2004. Rooney and Ronaldo (who misses out on eligibility for this side by a few months) were on fine form in the 2006/07 season, helping the Red Devils to their first Premier League title win since 2003.

Striker: Nicolas Anelka
Anelka had barely turned 19 when he won the Premier League title in the 1997/98 season, at the end of an incredible campaign that saw him score in the FA Cup final to hand Arsene Wenger’s team a league and cup double. Current Manchester City forward Gabriel Jesus is eligible for the side after his club’s 2017/18 triumph, following in the footsteps of former madcap Citizen Mario Balotelli, who lifted the title as a 21-year-old in 2012.