This is a great team of former Premier League players who have won both the big ones. 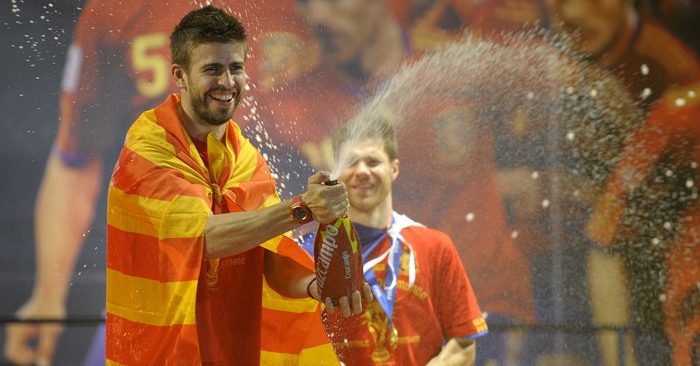 Goalkeeper: Fabien Barthez
Barthez’s eccentric antics may not have endeared him to Alex Ferguson at Manchester United but the French ‘keeper already had a mightily impressive medal collection by the time he arrived at Old Trafford at the turn of the century. As well as winning the World Cup with Les Bleus on home soil in 1998, Barthez lifted the Champions League in 1993, with Marseille achieving what PSG could not. If you fancy a goalkeeper challenge, try naming another former Manchester United ‘keeper who has won the Champions League and the World Cup.

The European Cup has only returned to French soil once before – it required a Marseille squad starring Barthez, Desailly, Völler, Abedi Pele and Deschamps to do so.pic.twitter.com/75j1clcu5d

Right-back: Juliano Belletti
A member of Brazil’s victorious squad at the 2002 World Cup in South Korea and Japan, Juliano Belletti added the Champions League title to his medal collection in 2006. Arsenal fans will remember him scoring a late winning goal for Barcelona in the final, with the Spanish side coming from behind to beat the Gunners. Belletti almost won a second Champions League title with Chelsea two years later, converting a penalty in the Blues’ shoot-out defeat to Manchester United.

Centre-back: Gerard Pique
Gerard Pique was watching from the stands that night in Moscow, having missed out on selection for the Manchester United squad. A year later, the Spaniard lifted the trophy with Barcelona, helping his new side defeat his former employers in the final. A year after that, Pique got his hands on the World Cup, with club team-mate Andres Iniesta’s injury-time goal putting Spain’s name on the trophy for the first time ever at the expense of the Netherlands.

Centre-back: Marcel Desailly
Basile Boli’s header in the first ever final of the Champions League era gave Marcel Desailly a winning feeling, as his Marseille side defeated AC Milan by a solitary goal. Next year’s final saw Desailly on the scoresheet, with the Frenchman finding the net for the Rossoneri in their 4-0 demolition of Johan Cruyff’s Barcelona. He went on to join Chelsea in the summer of 1998, fresh from adding a World Cup winner’s medal to his collection.

Left-back: Jerome Boateng
The former Manchester City man will have to fill in at full-back in this side, having won the World Cup with Germany and two Champions League titles with Bayern Munich. Other eligible defenders include former Everton centre-back and world-class antagonist Marco Materazzi, who won the treble with Inter Milan in 2010, Alvaro Arbeloa and Leeds United legend Roque Junior, who lifted the World Cup with Brazil in 2002 and the Champions League with AC Milan in 2003.

Defensive midfield: Didier Deschamps
Captain of the World Cup-winning side in 1998, the current France boss was also the skipper for Marseille in their 1993 Champions League final victory. Deschamps won Europe’s premier tournament again three years later, as part of the last Juventus side to win the competition to date…a quarter of century on, there’s a reason they’ve pinned all their hopes on Ronaldo.

Central midfield: Bastian Schweinsteiger
A mere footnote in the history of Manchester United but a colossus for Bayern Munich and Germany, Schweinsteiger got his hands on the Champions League trophy in 2013 after Arjen Robben’s late winner saw the Bavarian side defeat Jurgen Klopp’s Borussia Dortmund. The following summer he added a World Cup winner’s medal to his collection after Die Mannschaft sunk Lionel Messi and his Argentina side in Brazil.

Central midfield: Xabi Alonso
A former team-mate of Schweinsteiger at Bayern, Alonso won the Champions League with Liverpool in 2005, famously scoring the equalising goal against AC Milan. He was also part of Real Madrid’s victorious 2013/14 European campaign, although he was suspended for Los Blancos in the final. Alonso featured in Spain’s triumphant 2010 World Cup-winning team, although he was subbed in the final for Cesc Fabregas, a man who never managed to lift the Champions League trophy. He is in good company.

Attacking midfield: Juan Mata
Mata may well soon be leaving the history, heritage of pedigree of Manchester United but his biggest triumphs have come in the blue of Chelsea and red of Spain. He was part of his national side’s 2010 World Cup-winning squad and went on to lift the Champions League trophy in his first season at Stamford Bridge, although he missed a penalty in the Blues’ shootout victory against Bayern Munich. Recently departed Chelsea star Pedro is also eligible for this side, along with former Middlesbrough midfielder Christian Karembeu.

Striker: Fernando Torres
A team-mate of Mata for both Chelsea’s Champions League winners and Spain’s world-beaters, Fernando Torres came on for David Villa in extra-time to help his country to victory in 2010. He was on the bench again in 2012, coming on late for Salomon Kalou in the Champions League final, although he’d already made a vital contribution to Chelsea’s cause after his sex-noise inducing goal against Barcelona in the semis.

Striker: Thierry Henry
Just 20 years old when he won the World Cup with France in 1998, Henry didn’t manage to get on the pitch as Zinedine Zidane stole the show in the final. However, he was in the starting line-up for Barcelona in their 2009 Champions League final win over Manchester United in Rome, three years after he was on the losing side with Arsenal. Former Liverpool striker Karl-Heinz Riedle is also eligible for the side, having won the World Cup with Germany in 1990 and the Champions League with Borussia Dortmund in 1997, scoring two goals against Juventus to help the club win the competition for the first time.