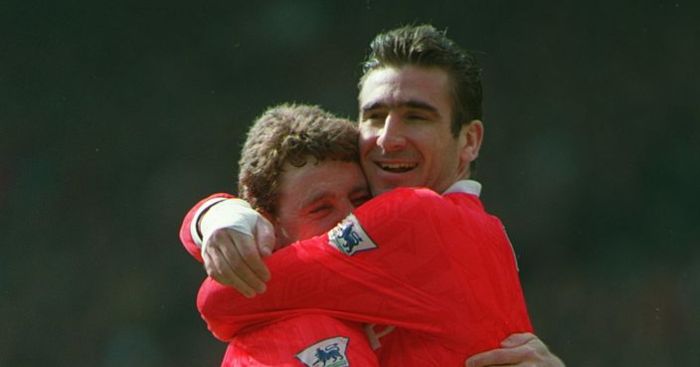 Indulge in some football nostalgia and revisit the early years of the Premier League with the 1992/1993 Story of the Season XI, sponsored by Man Utd…

Goalkeeper: Bryan Gunn
Gunn kept goal for Norwich City as they achieved a club record third-place finish in the top flight, despite ending the season with a negative goal difference. Norwich had comes 18th the campaign before but started the maiden Premier League season in incredible and highly entertaining form, topping the table for large periods. They beat Arsenal and Chelsea early on but also suffered big defeats, including a 7-1 thrashing at the hands of newly-promoted Blackburn Rovers. Norwich suffered relegation a couple of seasons later, but Gunn remained with the club until 1998.

Right wing-back: Gunnar Halle
Halle lost out to Henning Berg in the First Season Foreigner XI but gets a place here for his vital contribution to keeping Oldham Athletic in the Premier League at the expense of Crystal Palace. The Latics needed a positive result against Southampton to ensure survival on the last day of the season, while relegation rivals Palace took on mid-table Arsenal. Halle assisted two goals and scored the winner as Oldham beat Saints in a thrilling 4-3 win, overshadowing England’s woefully undercapped Matt Le Tissier, who scored a hat-trick for the defeated side. Palace went down with a whimper, losing 3-0 at Highbury.

Centre-half: Steve Bruce
Defender Steve Bruce scored twice in the last five minutes of Man Utd’s game against Sheffield Wednesday in April of 1993. The vital win from behind saw the Red Devils go top of the league and the match became the enduring image of the season, the turning point in the title race. The injury-time victory became symbolic of Alex Ferguson’s long reign at Old Trafford. Bruce was one of the finest defenders in the top flight at the time and starts in the Premier League XI B-Side.

Centre-half: Gary Pallister
Pallister became the first person to play every minute of a Premier League-winning campaign as part of Man Utd’s victorious team Aston Villa’s surprise loss to relegation-threatened Oldham handed Man Utd the title on May 2, with Nick Henry scoring the first ever Premier League title-clinching goal. Pallister scored in the 90th minute against Blackburn Rovers in a 3-1 victory for Man Utd the following day as the Red Devils came from behind (naturally) to celebrate the title win in style.

Left wing-back: Stuart Pearce
Then-Nottingham Forest captain and England international Pearce stayed with the club after they suffered relegation and became the first team to finish bottom of a Premier League table. It was a sad end to the iconic Brian Clough’s managerial career and marked the end of a golden era that included a First Division title and two European Cup wins. The 1992/93 season had started well, as they beat Liverpool 1-0 thanks to a goal from Teddy Sheringham, but he was sold along with Des Walker and the side didn’t win another game until October. Sheringham went on to be the Premier League’s top scorer with 22 goals after joining Tottenham Hotspur. Pearce staying at the City Ground proved to be vital for the club, as he led them to promotion the following season.

Central midfield: Bryan Robson
Although he lifted the trophy with regular team captain Steve Bruce, Robson became the first official Premier League-winning skipper in 1993. After over a decade at Man Utd he finally helped the Red Devils to their first championship win in 26 years. Despite having a reduced role in the side he fittingly scored their last goal of the season, in a 2-1 win against Wimbledon. In May of the following year, Robson took the player-manager job at Middlesbrough and won the Second Division with the Teesiders in 1994/95.

Right wing. Chris Waddle
Geordie hero Waddle won the FWA Footballer of the Year award as Sheffield Wednesday finished in an impressive seventh-place in the Premier League’s maiden season. Waddle also helped Wednesday reach the FA Cup final, where Yorkshire-born David Hirst took the game to a replay in a 1-1 draw with Arsenal. Waddle scored an equaliser in the replay to take the game to extra-time, but the Gunners went on to win 2-1. They had beaten Wednesday by the same scoreline in the League Cup final a month before, but the Owls gained a measure of revenge by finishing above the north London club in the league.

Left wing: Ryan Giggs
The-then teenage Giggs hugely impressed the Old Trafford faithful as he helped Man Utd win the league and also bagged the PFA Young Player of the Year award for the second year running. Welsh wonder Giggs, along with Andrei Kanchelskis and West Midlands boy Lee Sharpe provided the Red Devils with superb displays on the flanks, able to devastate the gritty defences of the era. Giggs would go on to win another 12 Premier League titles.

Forward: Eric Cantona
Cantona joined Man Utd mid-season from reigning champions Leeds United, whose title defence went terribly as they finished 17th. The Frenchman’s influence helped drive the Red Devils to the title and he ended up having the unique honour of being the only person to win the last First Division title and the first Premier League title. It was a season of firsts for Cantona as he scored the competition’s maiden hat-trick, topped the assist charts and became the first of his countrymen to win the Premier League.

Striker: Alan Shearer
The man who could’ve played for Man Utd if Fergie allowed him to take over Cantona’s penalty duties, Shearer signed for Blackburn at the start of the 1992/93 season. Rovers were splashing the cash on their return to the top flight after winning the Second Division play-off final the season before. He joined for an English record £3.6million and quickly began to repay his fee by scoring twice in Blackburn’s opening game against Crystal Palace: an instant Premier League classic 3-3 draw. Despite being injured for much of the campaign, Shearer bagged 16 goals and Rovers finished in an impressive fourth place. Bigger things were to come at Ewood Park, though.