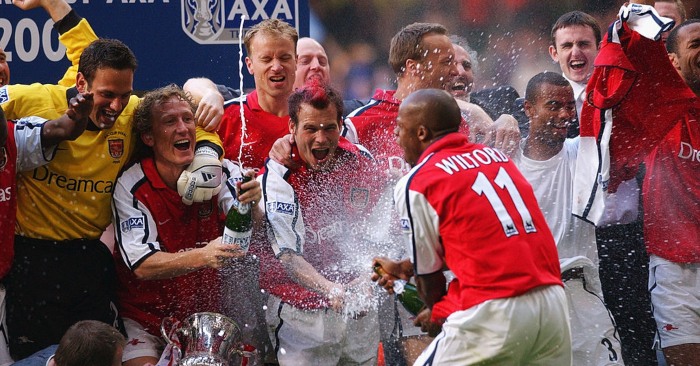 Cast your mind back to the early noughties. Here are the headliners from the 2001/02 season.

Goalkeeper: Edwin Van der Sar
After winning the 2001 First Division title, Fulham played top-flight football for the first time since 1968 in the 2001/02 season. Reinforcements were expected at Craven Cottage to help the team stay in the Premier League but the arrival of one of the world’s best goalkeepers created headlines in the build-up to the opening day of a new campaign. Edwin Van der Sar ousted Northern Irish hero Maik Taylor from the side and had an immediate impact as Fulham finished the season with just 44 goals conceded, the best record outside the top six and less than Van der Sar’s future employers, Manchester United.

Right-back: Henning Berg
Blackburn Rovers won promotion to the Premier League alongside Fulham, as runners-up in the 2000/01 First Division season. Rovers had suffered relegation from the top flight in 1999, around the same time Norwegian legend Henning Berg was helping Manchester United win a treble. In the autumn of 2000, Berg returned to Ewood Park to once again play for the club where he won his first Premier League title. Rovers’ return to the big-time ended with a top-half finish and a trophy, with Berg captaining the side to a League Cup win against Tottenham Hotspur.

Centre-back: Jaap Stam
Dutch defender Jaap Stam had been instrumental in Manchester United’s success in the late nineties and early noughties, with the club winning the Premier League title in every season since his arrival in 1998. However, just one game into the 2001/02 campaign, Stam was sold to Lazio after allegations in his book suggested he was ‘tapped-up’ by United manager Alex Ferguson before joining the Red Devils. Veteran defender Laurent Blanc arrived at Old Trafford as Stam’s replacement and initially struggled, with many suggesting the 35-year-old was too old to adapt to Premier League football.

Centre-back: Sol Campbell
The controversy surrounding Stam’s transfer may caused a ripple of discontent amongst Manchester United supporters but it was nothing compared to the tidal wave of rage felt by Tottenham Hotspur fans when Sol Campbell walked out of White Hart Lane and travelled a short way down the road to Highbury. The C-Team defender spent his first season at Arsenal alongside Gunners legend Tony Adams, with the two great centre-backs helping the side to a Premier League title and an FA Cup final win against rivals Chelsea. The dream defensive partnership only lasted one season, with Adams retiring before the 2002/03 campaign.

Left-back: Jon Arne Riise
Riise arrived at Liverpool in the summer of ’01 and made an instant impact at the club, scoring the opening goal for the Reds in a 3-2 win over Bayern Munich in the UEFA Super Cup. Alongside Jamie Carragher and Sami Hyypia, Riise was part of the league’s meanest defence, with Liverpool conceding just 30 goals on their way to a second-place finish. Although the side fell frustratingly short of a maiden Premier League title, they produced memorable performances with two victories against rivals Manchester United, and two thrashings of Ipswich Town. The Tractor Boys needed a positive result against Liverpool on the last day of the season to avoid the drop but Riise wasn’t feeling charitable, bagging two first-half goals in a 5-0 win.

ON THIS TRANSFER DAY: In 2001, Liverpool signed John Arne Riise from Monaco for £4m.

Right wing: Sylvain Wiltord
Arsenal faced reigning champions Manchester United at Old Trafford in the May of ’02 with a chance to win the Premier League in their rivals’ backyard. Sylvain Wiltord scored the title-clinching goal as the Gunners finally got one over on United, after finishing as runners-up to the Red Devils in the previous three campaigns. The only downside to Arsenal’s year was a disappointing Champions League campaign, failing to reach the quarter-finals despite impressive wins against Italian giants Juventus and eventual finalists Bayer Leverkusen during the tournament.

Central midfield: David Beckham
Argentine international Juan Sebastian Veron’s arrival at Manchester United led to speculation surrounding David Beckham’s future at Old Trafford during the 2001/02 season. Veron did go on to become the first of his countryman to win a Premier League title in 2003 but his stay in England didn’t bring out the best in him. Meanwhile, the iconic Beckham continued to produce for club and country, with the London-born star scoring a famous free-kick against Greece in October 2001 to secure World Cup qualification and send England fans delirious. Fittingly, Beckham went on to score a match-winning penalty against Argentina the following summer and exorcised the demons of 1998 after his sending-off against the South American side at the previous World Cup.

Central midfield: Claudio Reyna
The fight to avoid relegation from the Premier League was incredibly tense during the 2001/02 season, with every team below sixth not out of danger until the final few games of the campaign. Sunderland endured a terrible end to the season, winning just one in nine and only just avoiding the drop. Crucially, the one win was against fellow relegation candidates Leicester City, with USA international Claudio Reyna scoring twice in the six-pointer. The Foxes went down, alongside Derby County and Ipswich Town, whilst Sunderland finished in the all-important 17th spot thanks to Reyna’s double.

Left wing: Freddie Ljungberg
Swedish legend Freddie Ljungberg was in impressive form during the 2001/02 campaign, with his crucial role in helping Arsenal to the league title earning him the Premier League Player of the Season award. Ljungberg bagged a crucial winning goal against title rivals Liverpool at Anfield and scored with a breathtaking solo goal in the FA Cup final too, after a mesmerising run from his own half. Ljungberg’s club-mate Robert Pires also had an outstanding 2001/02 season. The French winger finished top of the assist charts and his vital contribution to the Gunners’ cause led to him being named the FWA Footballer of the Year.

Striker: Ruud Van Nistelrooy
Van Nistelrooy arrived at Old Trafford in the summer of 2001, a year after a previous transfer to Manchester United was scuppered by injury problems. The Dutch striker was an instant success in the Premier League, scoring 23 times on his way to winning the PFA Player of the Year award. Despite finishing third, the Red Devils ended the season as the highest scorers in the division but suffered more disappointment in the Champions League with a frustrating away-goals loss in the semis against Bayer Leverkusen. United boss Alex Ferguson went back on his original decision to retire at the end of the season, giving fans hope of another European title. Fergie did win another Champions League title eventually but Van Nistelrooy never made it past the last four during his career.

Striker: Robbie Fowler
Merseyside-born Robbie Fowler left his local club for Leeds United during the season, much to the dismay of Liverpool fans. Fowler was rumoured to have had a tempestuous relationship with Reds manager Gerard Houllier and assistant Phil Thompson and departed despite scoring a hat-trick in one of his final games for the club. Houlllier had to take time out of the game during the season after falling ill in a match against Leeds in October, with Thompson taking charge until the following March. Fowler ended the season with 15 goals, as his new club narrowly missed out on a Champions League place to Bobby Robson’s Newcastle United. That fifth-place finish would later prove to be disastrous for Leeds.