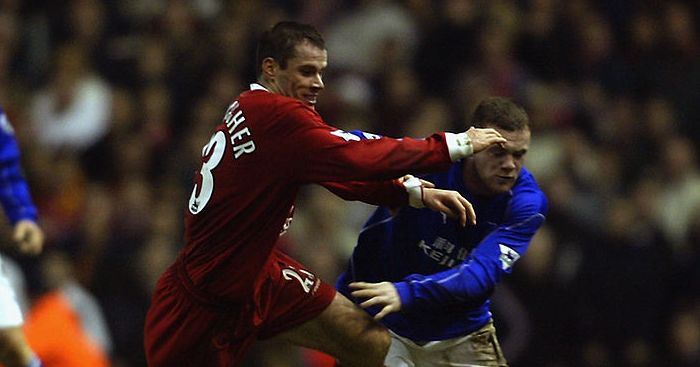 Another blast from the past, here are the headliners from the 2002/03 Premier League season…

Goalkeeper: Peter Schmeichel
Manchester United’s legendary former goalkeeper Peter Schmeichel joined rivals Manchester City in the 2002/03 Premier League campaign, both his and Maine Road’s last season in professional football. Schmeichel’s record in the Manchester derby was exemplary, having never lost a match to City whilst playing for United. The Danish hero continued the tradition in City colours, as they beat United 3-1 in the final derby at what had been their home for 80 years. Tragically, Marc Vivien Foe, one of the City players in that match, died in the summer of 2003 whilst playing for Cameroon.

Right-back: Jason McAteer
After narrowly escaping relegation in the 2001/02 season, Sunderland fans hoped the 2002/03 campaign would be far less nerve-wracking. It was, but for all the wrong reasons. Jason McAteer scored a match-winning goal for Sunderland against Leeds United at Elland Road early on in the season, with the victory giving fans false hope. That result turned out to be the first of just four wins in a disastrous campaign, as they lost every game from the middle of January until the end of the season. There was to be no late drama as it became obvious Sunderland were dead and buried long before their fate was confirmed in mid-April.

Centre-back: Sami Hyypia
One of Sunderland’s four victories came in a shock December win over a Liverpool side that had led the table the previous month. A dismal Christmas period saw Gerard Houllier’s team slip behind in the title race, although they did manage to lift the League Cup in the new year as Sami Hyypia captained the side to victory over fierce rivals Manchester United in the final. However, the Red Devils got their revenge with a 4-0 win in April, with Hyypia sent off in the early stages. The result damaged the Merseyside club’s top-four prospects and left them needing a positive result against Chelsea on the final day of the season to secure Champions League qualification. Hyypia put Liverpool ahead in the match but Chelsea turned the game around to leave the Reds in a disappointing fifth place.

Centre-back: Rio Ferdinand
After joining Leeds United for a record fee in the 2001/02 season, Rio Ferdinand made another huge transfer ahead of the 2002/03 season. Manchester United spent heavily on the London-born defender as Leeds desperately needed the money after getting into debt. The lack of Champions League football at Elland Road resulted in player sales becoming essential to keep the club afloat, as Irish legend Robbie Keane, Lee Bowyer, Jonathan Woodgate and Merseyside hero Robbie Fowler were all sold alongside Ferdinand. The Red Devils’ new star centre-back helped his side to the best defensive record in the league en-route to another title.

Left-back: Ian Harte
Long-serving left-back Ian Harte was one Leeds player who remained at Elland Road, with the Irishman playing a huge role in keeping his side in the division. Leeds battled relegation all season and with two games left to play, it looked as if a side that had not long reached a Champions League semi-final could well face the drop. Harte scored in a surprise win over Arsenal in the penultimate game of the campaign, pushing his side closer to safety whilst also ending the Gunners’ title dreams. He was on the scoresheet again on the final day of the season, netting the opening goal against Aston Villa as Leeds found form just in time to secure their Premier League status for another year.

Right-wing: David Beckham
By 2002, the iconic David Beckham had become one of the few footballers to transcend the sport, his name familiar in every corner of the world. His celebrity status wasn’t to the liking of Manchester United boss Sir Alex Ferguson, with the legendary manager kicking a boot towards Beckham’s face during a row. The two continued to work together until the end of the season, with their efforts guiding United to a Premier League title. However, the Scottish manager felt Brand Beckham was overshadowing on-pitch matters at Old Trafford and the England captain left for Real Madrid in the summer of 2003.

Central midfield: Jermaine Jenas
The 2002/03 season was the last campaign that saw Newcastle United finishing in the top three to date – although that may well change in the future if the new owners spend heavily. Bobby Robson had steadied the club and with Geordie legend Alan Shearer finding the net regularly the Magpies mounted a title challenge. J-Team midfielder Jermaine Jenas had a fine season, too, the teenager putting in assured performances and scoring vital goals, including a winner against future club Tottenham. Jenas was named PFA Young Player of the Year at the end of the season, but his side’s title bid was emphatically vanquished by Manchester United in mid-April. Jenas scored the opening goal in a 6-2 defeat.

Central midfield: Jay-Jay Okocha
Skilful midfielder Jay-Jay Okocha was one of the most famous names in world football in the late 90s and early 200s, spending most of his time being linked to a host of top teams. Surprisingly, he signed for Premier League strugglers Bolton Wanderers in 2002 and became a cult hero. His crucial winning goal against Middlesbrough on the last day of the season ensured the Trotters finished in 17th place and stayed up. Bolton’s win also resulted in a shocking relegation for a talented West Ham side that included Paolo Di Canio, Joe Cole, Michael Carrick, David James, Glen Johnson and golden oldie Nigel Winterburn.

Left-wing: Jesper Gronkjaer
Jesper Gronkjaer may not have been the most famous name in Chelsea’s cosmopolitan squad of the era but he scored one of the most vital goals in their history at the end of the 2002/03 season. The Blues played Liverpool in May in a straight shoot-out between the two sides for fourth place. Gronkjaer bagged the winning goal to secure Chelsea’s Champions League qualification, which led to Russian billionaire Roman Abramovich purchasing the club six weeks later. Big things were brewing at Stamford Bridge.

Striker: Wayne Rooney
After years of Premier League turmoil, Everton finally had a season to cheer about in the 2002/03 campaign, especially after the debut of teenage sensation Wayne Rooney. The local lad scored a famous goal against reigning champions Arsenal, becoming the youngest-ever Premier League goalscorer at the time. He continued to impress for the Toffees throughout the season as he helped the side to a seventh-place finish. His form led to an England call-up and he became the country’s youngest player in the February of 2003.

Striker: Thierry Henry
Thierry Henry continued to produce the goods for Arsenal in the 2002/03 season, the influential forward being named as the PFA Player of the Year. The Frenchman scored a wonderful goal against Spurs and netted twice against Manchester United in the biggest game of the campaign in mid-April. The 2-2 draw gave Arsenal the initiative in the title race, with the Gunners three points behind United but with a game in hand and a superior goal difference. Henry scored in the following match against Middlesbrough in a 2-0 win that made Arsenal favourites. However, despite Henry bagging an equaliser against Leeds United in early May, Arsenal went on to lose the match and their title with it. An FA Cup win later that month did give Henry and his team-mates something to smile about at the end of hard-fought season.