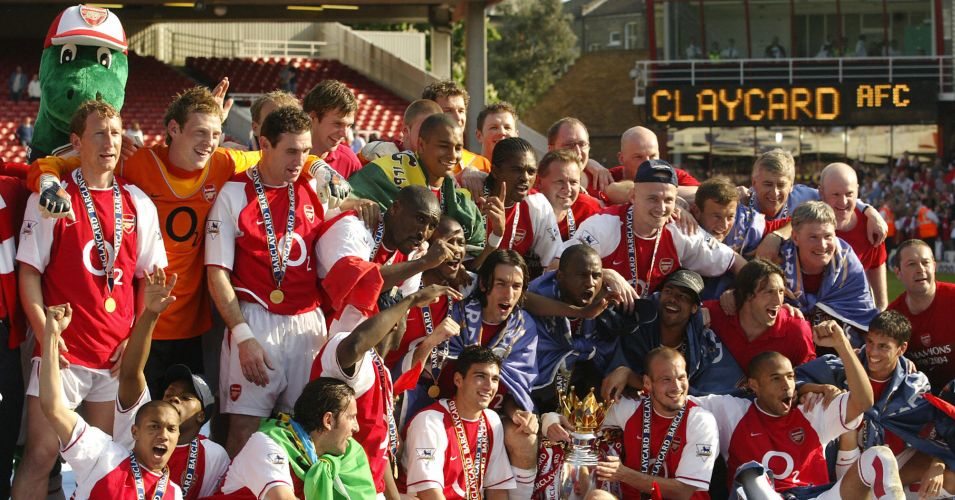 Remember the season before Euro 2004? Arsenal fans certainly do. Here are the headliners/Invincibles from 2003/04…

Goalkeeper: David Seaman
Seaman’s Arsenal career ended on a huge high after winning the FA Cup at the end of the 2002/03 season but his departure before the commencement of the 2003/04 campaign saw him miss out on something far more remarkable. Jens Lehmann arrived at Highbury to replace Seaman, with the Yorkshire-born ‘keeper joining a Manchester City side playing at the City of Manchester stadium for the first time. The Citizens only lost once in the first two months of the season, with that one defeat coming against Arsenal. However, Seaman suffered an injury in the January of ’04 and retired, with his former England team-mate David James joining from recently relegated West Ham United to take his place. A few months later Jens Lehmann became an ‘Invincible’ and the first German to win the Premier League.

Right-back: Frank Sinclair
Leicester City played Premier League football once again in the 2003/04 season, after finishing as First Division runners-up in the previous campaign. A hard-fought campaign was made more taxing following controversial off-pitch headlines. Frank Sinclair, Paul Dickov and Northern Irish hero Keith Gillespie were accused of sexual assault after the side went to La Manga in the March of ’04 for a training break. The lurid claims were proved to be false but by that time Leicester had already dropped back into the second tier, with Sinclair leaving the club in the summer.

Centre-back: Martin Keown
Arsenal faced reigning champions Manchester United six games into the 2003/04 Premier League season, with the trip to Old Trafford becoming a defining moment in the campaign. With the match delicately poised at 0-0, Keown bundled over Diego Forlan in injury-time to give Manchester United the chance to win the game from the spot. Ruud Van Nistelrooy hit the subsequent penalty against the bar, with Keown’s aggressive celebrations beside the Dutch striker making the headlines after the match.

Keown & Lauren mixing it up – Ruud deserved it. CR7 trying to front up with Edu…Ronny realised he was wrong & then he started to back up like a hard drive. pic.twitter.com/6ow2khOOaW

Centre-back: Rio Ferdinand
One of the Manchester United players in the Battle of Old Trafford was Rio Ferdinand, who made headlines himself after missing a random drugs test. The London-born centre-back received an eight-month ban following the incident, with an independent tribunal finding Ferdinand guilty of misconduct. Manchester United’s form dipped without their record-breaking defender and a 4-1 defeat to rivals Manchester City in the March of ’04 highlighting his value to the side.

Left-back: Wayne Bridge
After Russian billionaire Roman Abramovich purchased Chelsea in the summer of 2003, new signings were expected at the club as manager Claudio Ranieri looked to build a squad capable of winning the Premier League and the Champions League. Stamford Bridge welcomed Wayne Bridge, as well as Hernan Crespo, Juan Sebastian Veron, Adrian Mutu, Joe Cole, Glen Johnson, Claude Makelele and Irish hero Damien Duff. Despite the talent at Ranieri’s disposal, Chelsea could only finish in second place, 11 points behind the unbeaten Arsenal. However, Bridge did score a crucial goal in the Champions League when the two London clubs met in an all-English quarter-final. With the score tied at 2-2 on aggregate in the second leg, Bridge rifled in a dramatic late goal to end Arsenal’s hopes of a maiden Champions League title and send Chelsea into the last four.

#OnThisDay in 2004, Wayne Bridge scored the late winner to knock Arsenal out of the Champions League and send us to the semi finals! Iconic 🙌 #CFC

Right wing: Cristiano Ronaldo
Just days before Chelsea ended Arsenal’s dreams of a double, Cristiano Ronaldo helped Manchester United quash the Gunners’ treble dreams. The Red Devils progressed to the FA Cup final after defeating Arsenal in the last four and teenage sensation Ronaldo went on to score the opening goal in the showpiece against Millwall. United’s 3-0 win against the second-tier side in the final ensured they ended the season with a trophy, with Ronaldo making plenty of headlines throughout the campaign after taking over the iconic number 7 shirt from David Beckham.

Central midfield: Patrick Vieira
Vieira lifted the Premier League trophy at the end of the 2003/04 season as captain of Arsenal and an ‘Invincible’ but the Frenchman almost put a spanner in the works after his sending-off early on in the season. Vieira’s kick out at Ruud Van Nistelrooy at Old Trafford and subsequent red card saw Arsenal fans grimace as their heroes held on for a crucial draw. The unbeaten streak came under jeopardy again in Vieira’s injury enforced absence, with nerve-wracking draws against Fulham and Leicester City but the influential skipper ended up sealing the title in the best way possible. A positive result against local rivals Tottenham in April would confirm Arsenal as Premier League champions at White Hart Lane and Vieira gave the travelling fans some instant cheer, putting the Gunners ahead in the first few minutes to ensure there’d be no doubt surrounding the trophy’s destination.

Central midfield: Frank Lampard
Chelsea’s second-place finish in the 2003/04 season was aided by the fantastic form of Frank Lampard. The L-Team star hit double figures in the goalscoring charts for the first time in his career and was nominated for the PFA Player of the Year award. He made a huge contribution for England at the European Championships in the summer of 2004 too, scoring England’s opening goal in a painful 2-1 defeat to France and hit the net again against Croatia as the side progressed to the quarter finals. England faced Portugal for a spot in the last four and Lampard scored a vital equaliser in extra-time to send the game to penalties. Naturally, the Three Lions went out.

Left wing: Harry Kewell
Leeds United continued to sell players in the 2003/04 season as financial woes cast a cloud over Elland Road. Despite a plethora of departures in the previous campaign, Kewell’s heroics had guided Leeds to safety in the 2002/03 season. However, his subsequent transfer to Liverpool proved to be a step too far, with Leeds suffering relegation to the Championship at the end of the campaign. Kewell helped his new side to a fourth-place finish and Champions League qualification with it, as Liverpool just about edged out Newcastle United and Aston Villa. Fourth wasn’t enough to save Gerard Houllier’s job, with Rafa Benitez replacing the Frenchman. It turned out to be a wise move.

Striker: Teddy Sheringham
Teddy Sheringham left Tottenham Hotspur at the end of the 2002/03 season, with the club bringing in Frederic Kanoute and Bobby Zamora to replace the 37-year-old. However, Sheringham still had plenty left in the tank, with the golden oldie continuing to produce the goods for newly-promoted Portsmouth in the 2003/04 campaign. He scored the side’s first ever Premier League goal in a 2-1 victory over Aston Villa and bagged a hat-trick ten days later against Bolton Wanderers. His efforts helped Pompey to mid-table safety in 13th place, one above Spurs.

Striker: Thierry Henry
Invincible and unplayable, Thierry Henry was at his imperious best during the 2003/04 season. The influential forward scored 30 Premier League goals on his way to winning the Golden Boot, including a stunning hat-trick against Liverpool in April as Arsenal twice came from behind to win 4-2 and preserve their unbeaten streak. Just a week later, Henry went one better and bagged four against a doomed Leeds United side, with one of the goals a marvellous Panenka penalty that gave Leeds defenders a break from chasing shadows all game. The Frenchman was the obvious choice for the PFA and FWA Player of the Year awards. What a player.