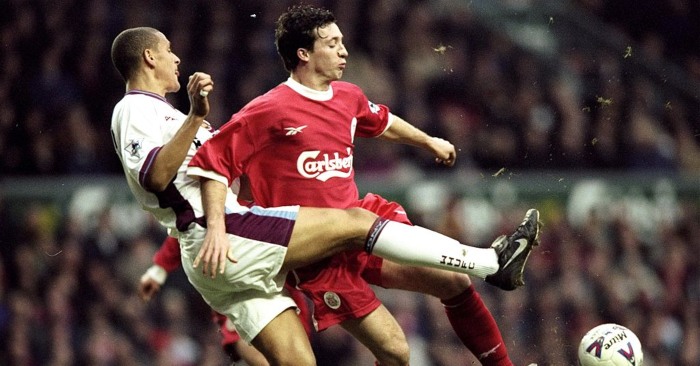 Goalkeeper: Brad Friedel
There’s quite an abundance of talent in the F-Team goalkeeping department, with current Premier League shot-stoppers Lukasz Fabianski and Ben Foster joined by 1994/95 Premier League winner Tim Flowers. Flowers will have to settle for a spot on the bench here though as fellow Blackburn Rovers alumni Brad Friedel gets the jersey. Friedel was part of the Rovers side that won promotion to the top flight as First Division runners-up in 2001 and emerged victorious in the League Cup final against Spurs the following year. He ended up playing for the vanquished opponents that day in the twilight of his career (what a free), making the last of his 450 Premier League appearances in the 2013/14 season. If you fancy a goalkeeper challenge, try naming another United States international ‘keeper eligible for F-Team selection.

Right-back: Steve Finnan
Part of the Fulham side that finished above Friedel’s Blackburn Rovers side in 2001, Steve Finnan proved himself to be one of the London side’s finest players in their nascent Premier League campaigns. Liverpool signed him in 2003 and he went to win a Champions League with the Reds in 2005 as part of a back line that included club legends Jamie Carragher, Sami Hyypia and…erm…Djimi Traore (Norwegian hero Jon Arne Riise played in midfield that day). The Irish international lifted the FA Cup the following year with Riise at left-back and Traore safely on the bench as Liverpool defeated West Ham in the final. Finnan goes down as one of Liverpool’s greatest right-backs of the Premier League era alongside the A-Team’s Trent Alexander-Arnold and the woefully undercapped Rob Jones.

#sportfactoftheday 41. Ex-Liverpool full-back Steve Finnan is the only player to have played in the top five leagues in English football, the World Cup, the Champions League, the UEFA Cup and the Intertoto Cup.

Centre-back: Rio Ferdinand
Has there been a more influential defender in the Premier League than six-time winner Rio Ferdinand? At the turn of the century the managers of top English sides knew that they needed more than the run-of-the-mill fearsome bruiser at the back to compete in Europe and ball-playing centre-backs were a rare breed. Rio Ferdinand fit the bill and twice broke the world transfer record for a defender as Leeds United and then Manchester United paid a premium for his services. The doomed Leeds project got Ferdinand to a Champions League semi-final, but with the Red Devils the London-born star went all the way as he captained the club to victory in 2008 against Chelsea.

Centre-back: Jose Fonte
Despite a frankly dreadful spell at West Ham, Jose Fonte was superb during his time at Southampton. He was with the Saints as they won successive promotions to rise from League One to the Premier League. Fonte was 28 by the time he made his first appearance in England’s top flight and his continuing good form resulted in a call-up from Portugal in 2014. He made his international debut at 30 years of age, with late bloomers a common theme at St.Mary’s as team-mate Rickie Lambert became a late debutant for England. Unlike Lambert, Fonte continued to appear for his country and won the 2016 European Championships as well as the 2018/19 Nations League tournament.

Left-back: Christian Fuchs
Fuchs wouldn’t have expected to win a Premier League title at the end of his first season in English football, but Leicester City weren’t in the mood for conforming to expectations in the 2015/16 campaign. Fuchs rounds off the F-Team’s backline, although there are some famous options on the bench. Former England international Terry Fenwick played Premier League football late in his career, although being part of Swindon Town’s feckless defence in the 1993/94 season does go against him. Other eligible defenders include Chris Fairclough, Mark Fish, Gianluca Festa, Albert Ferrer and Rio’s brother Anton.

Not ‘better’ as a player, no, but getting Christian Fuchs was a great move for Leicester. Free agent on a ‘low’ salary, absolutely crucial in title win.

Defensive midfield: Fabinho
The midfield options start with Fabinho, although the shape of the side may change in the future if Manchester United’s new star man Bruno Fernandes continues to impress. It may be slightly premature to include the Portuguese playmaker but Liverpool’s Fabinho has done more than enough to earn a starting spot in the team after a season and a half in the Premier League. The Brazilian won a Champions League in his first year at Liverpool as the side came frustratingly close to winning a maiden Premier League title too. This campaign, it looks like it will finally be their year, if the season can be completed and all those record-breaking exploits aren’t expunged.

Defensive midfield: Fernandinho
Fabinho still has a long way to go if he is to match the Premier League achievements of his fellow countryman Fernandinho. The Manchester City legend has been a vital part of three title-winning sides whilst at the club and continues to impress at the age of 34. Fernandinho and Fabinho get starting spots in the F-Team’s midfield but the bench would include Scottish star Darren Fletcher, former Tottenham player Steffen Freund and future Tottenham player Marouane Fellaini.

Fernandinho fights for the club and badge… literally 😂😂 pic.twitter.com/FK5P3Z9MSw

Central midfield: Cesc Fabregas
F-Team boss Sir Alex Ferguson may not be too keen on having Cesc Fabregas in his squad, let alone the first XI. Not only does the Spaniard count Ferguson’s former rivals Jose Mourinho and Arsene Wenger as his two favourite managers, but the Battle of the Buffet issue would be a huge elephant in the dressing-room. After goals from Ruud van Nistelrooy and young England debutant Wayne Rooney ended Arsenal’s 49-game unbeaten streak in 2004, tempers flared and fists flew. Fabregas got involved by hurling a slice of pizza into the melee but accidentally hit Manchester United manager Ferguson instead. If Fergie can get over his Sloppy Giuseppe grievances, he would have one of the Premier League’s all-time great midfielders at his disposal. With the Brazilian duo of Fabinho and Fernandinho protecting him, Fabregas would have the freedom to dictate play and create chances for the F-Team’s fantastic front three.

Forward: Roberto Firmino
The first of the F-Team’s famous forward line is Liverpool’s Roberto Firmino, already the Premier League’s highest-scoring Brazilian. Currently second in that particular list is Firmino’s former team-mate and C-Team star Philippe Coutinho. Whilst Coutinho seemed like the star attraction at Anfield, Firmino was the player Liverpool couldn’t afford to lose and when his fellow countryman left for Barcelona in 2018, the club wisely invested the incoming money on the back line rather than in attack. With Firmino intelligently orchestrating the play whilst Mane and Salah grabbed the bulk of the goals, Liverpool won their sixth European Cup and will more than likely win their 19th top-flight title in the near future.

Forward: Robbie Fowler
Firmino’s exploits have already made him a hero at Anfield, but to overtake Robbie Fowler’s God status there is nigh-on impossible. Meresyside-born Fowler burst onto the Premier League season in the early nineties and quickly proved himself to be a natural goalscorer as he won the PFA Young Player of the Year Award in the 1994/95 and 1995/96 seasons. Fowler and Steve McManaman were the key men of the era at Liverpool as they continually challenged near the top of the table but failed to win the league. Silverware did arrive in 2001 as the club completed a treble of the two domestic cups and the UEFA Cup, with Fowler scoring in the European showpiece and the League Cup final.

Sometimes I sit there and think how underrated Robbie Fowler & Andy Cole were. Like they dont get mentioned enough at all when it comes to the best premier league player

Forward: Les Ferdinand
The 1995/96 PFA Player of the Year came agonisingly to winning the league that season, with Ferdinand’s 25-goal tally firing Newcastle United to second place. Despite winning a League Cup with Spurs, he never won a Premier League title…at least everyone loves him though. The F-Team has a fierce force of firepower on the bench, with the ferocious Duncan Ferguson as the standout back-up. Other options include the Nordic trio of Tore Andre Flo, Jan Age Fjortoft and Mikael Forssell as well as Manchester United flops Diego Forlan and Radamel Falcao. They were both pretty special outside of England though.