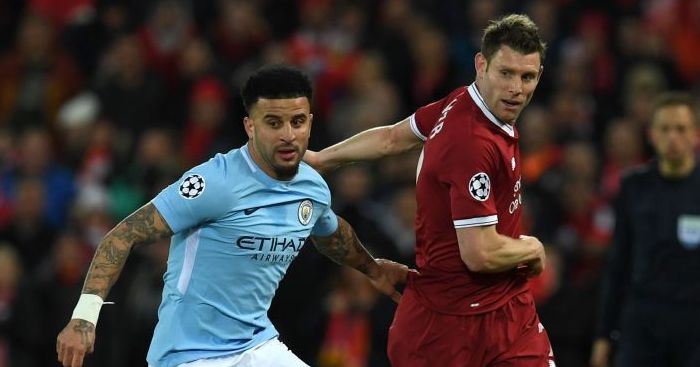 We ruled out those born on Teesside because it’s not proper Yorkshire. Think your region’s XI can beat this lot? Mail us at theeditor@football365.com

Goalkeeper: David Seaman (Rotherham)
Rejected by Leeds United, Seaman bravely ventured down south to Peterborough. Spells at Birmingham and QPR followed but it was with Arsenal that Seaman became a genuine Premier League icon, winning nine major trophies and amassing the majority of his 75 England caps. He has never lost his accent and is fond of saying that he “grew up in a hard-grafting Yorkshire family – dad worked at the local steelworks five minutes away”. We wonder what he made of the bloody ponytail.

Right-back: Kyle Walker (Sheffield)
His £50m move from Tottenham to Manchester City was many people’s ‘game’s gone’ moment, but City were simply buying the best right-back in the country for a team that prizes full-backs a little more than most. Walker has basically spent a decade in the Premier League and it’s hard to argue that he has not been that decade’s best right-back, despite all the recency bias surrounding Trent Alexander-Arnold. Still a Blade at heart, he has openly expressed a desire to end his career back at the Lane.

Kyle Walker, Harry Maguire and John Stones. All born within 30 minutes of each other.

Centre-half: Harry Maguire (Sheffield)
The most expensive Yorkshireman in the history of football, Maguire is now the Manchester United captain. Which must still seem extraordinary to the boy born in Sheffield who joined the Blades as an 11-year-old. “I was a ball boy week in, week out at Bramall Lane from when I was 14 until 16 or 17. Then, I broke in and made my debut,” said Maguire. He then joined Hull, had a loan spell at Wigan, moved to Leicester and then to Old Trafford. That forehead remains pure Yorkshire, though.

Centre-half: John Stones (Barnsley)
A man who grew up in Thurgoland should never really be the subject of a £47.5m transfer but that was the fate of Barnsley boy Stones, who is somehow still only 25. Written off as a has-been even when winning the second of two Premier League titles, he has not even reached what many consider to be peak age for a centre-half. He has undoubtedly lost his way at City – not helped by personal issues – but he is a classy if error-prone defender on his day. Like Maguire, he has wisely opted never to move too far south.

Left-back: Danny Rose (Doncaster)
A product of the Leeds United Academy, he was sold by Leeds United to raise funds before he had even made his debut. He has spent much of his career trying to move back north and after more than 200 appearances for Tottenham over 13 years at the club, he has now found his way up to Newcastle United on loan. There is no doubt that injury has left Rose a shadow of the player who formed a formidable full-back pair with Walker at Spurs. And he may well end his career on lists like these.

Right wing: Aaron Lennon (Leeds)
Another product of the Leeds United Academy, but at least Lennon pulled on a Leeds shirt before he was sold to Tottenham for a cut-price fee. Until the day he hangs up his boots, he will be linked with a return there. One of a glut of speed merchants who flitted in and out of the England team, Lennon is now approaching 400 Premier League games, though he is now reduced to a bit-part role at Burnley. Unlike the man at left-back, he has at least won a trophy.

Consistently a mind-blowing fact that Aaron Lennon is only 32 years old, but also played for Leeds United in the Premier League. pic.twitter.com/rDIwA981Kp

Central midfield: James Milner (Leeds)
A professional Yorkshireman with over 500 Premier League games, over 50 Premier League goals, two Premier League titles, three other major trophies and a tranche of other trinkets. He will probably play until he is approximately 48 and still be the fittest player in pre-season. ‘E’s t’king.

Central midfield: David Batty (Leeds)
Leeds-Blackburn-Newcastle-Leeds is a wonderfully 90s career path from another Leeds man who was as hard as nails. He played in the Leeds team that won the last First Division title and then the Leeds team that reached the semi-finals of the Champions League. In between he fought with Graeme Le Saux as Blackburn slumped after their title win and was then the man trying to hold back the tide for Kevin Keegan’s nearly men at Newcastle. It was famously said that he didn’t actually like football, which probably makes him the most Yorkshire of all contrary Yorkshiremen.

He really is. But he didn’t actually play for Hull until he was 30, having learned his trade at Tottenham after leaving Lilleshall as a 16-year-old. Five years later he was citing homesickness as he left Spurs for Middlesbrough before playing for Everton, Liverpool and Leeds in a nomadic career which saw him never really loved by anybody, though he did win the most plastic of trebles with the Reds. It was always Hull where he really belonged and he played, coached and managed there.

Striker: David Hirst (Barnsley)
Perhaps most famous to younger readers as the man Sir Alex Ferguson tried to sign before he settled on Eric Cantona, that story does Hirst a disservice because he was a brilliant, complete goalscorer who combined pace, power, strength, hold-up play, creativity and the instinct of a poacher. The Premier League did not see the best of Hirst, but he still managed to reach two domestic finals with the Owls in 1993. Hirst is still to be found at Hillsborough on most match-days, doing a little bounce to prove he is not a Blade.