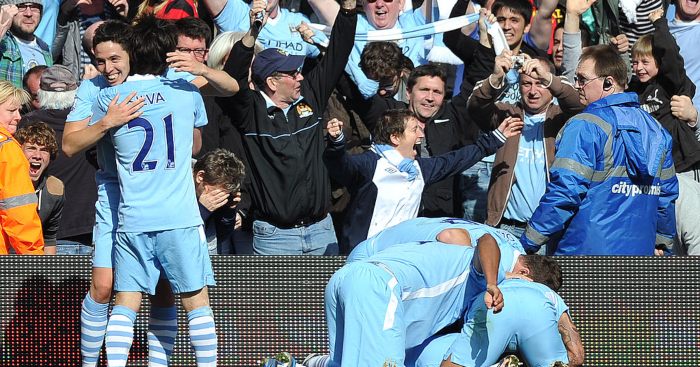 Here are the headliners for the 2011/12 season, when the neighbours became more than noisy…

Goalkeeper: David de Gea
After the retirement of legendary goalkeeper Edwin Van der Sar, Manchester United signed highly rated 20-year-old ‘keeper David de Gea from Atletico Madrid in the summer of 2011. As the Red Devils’ new number one, the Spaniard’s performances were put under the media microscope and although he produced a number of fine displays, his mistakes made the headlines. A heavy, morale-sapping 6-1 defeat to rivals Manchester City did little to inspire confidence and questions were raised surrounding De Gea’s long-term suitability at Old Trafford.

Right-back: Kyle Walker
Tottenham Hotspur qualified for the Champions League again after finishing in fourth spot in the 2011/12 season. Young right-back Kyle Walker was one of the standout performers of the campaign, with the Yorkshire-born defender winning the PFA Young Player of the Year award as well as earning his first England cap in the November of ’11. He won the affection of the White Hart Lane crowd with a blistering winner against Arsenal but unfortunately for Tottenham fans, manager Harry Redknapp’s ongoing legal trial and speculation linking him to the England job overshadowed an otherwise promising season.

Centre-back: John Terry
The position of England manager became vacant in 2012 due to the resignation of Fabio Capello, with the Italian stepping down after the FA stripped John Terry of his national team captaincy. The Chelsea defender made the headlines for all the wrong reasons after allegations of racist language towards Anton Ferdinand in a match against QPR, with the situation causing a headache for new England boss Roy Hodgson at Euro 2012. Anton’s brother Rio was controversially left out of the squad, whilst Terry was included. The full-kit shenanigans in the Champions League final did little to improve his public image either, with Terry appearing in his Chelsea shirt, shorts and socks despite being suspended.

Centre-back: Vincent Kompany
The title-winning captain and Premier League Player of the season, Vincent Kompany became the first of his countrymen to win the competition in the 2011/12 season. The Belgian’s leadership proved vital, especially after former captain Carlos Tevez’s refusal to play against Bayern Munich in the Champions League. The Argentinean forward’s subsequent golfing sojourn made the headlines and threatened to de-rail City’s season but the side rallied and capitalised on Manchester United’s slip-up late in the season to win the Premier League title in the most dramatic fashion possible.

Kompany is top 3 of all time captain in the PL, always turned up when needed. His goal against Man U in 2012 and Leicester last season are among most iconic the league has seen.

Left-back: Gael Givet
Blackburn Rovers defender Gael Givet and Bolton Wanderers midfielder Fabrice Muamba both suffered heart-related scares during the 2011/12 season. Muamba’s collapse in an FA Cup quarter-final match was particularly harrowing, with the former Arsenal youngster nearly losing his life. Givet underwent surgery to correct his heart palpitations and returned to the side but he could do little to stop Rovers dropping into the Championship. The Ewood Park faithful expressed their anger at owners Venky’s and manager Steve Kean throughout the campaign and their worst fears were confirmed after a 1-0 defeat to relegation rivals Wigan in May. Bolton also went down after a decade in the top flight.

Central midfield: Stiliyan Petrov
Aston Villa captain Stiliyan Petrov was sadly diagnosed with leukaemia early in 2012 and began to receive treatment straight away. The Bulgarian struggled with the gruelling chemotherapy sessions but thankfully made a full recovery and later returned to Villa Park in a coaching capacity. On the pitch, Villa had a terrible 2011/12 season, with new manager and former Birmingham boss Alex McLeish proving to be an unpopular choice. The side stayed narrowly avoided relegation, despite not winning any of their last ten games.

Central midfield: Joe Allen
2011 came to end with football still in shock over the tragic death of Wales manager and Premier League legend Gary Speed. Swansea’s match with Aston Villa went ahead after news of his death broke, with several members of Speed’s Welsh team appearing in the game. Swans midfielder Joe Allen had lined up for Speed whilst on national team duty and impressed throughout the team’s debut season in the Premier League. Club manager Brendan Rodgers also received praise for his work and departed for Liverpool at the end of the season, taking Allen with him to Anfield.

Central midfield: Steven Gerrard
Following the controversy surrounding John Terry, Steven Gerrard captained England at Euro 2012. The Three Lions lost out on penalties against Italy in the quarter-finals, despite Gerrard successfully converting his spot-kick in the shoot-out. The Merseyside-born midfielder didn’t fare so well in the League Cup final, seeing his penalty superbly saved by Tom Heaton after the game had ended 2-2. Luckily for Gerrard, his own cousin missed a decisive kick for the Bluebirds later in the shoot-out, meaning Liverpool won the match.

Striker: Didier Drogba
Despite getting his hands on the League Cup trophy, Steven Gerrard missed out on lifting the FA Cup after Didier Drogba bagged the winner for Chelsea against Liverpool in a 2-1 win for the Blues at Wembley. The Ivorian striker yet again proved himself to be the man for the big occasions after scoring against Bayern Munich in the Champions League Final. Chelsea’s rollercoaster ride to the European showpiece saw them miraculously overcome Napoli and Barcelona in the knockout rounds, before meeting the German giants. Drogba’s equalising goal sent the match into extra-time and penalties were required to decide a champion. No prizes for guessing who scored the winning spot-kick.

Eight years ago on this very day Chelsea became the ONLY London club to win the Champions League. Did Chelsea get lucky at times? 100%. But Cech’s heroics & Drogba’s last minute header will never be forgotten

May 19th 2012 is when London truly became blue.. pic.twitter.com/uj73WGTMhV

Striker: Robin van Persie
Chelsea became the first London club to lift the Champions League trophy after their victory in Germany, leaving Arsenal fans with plenty to be upset about in the 2011/12 season. A humiliating 8-2 defeat to Manchester United early on in the campaign led to questions over Arsene Wenger’s future as boss, with matters made worse after dramatic losses against Blackburn Rovers and local rivals Tottenham. Robin van Persie’s form kept the Gunners in contention though, with the Dutchman finishing as the Premier League’s top scorer and bagging the PFA and FWA Player of the Year awards for his outstanding form. However, he wasn’t going to be a hero at the Emirates for much longer.

Striker: Sergio Aguero
No-one needs reminding of why this man made the headlines in 2011/12, right?