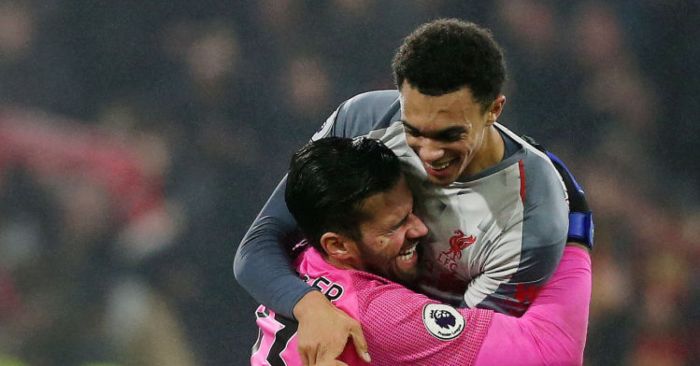 If you’re missing football and if no-one else can help, maybe you should look at the Premier League XI A-Team…

Goalkeeper: Alisson
A Liverpool soldier who cost a fortune in 2018, Alisson has already proved to be worth every penny. The improvement of the side’s backline has been glaringly obvious since the Brazilian goalkeeper and Virgil van Dijk arrived at Anfield, although some seem to think the Dutchman’s high standards have dropped. Liverpool have form for ‘A’ goalkeepers, with their current back-up Adrian and former back-up Pegguy Arphexad (who was rumoured to be more x-rated than A-team, with the Frenchman having to deny gossip about a post-football career in porn) joining Alisson in the ranks. Today’s goalkeeping challenge is attempting to name the other eleven Premier League keepers eligible for A-Team selection.

Right-back: Trent Alexander-Arnold
Merseyside’s finest right-back is an easy choice for the same position in the A-Team. He’ll feel right at home here, too; this side will of course be playing at Anfield. Alexander-Arnold gained personal recognition with selection in last season’s Premier League PFA Team of the Year and for him it’s been that way since 18, winning Liverpool’s Young Player Of The Year in the 2016/17 and 2017/18 campaigns. Competition for the right-back slot comes from Viv Anderson, who won the European Cup 40 years before Alexander-Arnold did. Anderson had a fine career at Nottingham Forest, Arsenal and Manchester United, but was in his late-thirties come the advent of the Premier League.

Centre-back: Tony Adams
He may have had to settle for a place on the bench in the Greater London side but Tony Adams gets the captain’s armband for the A-Team. The one-club man won four top-flight titles with Arsenal in three separate decades and scored a title-clinching goal in 1998, securing the Gunners their first Premier League title. Despite his on-pitch success, under no circumstance is Adams allowed to player-manage the A-Team.

Centre-back: Toby Alderweireld
Belgian defender Alderweired gets the other centre-back spot in the A-Team, having been one of the Premier League’s best defenders over the past six seasons. There are some solid back-up options for the side: Bournemouth’s Nathan Ake, Newcastle entertainer Philippe Albert, former Brazil international Alex and Danish legend Daniel Agger.

Left-back: Cesar Azpilicueta
Azpilicueta gets the left-back spot in the team, unless he goes Brazil style with his ‘Dave’ nickname (send in your best nicknames XI) and transfers to the D-Team. Able to play anywhere across the back line, the Spaniard has been used in back threes, fours and fives whilst at Stamford Bridge, winning two titles under two different managers in eight seasons. Azpilicueta’s Chelsea team-mate Marcos Alonso would come in handy if the A-Team manager Carlo Ancelotti started using wing-backs. Ancelotti would of course be joined in the dugout by assistant Sam Allardicio.

Right central midfield: Darren Anderton
A player who certainly wouldn’t want his nickname on the back of his shirt, Anderton’s “sicknote” reputation was slightly exaggerated. The former Tottenham player managed 319 Premier League appearances in his career and won 30 England caps. He would have featured far more for his country, too, if wasn’t for the emergence of former Spurs youth player David Beckham. Anderton did come close to immortality in an England shirt, hitting the post in extra-time against Germany in Euro 1996, when a goal would have seen the Three Lions through to the final.

Defensive midfield: Xabi Alonso
The face of the A-Team, Xabi Alonso would be playing A-grade passes and scoring A-grade goals for the side, even though his shooting practice might drive his team-mates mad. A World Cup winner and two-time European champion with Spain, Alonso also enjoyed success at club level, winning the Champions League in 2005. He scored the equalising goal for Liverpool in the final to make it 3-3, after his side had been 3-0 down because of Steven Gerrard at half-time. Alonso left Anfield for Real Madrid in 2009 (it’s hard to imagine him begging to join Arsenal), his departure linked to speculation surrounding Rafa Benitez’s desire to replace him with Gareth Barry. Benitez may finally satisfy a lifelong ambition if he gets the B-Team manager’s job and Barry is selected.

Left central midfield: Mikel Arteta
Though perhaps not on the same level as Alonso, Arteta played almost twice as many Premier League games as his compatriot, starring for Everton and Arsenal. There would almost certainly be some arguments between Arteta and Alonso over set-piece duties, with the former having scored some fine free-kicks as well as proving to be a reliable penalty taker over the years. Everton finished fourth in Arteta’s debut season at the club, ahead of Alonso’s Champions League-winning Liverpool and the Toffees continued to push for a top-four place during his time there. But Arteta never won a major trophy at Goodison Park, leaving the club in 2011 to sign for FA Cup specialist Arsene Wenger at Arsenal. He subsequently captained the Gunners to victory in the 2014 final.

Attacking midfield: Dele Alli
Alli’s only just turned 24; hopefully for Tottenham and England fans there is much more to come from a player who has already won 37 international caps. Some famous midfielders will have to be content with a place on the A-Team bench: Andrey Arshavin, Swedish hero Niclas Alexandersson, the Welsh Xavi Joe Allen, Michail Antonio and Marc Albrighton. Crazy fool Marko Arnautovic will have to stay off the A-Team plane as he’s just too disruptive.

Striker: Sergio Aguero
Now nearing the end of an incredible spell at Manchester City, Aguero’s name will forever be associated with the most famous Premier League title-clinching goal of them all in 2012. Scoring right at the death against QPR to beat bitter rivals Manchester United to the title by one point, it seemed like a perfect plan had come together for City. Harry Kane has been tipped to take over from the Argentine at the Etihad; if he wants to leave his hometown club to win trophies, there may be no better place. City’s greatest ever goalscorer, Aguero has won four Premier League titles at the club and probably doesn’t have enough shelf space to hold all of his League Cup medals.

Striker: Pierre Emerick Aubameyang
It’s not Iago Aspas but Pierre-Emerick Aubameyang who gets the other striker spot in the A-Team – tough call, though. Aubameyang and Aguero seem like a dream partnership up front, although Nicolas Anelka could easily slot into the side, too. Other A-Team forwards include Tammy Abraham, Emmanuel Adebayor, Juan Pablo Angel, Clive Allen, Dalian Atkinson and howling mad Faustino Asprilla.