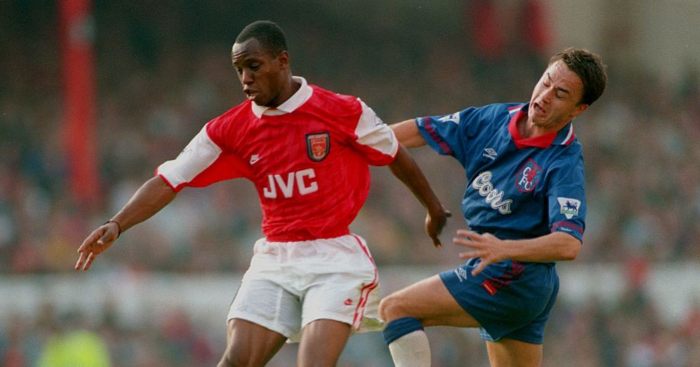 We’re approaching the end of the Alphabet League sides; here’s the W-Team…

Goalkeeper: Chris Woods
England’s seventh most-capped goalkeeper of all time takes the number one spot in the W-Team, with Chris Woods seeing off competition from a host of other W ‘keepers. He played for Sheffield Wednesday in the inaugural Premier League season and helped the Owls reach both domestic cup finals in 1993. Woods was on the losing side in both matches but he did pick up two League Cup winners’ medals earlier in his career, as a teenager at Nottingham Forest and then in 1985 with Norwich City. If you fancy a goalkeeper challenge, try naming three ‘keepers eligible for the W-Team who played for Everton.

Right-back: Kyle Walker
Some good competition at right-back but Manchester City’s Kyle Walker gets the starting spot ahead of Manchester United’s Aaron Wan-Bissaka. The Yorkshire-born defender may not take part in Gareth Southgate-approved pastimes but he’s been delivering the goods on the pitch in the Premier League for a decade now. After years of racing down the right flank in north London with Spurs, Walker’s move to Manchester City in 2017 made him a Premier League, League Cup and FA Cup winner. Now football has returned, he’ll be hoping to add a Champions League title to his honours list.

Centre-back: Des Walker
You’ll never beat Des Walker. Des joins Kyle as the second Walker in the W-Team defence. Another former Sheffield Wednesday player in the nascent Premier League years, Walker arrived at Hillsborough after a season-long spell at Sampdoria. He had been a dominant figure in Brian Clough’s back line at Nottingham Forest during the late eighties and although his England career ended on a sour note, he was badly missed at the City Ground, with Forest suffering relegation from the top flight following his departure.

Left-back: Nigel Winterburn
Completing an all-English backline, Nigel Winterburn starts at left-back for the W-Team. The golden oldie won three top-flight titles with Arsenal, forming part of a famous defence under George Graham. Winterburn stayed at Highbury until the turn of the century and retired with 352 Premier League appearances to his name. Other left-back options include Stephen Ward, Clive Wilson and Nigel Worthington, whilst promising Manchester United youngster Brandon Williams could feature in a future Alphabet League campaign.

Central midfield: Dennis Wise
A key figure at Chelsea for over a decade, Dennis Wise captained the Blues to victory in the 1997 and 2000 FA Cup finals. The combative midfielder picked up five red cards and 70 yellows in the Premier League, with his assertive and aggressive style often irking opposition players. Luckily for Wise, Arsene Wenger will manage the W-Team, so any on-pitch misdemeanours in the Alphabet League will conveniently go unnoticed.

Central midfield: Georginio Wijnaldum
A soon-to-be Premier League title winner, Liverpool’s Georginio Wijnaldum makes the W-Team’s first XI. Two old Anfield favourites take spots on the bench, with Ronnie Whelan and John Wark both veterans come the advent of the Premier League. The late, great Ray Wilkins was also in the twilight years of his playing career in 1992, with the former Manchester United and Chelsea star still turning out for QPR as he fast approached 40.

Central midfield: Jack Wilshere
James Ward-Prowse misses out on W-Team selection despite amassing 43 more Premier League appearances than Jack Wilshere. The West Ham midfielder has only just about reached double figures for the club but his early promise at Arsenal gets him a spot in this side. Other players eligible for the team include Victor Wanyama, Glenn Whelan, Harry Winks and Ryan Giggs’ biggest fan, Curtis Woodhouse.

Wing-forward: Willian
Chelsea winger Willian starts on the wing but faces competition from Theo Walcott and Shaun Wright-Phillips for a spot in the W-Team’s first XI. The Brazilian has won two Premier League titles during his seven-year stay in England, whilst Wright-Phillips won the competition once during his stay at Stamford Bridge, playing under Jose Mourinho. Of course, Walcott’s career has passed by without a league title win but he does at least have a huge collection of top-four trophies to look back on.

Wing-forward: Chris Waddle
Sylvain Wiltord and Jason Wilcox have won the Premier League title but miss out on selection thanks to the marvellous mulleted talent of Geordie-born Chris Waddle. England fans may have got a feeling of disappointment when the skilled winger blazed a penalty into orbit at the 1990 World Cup but Waddle’s ability makes him the diamond light of Wenger’s W-Team. He won the FWA Footballer of the Year award in the 1992/93 season, with his fine form for Sheffield Wednesday helping them to a seventh-place finish.

Wow What a signing ! Back in July 1992 – A warm Wednesday welcome to Chris Waddle. How many £ millions today? #SWFC pic.twitter.com/xcRXdeyNxa

Striker: Ian Wright
Arsenal hero Ian Wright starts up front, although he may not too happy about playing at White Hart Lane: the W-Team’s home stadium. The London-born striker keeps a former Ballon d’Or winner out of the side, with George Weah winning the prestigious award in 1995. The current President of Liberia was 33 by the time he arrived in the Premier League but did manage to win the FA Cup during his short stay in England and he’ll surely want to take up a spot on the bench at White Hart Lane rather than running an actual country. Rod Wallace, Chris Wood, Callum Wilson and Danny Welbeck (nine more England caps than Wright) provide further back-up.