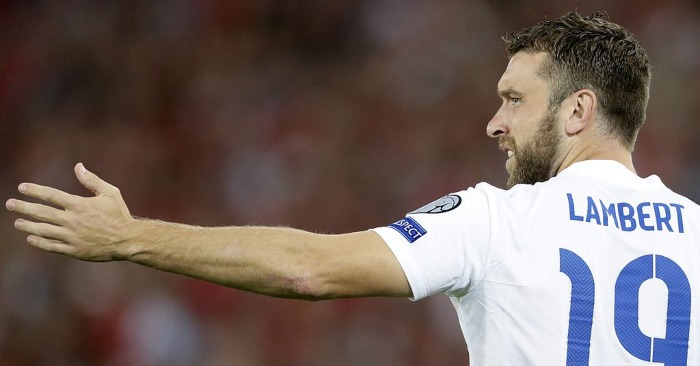 England were meant to be playing a friendly against Denmark today, as it turns out we’ll have to wait a while before seeing some international football…but not as long as these guys…

Goalkeeper: Tom Heaton
Aged 30 on his England debut four years ago, the currently injured Heaton will be hoping to return to the England fold in time for Euro 2021 (though the emergence of Dean Henderson and Aaron Ramsdale makes that unlikely). Heaton is no stranger to making late debuts, having made his first Premier League appearance at the age of 28 for Burnley. Despite being on the books at Manchester United early in his career, he never made a top-flight appearance there, forging a reputation in the lower leagues at Cardiff City and Bristol City before moving to Turf Moor.

Right back: Barry Venison
Venison must have thought his hunt for England honours had long passed him by whilst he was playing for newly promoted Newcastle United in the 1993/94 season. The former Sunderland player had his most successful club spell at Liverpool in the late eighties and early nineties, but was brought into the international fold after a season in which the Magpies finished third in the Premier League. Aged 30 on his England debut, Venison won another cap a year later in March 1995. Two clean sheets, by the way.

Barry Venison ( @BarryVenison ) made his England debut against USA in September 1994. pic.twitter.com/QN4xmfNwVI

Centre-half: Steve Bould
Although he was a member of Arsenal’s miserly defensive back line alongside Premier League Golden Oldie Nigel Winterburn, Steve Bould wasn’t given an international opportunity until he was 31 years old. Despite being the oldest player of the famous five defence, he was the last of them to get the England call. Bould won more league titles than he did England caps. His two international appearances in 1994 came in two friendlies, including a 5-0 win over Greece. He was called up to another squad the following year but did not play and missed out on a call-up for Euro 1996.

Centre-half: John Scales
He may have missed out on making the Premier League Yorkshire XI, but he makes the England Late Debutants XI as the only member of the side who won his first cap under 30. Scales was playing for Liverpool come his England debut, but he was part of the Wimbledon side that famously defeated the Reds in the 1988 FA Cup final. Born in July 1966, a fairly low-key month in English football history, Scales made all three of his England appearances in 1995. All of those games were part of the Umbro Cup, a warm-up competition devised to help England prepare for Euro 96 the following year.

My new favourite thing is watching YouTube vids of the England friendlies 1994-96 as we were warming up for Euro 96. They were awful. Bet you don’t remember Colin Cooper, John Scales & Kevin Richardson playing for England

Left-back: Chris Powell
In the early nineties, Chris Powell was turning out for Southend United. In the early noughties, he was making his debut for England in a 3-0 win against Spain. Aged 31 on his international debut in 2001, Powell was playing his club football for Charlton Athletic at the time, the newly promoted side finishing an impressive ninth in their first Premier League season. He won four more caps in the space of a year, missing out on the 2002 World Cup squad to the younger duo of Ashley Cole and Wayne Bridge.

Right wing: Leon Osman
Osman already had ten years of Premier League experience for Everton behind him by the time he made his England debut at the age of 31. The Wigan native must have felt his international chances were slim in the noughties, with England’s golden generation firmly in play But Osman’s impressive form under David Moyes in 2012 led to a shock call-up to face Sweden in a friendly. Of course, Zlatan Ibrahimovic wasn’t going to let someone else steal the headlines that day; the Swede scored four times in the match, including an outrageous overhead kick from 25 yards out.

Seasonal reminder that Leon Osman received his first senior England cap aged 31, but it was during Movember, so every picture of him in the shirt has him looking like an inter-war spiv. pic.twitter.com/lJlGBAluEr

Central midfield: Kevin Richardson
Richardson made his first and only international appearance at 31 years of age in 1994, alongside fellow old debutant Steve Bould. An England cap seemed justified for a player who was part of league title-winning teams at Everton and Arsenal in the eighties. Just before his England call-up, Richardson had captained Aston Villa to a League Cup win over Premier League champions Manchester United in a man-of-the-match performance.

Central midfield: Tim Sherwood
A year after Zinedine Zidane had inspired France to World Cup glory, Tim Sherwood made his victorious England debut at the age of 30. Jack Walker was right all along.

Left wing: Steve Guppy
Lee Sharpe’s unfulfilled potential meant England managers had a headache when trying to find a left-wing solution in the nineties. Despite showing good form for Leicester City in the Premier League, many felt Steve Guppy would be a fish out of water when thrust into the international scene in 1999. Aged 30 at the time, Guppy made his first and only England appearance against Belgium. He went on to win the League Cup with the Foxes in 2000, but missed out on the European Championship squad that summer.

Frank Lampard made his international debut in Steve Guppy’s only appearance for England. There’s your actual Golden Generation.

Striker: Kevin Davies
Davies must have been bowled over in 2010 when he became the oldest player to make his England debut since Leslie Compton in 1950. Aged 33 at the time, Davies had been battling defenders in the Premier League for years as the toughened spearhead of the Bolton Wanderers attack. Even though he only appeared once for his country, it marked an impressive turn-around in fortunes for Davies. It looked as though the Sheffield native was finished at the top level after his failed big-money move to Blackburn Rovers in 1998, yet he ended his career as a full international with 88 Premier League goals to his name.

Striker: Rickie Lambert
In 2013, Southampton player Rickie Lambert made his England debut against Scotland, scoring in a 3-2 win. A year later, Lambert made his 11th and last England appearance, also versus Scotland. By that time he was a Liverpool player, having secured a move to the club he had always supported in the summer of 2014. A first England cap at 31, a move to his dream club at 32. Although it didn’t quite work out for Lambert at Anfield, it is still an amazing story.