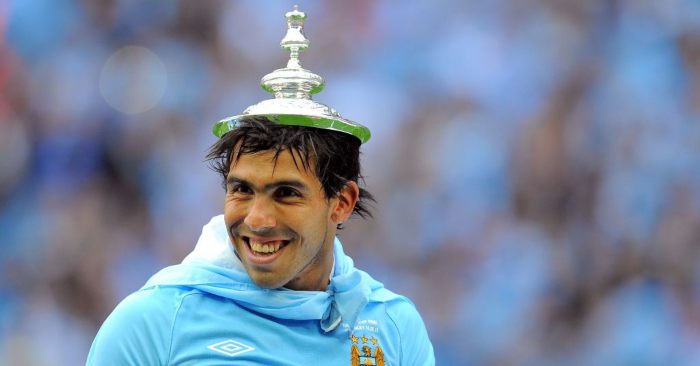 Italian football returns this week, with the Coppa Italia clash between Juventus and AC Milan. To mark the occasion, here’s an XI made up from players who won the FA Cup and Coppa Italia…

Goalkeeper: Pepe Reina
The 2006 FA Cup final is largely remembered for Steven Gerrard’s heroics but Liverpool goalkeeper Pepe Reina played a huge part in the Merseyside club’s win. With the game going to penalties after a 3-3 draw, the Spaniard saved three out of four West Ham spot-kicks in the shoot-out, with golden oldie Teddy Sheringham the only player to score past Reina. Eight years later, Reina helped Napoli to a 3-1 win over Fiorentina in the 2014 Coppa Italia final.

Centre-back: Jaap Stam
A key figure in Manchester United’s treble-winning season, Jaap Stam lifted the FA Cup in 1999. The Dutch defender only came on as late substitute in the Red Devils’ win over Newcastle United at Wembley but started in the Champions League final four days later. In 2004, Stam played in the two-legged Coppa Italia Final as part of a victorious Lazio side. Stefano Fiore scored three times against Juventus in a 4-2 aggregate win for the Biancocelesti.

Centre-back: Ruud Gullit
The 1987 Ballon d’Or winner will have to take up a position at the back for this team, having played in the ‘Libero’ role for Chelsea upon his arrival in England. Gullit was player-manager of the Blues by the time of the 1997 FA Cup final, although he didn’t start himself at Wembley in the side’s 2-0 win over Middlesbrough. The Dutch legend had lifted the Coppa Italia trophy with Sampdoria three years before his triumph in England, with the Blucerchiati beating Serie B side Ancona 6-1.

Centre-back: Aleksandar Kolarov
In 2009, Aleksandar Kolarov helped Lazio to their third Coppa Italia win of the noughties, with the Serbian converting a penalty in his side’s shoot-out victory against Sampdoria after the final had finished 1-1. Two years later, he was part of an FA Cup-winning Manchester City side, the club’s first major trophy in 35 years.

Right wing: Mario Balotelli
Super Mario will have to play on the wing for this side, with the controversial Italian winning the FA Cup one year after he won the Coppa Italia. Balotelli played alongside Kolarov in Manchester City’s 2011 win but he was part of a record-breaking Inter Milan team the previous year. Jose Mourinho led the Nerazzurri to the treble in the 2009/10 season as Inter became the first Italian side to achieve the feat.

Central midfield: Didier Deschamps
The 1998 World Cup-winning captain only spent one season in England but still managed to come away with some silverware. Deschamps was part of Chelsea’s victorious side in the 2000 FA Cup final, the last to be held at the old Wembley Stadium. The Frenchman was no stranger to success in cup competitions, having played a key role in Juventus’ 1995 Coppa Italia win over Parma.

Central midfield: David Platt
One year before Deschamps’ arrival in Turin, David Platt left the Old Lady to play alongside old man Pietro Vierchowod at Sampdoria. The veteran defender captained the side and scored in their 6-1 win over Ancona in the 1994 Coppa Italia final. One year after his Italian accomplishment, Manchester-born Platt returned to England and came on as a substitute in Arsenal’s 2-0 triumph over Newcastle United in the 1998 FA Cup final.

Left wing: Sulley Muntari
Ghanaian international Muntari won the FA Cup final with Portsmouth in 2008, a couple of months before switching Fratton Park for the San Siro. He won the Serie A title with Inter Milan in his first season at the club, before coming on as a substitute in the finals of the Champions League and Coppa Italia in 2010. Argentinean striker Diego Milito scored the all-important goals that won both cup competitions for Inter as they completed the treble.

Forward: Carlos Tevez
The third member of Manchester City’s FA Cup-winning side of 2011 to feature in this team. Carlos Tevez left England in 2013 having helped both Manchester United and City to Premier League title wins, as well as starring in the Red Devils’ 2008 Champions League triumph. The controversial Argentinean wasn’t finished in his pursuit of major trophies though and lifted the Coppa Italia with Juventus after a 2-1 win over Lazio in the final of 2015.

Striker: Alvaro Morata
Spanish striker Alvaro Morata may not have a future at Stamford Bridge but he does have a FA Cup medal to show for his time at Chelsea, after coming on as a late substitute in the side’s 1-0 win over Manchester United in 2018. He didn’t make much of an impact at Wembley but he did manage to send Juventus fans into a frenzy in the 2016 Coppa Italia final against AC Milan. Morata turned in Juan Cuadrado’s cross in extra-time to win the cup, just two minutes after coming on a substitute.

On this day in 2016 Juventus won their 11th Coppa Italia after defeating Milan 0-1 with Morata scoring the winner!! pic.twitter.com/Oi9dGkYGR6

Striker: Gianluca Vialli
A four-time Coppa Italia winner, Gianluca Vialli added the FA Cup to his honours list in 1997. The Italian international came on a late replacement for fellow countryman Gianfranco Zola in Chelsea’s 2-0 win over Middlesbrough at Wembley, having arrived at Stamford Bridge in 1996 following a fruitful spell at Juventus. Vialli captained the Bianconeri to a Coppa Italia win in 1995 but he was even more successful in the competition with Sampdoria. He scored in the 1985, 1988 and 1989 finals, with the Genoa-based club winning the title on each occasion.