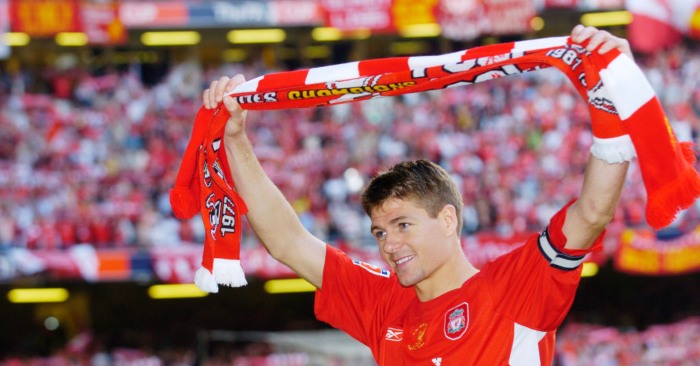 14 years ago to the day, Steven Gerrard lifted the FA Cup after putting in a heroic performance in the final. Here’s an XI of cup-winning captains who inspired their sides to victory…

Goalkeeper: David Seaman
Legendary Arsenal goalkeeper David Seaman left Highbury at the end of the 2002/03 season after 13 successful years at the club. The Yorkshire-born ‘keeper had the perfect farewell, captaining the side in the 2003 FA Cup final against Southampton. Seaman kept a clean sheet, with a first-half Robert Pires goal enough to win the match, giving the veteran goalkeeper a perfect moment at the Millennium Stadium.

Right wing-back: Emmerson Boyce
Wigan Athletic defender Emmerson Boyce held off Manchester City’s Argentine attacking threat in the 2013 FA Cup final, with Sergio Aguero and Carlos Tevez failing to breach Wigan’s back line. Tevez had captained City to FA Cup victory in 2011 but it was Boyce’s turn to lift the famous trophy as skipper two years later as substitute Ben Watson scored a dramatic late goal to cause one of the FA Cup’s greatest upsets.

Centre-back: Tony Adams
Adams captained Arsenal to victory in the 1993 FA Cup final, the last one to go to a replay and the first of the Premier League era. Adams’ fellow Londoner Ian Wright scored in the original match and the replay, with an extra-time goal from Andy Linighan enough to see off Sheffield Wednesday in a 2-1 victory. Adams went on to captain the Gunners to a famous Premier League and FA Cup double in 1998 and did the same thing in 2002, ending his career on an incredible high.

Centre-back: Dave Watson
The 1995 FA Cup final featured Everton up against a much-fancied Manchester United side. Toffees’ captain Dave Watson and his defence had to be on top of their game to hold off the Red Devils’ attacking threat. The Merseyside-born centre-back put in a man-of-the-match performance as Everton ran out 1-0 winners and gave their fans something to celebrate after three difficult Premier League seasons.

Centre-back: John Terry
Terry captained Chelsea to an incredible four FA Cup wins, with the first coming in 2007 as the Blues held off Manchester United in the first final at the new Wembley Stadium. Chelsea beat Everton two years later and retained the trophy the following season with Terry and his defence keeping a clean sheet in the 2010 final against Portsmouth. He lifted the trophy for the final time as captain in 2012, becoming the most successful FA Cup ‘skipper of the Premier League era.

#OnThisDay 5th May 2012 #ChelseaFC won their 7th FA Cup and for these three it was their 4th, in 6 seasons. John Terry was 1st to captain 4 #FACup wins, @didierdrogba was 1st to score in 4. #Legends All#CFC #Chelsea pic.twitter.com/OkUhwPXa9s

Left wing-back: Dennis Wise
Chelsea’s 1997 FA Cup win was the club’s first since 1970, with Dennis Wise joining Ron Harris in the history books as he captained the side to victory. Three years later, Wise was man-of-the-match in the last FA Cup final to be held at the old Wembley Stadium. Chelsea beat Aston Villa 1-0 in a tight game, with Wise the only Englishman in Gianluca Vialli’s first XI.

Central midfield: Patrick Vieira
The 2005 final was another close game, as Manchester United and Arsenal both failed to score in normal and extra-time. The Red Devils felt they had the better chances in the match but would have to try their luck in a penalty shoot-out. Manchester-born Paul Scholes saw his effort saved by Jens Lehmann, resulting in Gunners’ captain Patrick Vieira netting the winning penalty for his side as they scored all five of their spot-kicks.

Central midfield: Roy Keane
Irish immortal Roy Keane was on the losing side in 2005 but he knew how Vieira felt after lifting the trophy as captain the previous year. Keane had missed most of the 1999 FA Cup final after suffering an injury early on in the match, with his replacement Teddy Sheringham putting in a fantastic performance as United beat Newcastle United 2-0. However, in 2004 Keane played the whole match and led the Red Devils to victory as they brushed aside Millwall 3-0.

Attacking midfield: Steven Gerrard
Perhaps the greatest FA Cup captain’s performance of them all, Steven Gerrard’s heroics in 2006 helped Liverpool win a trophy that seemed destined for West Ham’s cabinet. His stunning strike in added time tied the score at 3-3, the second time he had dragged Liverpool back into the game after equalising early on in the second half. Gerrard capped his performance with a perfectly struck penalty in the shoot-out as Liverpool triumphed in Wales.

On this day in 2006, Steven Gerrard scored twice as #LFC beat West Ham in the FA Cup final in Cardiff pic.twitter.com/bJsTS2tV2H

Striker: Eric Cantona
Cantona lit up a dour 1996 final with his fantastic strike late in the game just about overshadowing the garish cream suits worn by the Liverpool players before kick-off. The Frenchman was the first of his countryman to win a Premier League title and became the first non-British or Irish captain of an FA Cup-winning side as Manchester United won the competition for the third time in seven seasons.

Striker: Wayne Rooney
Captain of Manchester United in the 2016 FA Cup final, Wayne Rooney had been a headline act since his breakthrough in the 2002/03 season, becoming one of England’s youngest debutants in the same campaign. His successful career included Premier League titles, League Cup titles and a Champions League title but the FA Cup had eluded him. United’s 2-1 win against Crystal Palace changed that, as Rooney put in a man-of-the-match performance for the Red Devils, inspiring his side to victory after they had fallen behind.