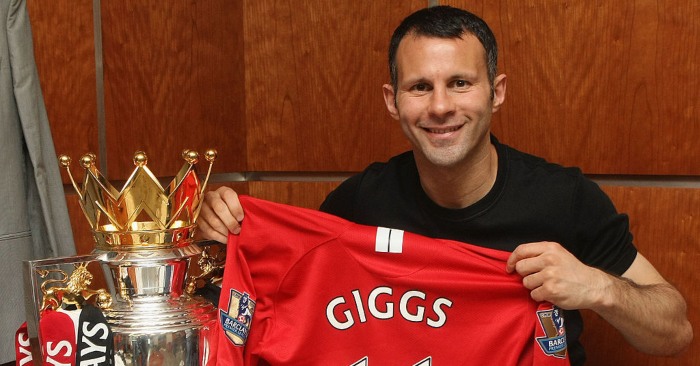 Goalkeeper: Edwin van der Sar
Manchester United’s experienced goalkeeper broke a Premier League record during the campaign, with an impressive 14-game streak without conceding a goal. Newcastle United’s Peter Lovenkrands ended the run, scoring past the Dutchman in the March of ‘09, with the golden oldie last conceding in the November of ’08. In total he had kept a clean sheet for over 21 hours.

Right-back: Michael Essien
Chelsea’s Michael Essien scored in his side’s Champions League semi-final tie against Barcelona in 2009. It remained the only goal of the match until Andres Iniesta netted in injury-time to send the Spanish team through on away goals. The game was overshadowed by referee Tom Henning Ovrebo’s performance, with the Norwegian official turning down four penalty appeals from Chelsea.

Centre-back: Nemanja Vidic
Manchester United centre-back Nemanja Vidic won the Premier League Player of the Season award as he helped his side to the lowest ‘goals against’ tally in the 2008/09 season. However, the Serbian defender found a nemesis in Fernando Torres, with the Spaniard running Vidic ragged as Liverpool thrashed the Red Devils 4-1 at Old Trafford. Vidic was sent off in both matches against the Merseyside club during the campaign.

Torres bullying Vidic. Anything but this is wrong. https://t.co/a4aJhpar0q pic.twitter.com/4OVgh8oxlC

Centre-back: Ledley King
Spurs captain Ledley King only managed four league appearances in the 2007/08 season due to injury but was available come the start of the following campaign. Tottenham boss Juande Ramos only used King in two Premier League matches at the start of the season, as the north London club picked up just two points from their first eight games. Harry Redknapp took over as manager and soon guided the side out of relegation trouble, with King playing an integral part. The undercapped England international captained the side to the 2009 League Cup final but only took home a runners-up medal after his side lost on penalties to Manchester United.

Left-back: James Milner
The ever-useful James Milner departed Newcastle United for Aston Villa at the start of the 2008/09 season, prompting manager Kevin Keegan to question his position at St. James’ Park. Keegan reportedly expected German superstar Bastian Schweinsteiger to arrive as Milner’s replacement and ended up resigning after conflict with owner Mike Ashley. Newcastle’s season went terribly from that point on, with Geordie legend Alan Shearer drafted in as manager during the April of ’09 to help the side fight off relegation. Milner’s new side defeated Newcastle on the last day of the season, with the Magpies slipping into the second tier as a result.

Right wing: Theo Walcott
Arsenal winger Theo Walcott hit made the headlines in the 2008/09 season, scoring a marvellous hat-trick for England against Croatia in a World Cup qualifying match. Walcott, already the Three Lions’ youngest ever player, broke another record with his incredible performance, becoming the nation’s youngest man to bag a hat-trick. England ended Croatia’s proud record of 35 home qualifiers without defeat and exorcised the demons of their infamous 3-2 loss to the Croatians that saw them fail to qualify for Euro 2008.

Central midfield: Rory Delap
Stoke City ruffled some feathers in their maiden Premier League campaign, with the Potters returning to the top flight for the first time in since 1985. Rory Delap made the headlines, with his long throw-ins causing mayhem for defences up and the country. Stoke managed to beat Arsenal in the November of ’08, with both the side’s goals in a 2-1 win coming as result of Delap’s throws.

Central midfield: Steven Gerrard
Liverpool’s inspirational captain scored an impressive 16 league goals as he led his side to second place in the table. The Merseyside-born midfielder won the 2008/09 FWA Player of the Year award as the Reds finished just four points behind champions Manchester United. Liverpool were seven points ahead of United in January, with manager Rafa Benitez’s ‘facts’ rant against Red Devils boss Alex Ferguson making the headlines.

Attacking midfield: Andrey Arshavin
Liverpool won ten out of 11 games from the March of ’09 until the end of the campaign, with the one anomaly coming in a game of the season contender against Arsenal. January signing Andrey Arshavin made the headlines by scoring all four goals for the Gunners in their 4-4 draw with the Merseyside club. Yossi Benayoun bagged an equaliser for Liverpool late on, after Walcott swept forward to tee-up Arshavin for his and Arsenal’s fourth. The Russian’s performance helped him win the Premier League Player of the Month award for April, with Arsenal going on to finish in fourth. Naturally.

Left wing: Ryan Giggs
Manchester United’s veteran midfielder Ryan Giggs won the PFA Player of the Year in 2009 (much to Curtis Woodhouse’s fury presumably) for his performances throughout the season. United’s famous number 11 won his 11th Premier League title at the end of the campaign, with the Welsh wonder adding to his trophy haul on his way to becoming the most decorated British footballer of all-time.

Striker: Robinho
Manchester City started their journey to assembling the world’s most expensive squad in 2008, with wealthy owner Mansour bin Zayed Al Nahyan taking control of the club. City spent heavily straight away, bringing in future legends Vincent Kompany and Pablo Zabaleta. However, the signing of Brazilian star Robinho from Spanish giants Real Madrid made the most headlines, with the Citizens reportedly beating Chelsea to the striker in a show of financial strength. Robinho finished as top scorer for City but the club finished in a disappointing tenth place.