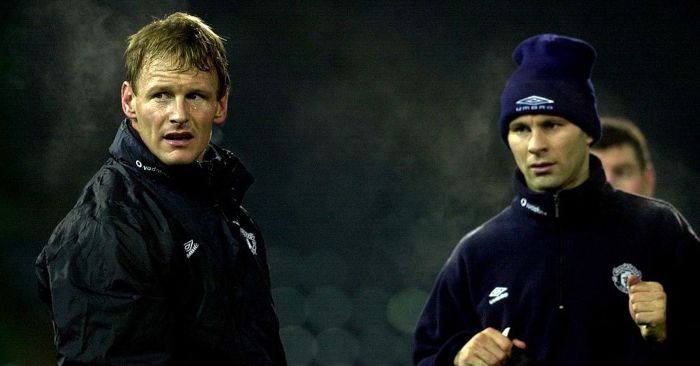 Goalkeeper: Edwin van der Sar
John Burridge may have the record for the oldest ever Premier League player, but of all the goalkeepers who turned out in the competition past their 40th birthday, Van der Sar was surely in the best shape. Born in 1970, the Dutchman won the Premier League and reached the Champions League final with Manchester United in 2011 season. By comparison, while Neville Southall is undoubtedly the finest Welsh goalkeeper in Premier League history, he had certainly seen better (less curvy) days come his final top-flight appearance as a 41 year old for Bradford City in 2000.

Right-back: Denis Irwin
An Irish great and the first of his countrymen to win a Premier League title, Irwin always had the look of an older man but is the young buck in this team, retiring from top-flight football at the tender age of 38.  After a long and successful spell at Manchester United, Irwin’s Premier League career ended on a sour note as a member of the Wolves side that finished bottom of the division in the 2003/04 season.

Centre-half: Richard Gough
A man so old, he actually won a Scottish League title at a club that wasn’t Celtic or Rangers, winning the 1983 championship with Dundee United. The orange-haired defender still had plenty of juice left in him nearly 20 years after The Tangerines had their day in the sun, turning out for Everton in the 2000/01 Premier League season. He made his final appearance for The Toffees at the age of 39.

Centre-half: Stuart Pearce
Fans were still screaming about Psycho as he approached his 40th birthday, playing his last top-flight game for West Ham United at the age of 39 in the 2000/01 season, before having one last hurrah at Manchester City in the second-tier the following campaign. At the age of 38, Pearce won a Premier League Player of the Month award and wore the Three Lions on his shirt for the last time at the age of 37, marking the end of an eventful international career.

Left-back: Nigel Winterburn
A member of Arsenal’s famous five defence, Nigel Winterburn seemed old enough to have been around in Enid Blyton’s days by the time he’d made his last top-flight appearance in 2003. Winterburn had a wonderful time in north London that saw him collect a treasure island’s worth of trophies, including a Premier League and FA Cup double in the 1997/98 season. Unfortunate to only win two England caps, Winterburn often found himself behind fellow old man team member Pearce in the national team pecking order.

Right wing: Gordon Strachan
One of the Premier League’s Flowers of Scotland, many thought Strachan’s top-flight career was over when he left Manchester United and dropped down a division to play for Leeds United in 1989. The Elland Road club soon secured promotion to the top tier, with Strachan included in the PFA Team of the Year in the 1990/91 season, before he captained the club to the final First Division title the following campaign at the age of 35. He was still far from his expiry date, though, nominated as the club’s Player of the Year in the inaugural Premier League season, Strachan then moved onto Coventry City, eventually taking the role of player-manager there in 1996. He made his final appearance at the age of 40.

Central midfield: Bryan Robson
A fantastic player who was incredibly unfortunate with injuries at international tournaments, but Robson’s creaking joints didn’t stop him playing Premier League football until he was 39. Captain Marvel had been Manchester United’s super-man in the eighties and despite winning three FA Cups, the First Division title remained elusive that decade. Robson was 35 come the advent of the Premier League but finally managed to captain the Red Devils to league glory in 1993 and again the following the season. With his game time at Old Trafford diminishing, Robson left for Middlesbrough, becoming player-manager. After guiding his new club to promotion, he played his last top-flight game in the 1996/97 season, a campaign that saw Middlesbrough relegated and losers in both domestic cup finals.

Central midfield: Ray Wilkins
Another seasoned England international who took on a player-manager position in the early years of the Premier League, Ray Wilkins was still turning out in midfield for QPR as he fast approached 40. His last appearance came in the competition came in the 1995/96 season, marking the end of a career at the top that involved spells at Chelsea, Manchester United, AC Milan, PSG and Rangers. A much-loved legend, sorely missed.

Left wing: Ryan Giggs
The current Wales boss rounds off a midfield of former player-managers. The Welsh Wizard certainly kept himself fit on and *ahem* off the pitch, ensuring a playing career that lasted until he was 40. In 2009, at the age of 36, he won the BBC Sports Personality of the Year award and carried on playing until 2014, marking the end of 24 seasons in the Manchester United first team. Giggs retired with a trophy collection unrivalled in the domestic game, finishing with 13 Premier League titles to his name, as well as the record for most assists in the competition.

Striker: Kevin Phillips
Nearly 15 years after he burst onto the Premier League scene with Sunderland in the 1999/00 season, Kevin Phillps was still plying his trade in the division after his 40th birthday. His last season at the top certainly didn’t mirror his maiden campaign, but not many players win the European Golden Shoe and Premier League Player of the Year at the first time of asking. For a man who didn’t make his competition debut until he was 26, ending his career with 263 appearances and 92 goals is a mightily impressive record.

Striker: Teddy Sheringham
A player whose main career highlights all arrived after his 30th birthday. The unforgettable Shearer/Sheringham England strikeforce that destroyed the Netherlands at Euro 96. The treble-winning side at Manchester United that included goals for Sheringham in the FA Cup and Champions League finals. The PFA Player of the Year in the 2000/01 season. The Londoner was even voted West Ham United’s Hammer of the Year in 2005 as he helped the club win promotion back to the top flight at the age of 39. Sheringham continued playing in the Premier League for another two seasons, resulting in his record breaking achievement on Boxing Day 2006 as the competition’s oldest goalscorer at 40 years and 268 days.