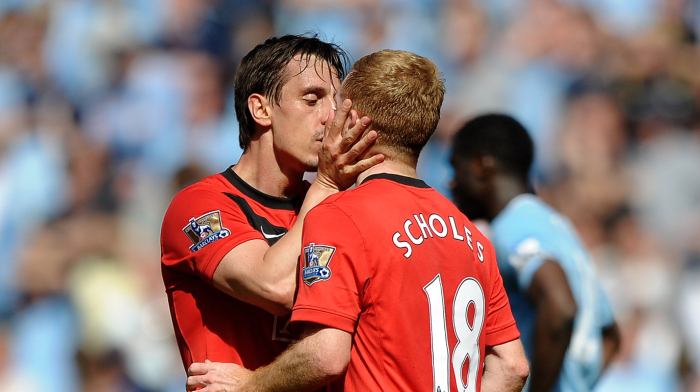 We’ve seen the best of the Geordies, London, Merseyside, the West Midlands and Yorkshire. Here’s the Greater Manchester XI…

Goalkeeper: Dean Kiely
There are a few options for the Greater Manchester No. 1 spot, though no England internationals. Salford-born Irish international goalkeeper Dean Kiely gets the position ahead of Paul Gerrard, Gary Walsh and Andy Goram. Goram had a fantastic career at Rangers, but was past his best by the time Alex Ferguson recruited him as emergency cover for Fabien Barthez and Raimond Van der Gouw.

Kiely was part of the Charlton team that won promotion to the Premier League in 2000 as First Division champions, ahead of Manchester City. He remained with the Addicks as they became established in the division under Alan Curbishley. He went to the 2002 World Cup as back-up to Shay Given and was on the receiving end of Roy Keane’s infamous rage, with the Irish legend suggesting Kiely wasn’t training hard enough.

Right-back: Gary Neville
Greater Manchester has a knack for producing excellent right-backs, with Burnley’s lost talent Lee Dixon and Burnley’s former talent Kieran Trippier losing out to non-Burnley-affiliated Gary Neville. The team could always accommodate Dixon or Trippier by shifting Neville to the centre of defence, where he occasionally featured at club level, once partnering the much-maligned William Prunier there.

The former Manchester United captain is known for having strong opinions off the pitch nowadays, but was just as assertive in his playing days. His overtly determined nature was in perfect harmony with Alex Ferguson’s fearsome will to win and they enjoyed incredible success together at Old Trafford. Shame he ignored his former manager’s advice at Valencia.

Centre-back: Wes Brown
Brown was tipped to become one of England’s finest ever defenders when coming through as the newest member of Fergie’s Fledglings in the late nineties. The hype was understandable at the time as Brown provided excellent cover in defence during United’s treble-winning season whilst still a teenager. Unfortunately, injuries continually hampered his chances at regular runs in the first team; only once did he play over 30 league games in a season.  The 2007/08 campaign wasn’t a bad season to stay fit, with Brown winning his second Champions League title.

Centre-back: Phil Jagielka
Still playing Premier League football at 37, Jagielka has spent his thus-far symmetrical career in Yorkshire and Merseyside. There’s no doubting his defensive talents, even London’s finest Rio Ferdinand and Serbian great Nemanja Vidic had to watch and learn from David Moyes’ Best Of Phil Jagielka video collection. The Scot’s admiration for his defensive lieutenant at Everton was understandable, though, with Jagielka’s winning penalty in the 2009 FA Cup semi-final against childhood heroes Manchester United sending Moyes to his first ever major final.

And this could have been an all-Red back four…

🚨 THIS IS NOT A DRILL

Left-back: Phil Neville
Moyes’ general in the 2009 FA Cup final was Phil Neville. England’s perennial number 50 with 59 caps makes it as Greater Manchester’s left-back. Despite giving away a couple of high-profile penalties in his career (Danish hero Peter Schmeichel saved him in 1999, David Seaman couldn’t in 2000), he was a dedicated and highly professional performer. Able to play anywhere in defence or midfield, at Manchester United he often covered his brother and Ireland’s first Premier League winner Denis Irwin in the full-back positions. After winning six Premier League titles at Old Trafford, he moved to Merseyside in 2005.

Defensive midfield: Nicky Butt
Brazilian legend Pele was impressed by Butt’s ability to rise to the occasion in the 2002 World Cup, mentioning him as one of the best players of the tournament. Not one to shirk a stiff challenge, Butt gave protection to the more flamboyant members of United’s class of 92 side. His finest hour undoubtedly came in the 1999 Champions League final, as he marshalled a midfield missing Roy Keane and Paul Scholes to victory against Bayern Munich. Butt was excellent cover for the high-earning Keane at United and performed superbly in the season before the treble heroics, deservedly securing a spot in the 1997/98 PFA Team Of The Year.

Right wing: David White
A local lad who wore shades of blue in Manchester City’s incredible youth team of ’86, David White became a sensation at Maine Road. He was part of an excellent group of young players coming through at Maine Road in the eighties along with fellow Mancunians Andy Hinchcliffe and the woefully undercapped Paul Lake. White’s blistering pace on the right side of midfield gave full-backs constant headaches and he was rewarded for his club form in 1992 when England manager Graham Taylor called him up for a friendly against Spain. It proved to be his only cap as a move to Leeds United the following year didn’t work out well due to injuries and inconsistent form.

Left wing: Andy Hinchcliffe
The second Manchester City player to feature in this team, Andy Hinchcliffe was a full-back and winger who didn’t cost a penny. Part of City’s famous crop who defeated Manchester United in the 1986 FA Youth Cup final, Hinchliffe was causing them more disappointment nearly a decade later. He was a key member of the Everton side that triumphed over the Red Devils in the 1995 FA Cup final, a trophy that turned out to be his only major honour. At international level, Hinchcliffe was always below golden oldie Stuart Pearce and Graeme Le Saux in the pecking order, winning just seven caps.

Attacking midfield: David Platt
Platt was an England hero in 1990 and 1996…not so much in 1992, but he did have the challenge of Carlton Palmer as a midfield partner in Sweden. Released by Manchester United, he had to work his way up to the top the hard way, making his professional debut for Crewe. Aston Villa saw his top-level potential in 1988 and it wasn’t long before Bobby Robson picked him for international duty. Platt’s knack for late runs and first-time finishes gave England fans something to get excited about.

After playing for Bari, Juventus and Sampdoria in Italy, Platt returned to English football in 1995, signing for Arsenal. His most memorable moment for the Gunners was a winning goal in a 3-2 victory against his former employers Manchester United in 1997. Like Dwight McNeil, he was a special player who United let slip away.

Attacking midfield: Paul Scholes
Platt’s attacking midfield partner is one who definitely didn’t get away from Old Trafford; Paul Scholes spent his entire career there. Greater Manchester might not win the county wars, but they’d certainly score some wonder goals with the ginger maestro (Ginger XI anyone?) and Platt in the same side. Revered by a host of footballing royalty, Scholes was arguably the best English player of his generation. However, the Gerrard/Lampard/Scholes conundrum is one that can’t ever be fully solved and it will forever remain a travesty that England exited an era of such talent with nothing to show.

Striker: Marcus Rashford
Rashford completes the Greater Manchester line-up, making it slightly and predictably Manchester United heavy. United remain proud of their continuous conveyor belt of local lads who make it into first-team squads and Manchester City’s investment in youth development shows they want to do the same thing. City youngster Phil Foden certainly has the ability to force a way into this team…if he can force his way into a regular spot at the Etihad first. Rashford seized his opportunity as a teenager during an injury crisis at United and never looked back. Foden may yet capitalise on David Silva’s impending departure at City before waiting around for injury-enforced opportunities.