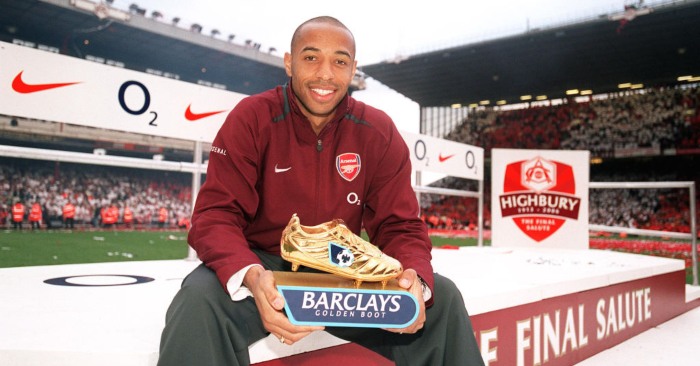 Goalkeeper: Jens Lehmann
German goalkeeper Jens Lehmann had a fantastic season for Arsenal, with his strong performances helping the Gunners to the Champions League final. Lehmann didn’t concede a goal during the European knock-out rounds as Arsenal beat Real Madrid, Juventus and Villarreal for the right to face Barcelona in the final. He kept a clean sheet against the Catalan side too but was only the pitch for 18 minutes, after a challenge on Samuel Eto’o resulted in a red card. Sol Campbell put the ten men ahead later in the first half but Barcelona scored two late goals to win the trophy.

Right-back: Abel Xavier
Middlesbrough defender Abel Xavier became the latest high-profile player in the Premier League to receive a drug-related ban after he tested positive for a performance-enhancing substance following Boro’s European tie against Xanthi. Xavier’s suspension meant he missed out on Middlesbrough’s historic run to the final of the UEFA Cup, with the side knocking out Stuttgart, Roma, Basel and Steaua Bucharest before finishing as runners-up to competition specialists Sevilla.

Centre-back: Michael Dawson
Tottenham Hotspur went into the final league game of the 2005/06 season with a chance of finishing in the top four and qualifying for the Champions League for the first time in the Premier League era. However, they lost 2-1 to West Ham, with fierce rivals Arsenal benefiting and taking the all-important fourth spot. Spurs had attempted to postpone the match following a bout of sickness amongst the players, with a dodgy lasagne apparently at fault. Defender Michael Dawson played in the match despite feeling ill and struggled to keep up with the West Ham attack as Yossi Benayoun fired in the winner for the Hammers.

Michael Dawson and the Lasagne Catastrophe would be an excellent title for a football-themed kids’ book https://t.co/SLCh7lP7IC

Centre-back: John Terry
Chelsea captain John Terry lifted the Premier League trophy at the end of the 2005/06 season, with the Blues confirmed as champions after a 3-0 win over runners-up Manchester United. Terry was nominated for the PFA Player of the Year award, with the London-born centre-back putting in heroic performances as the Blues once again possessed the meanest defence in the country.

Left-back: Patrice Evra
French international Patrice Evra signed for Manchester United in the January of ’06, with the future club legend struggling at first. He made his debut against United’s bitter rivals Manchester City, with the Red Devils losing the game 3-1. Evra was hauled off at half-time and his agent subsequently apologised for the transfer, suggesting the left-back wouldn’t be able to make the grade at Old Trafford. He appeared as a substitute in United’s 4-0 League Cup final win over Wigan Athletic the following month – alongside fellow new signing Nemanja Vidic.

Right wing: Theo Walcott
Another January signing that made the headlines in 2006 was the transfer of teenager Theo Walcott, who signed for Arsenal from Championship side Southampton. Walcott was only 16 at the time and didn’t make an appearance for the Gunners in the 2005/06 campaign. However, he was shockingly called up by England manager Sven-Goran Eriksson for the World Cup that summer and became the country’s youngest ever player in the May of ‘06, aged 17 years and 75 days.

Central midfield: Roy Keane
Manchester United’s inspirational captain Roy Keane shockingly left the club in the November of ’05, after disagreements with manager Alex Ferguson and his assistant Carlos Queiroz. The Irish legend’s acrimonious exit was hastened after he criticised his team-mates in an interview for MUTV, following a 4-1 defeat to Middlesbrough. Keane joined Celtic in the new year but retired at the end of the season.

Central midfield: Steven Gerrard
Another all-action captain who hit the headlines in the 2005/06 season was Liverpool skipper Steven Gerrard. The Merseyside-born midfielder won the PFA Player of the Year award as he led his side to third place, with the Reds finishing on 82 points; their highest total since the eighties. Gerrard also put in a stunning captain’s performance in the FA Cup final, scoring twice as Liverpool came from behind to beat West Ham on penalties.

On This Day in 2006, Gerrard scored that worldie against West Ham to win us the FA Cup 🚀 #LFC pic.twitter.com/1RQu0xXhkA

Left wing: Nigel Quashie
Scottish international Nigel Quashie had the misfortune of suffering relegation for the second successive season in 2006. The former Portsmouth player joined Southampton in January ’05, with the Saints dropping into the Championship a few months later. Quashie transferred to West Brom midway through the 2005/06 campaign but couldn’t help his new side out of the bottom three. The Baggies went down alongside another West Midlands side, with Birmingham City’s four-year stay in the Premier League coming to an end.

Striker: Alan Shearer
Newcastle United’s legendary striker Alan Shearer retired at the end of the 2005/06 season, with his final strike fittingly coming against the Magpies’ local rivals Sunderland in a 4-1 win. The Geordie hero’s goal against the Black Cats was his 260th in the Premier League, a record that looks unlikely to be beaten. Meanwhile, Sunderland suffered a far more painful farewell, as they finished rock-bottom in the league with just three wins and 15 points.

Striker: Thierry Henry
At the end of the 2005/06 season Arsenal fans said goodbye to Highbury, the club’s home for over 90 years. Influential French forward Thierry Henry scored a hat-trick in a fairytale finish for the supporters in attendance, as Arsenal beat Wigan Athletic 4-2 on the last day of the campaign to jump ahead of Tottenham Hotspur for the all-important fourth place spot. Henry went on to finish as a runner-up in the Champions League final and World Cup final that summer.

The last game at Highbury, a Thierry Henry hattrick, Lasagne Gate, Spurs bottling and top 4 Secured. So many emotions in one day 😅 #AFC