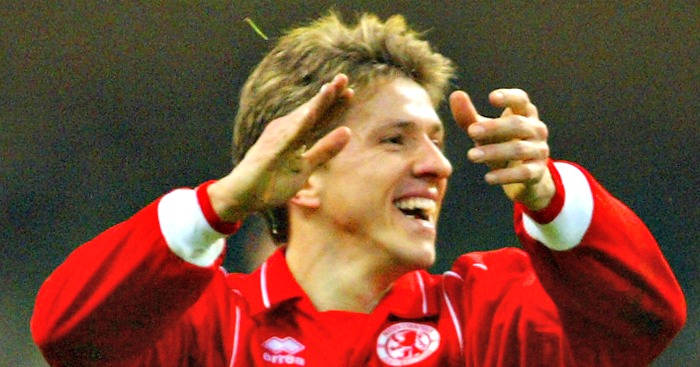 Oh Juninho. More action from the Alphabet League; here are the joys of the J-Team…

Goalkeeper: David James
No goalkeeper has played more Premier League games than David James. With 572 appearances in the competition, he is over 200 ahead of any currently active ‘keeper. Fabio Capello may have called him ‘Calamity’ but James was trusted by a succession of England managers over a 13-year period, winning 53 England caps on his way to becoming England’s sixth-most-capped goalkeeper of all time. If he does drop any clangers for the J-Team, Bolton legend Jussi Jaaskelainen is a more-than-able deputy. James made his Premier League debut with Liverpool. If you fancy a goalkeeper challenge, try naming two other former Reds eligible for J-Team selection.

Right-back: Glen Johnson
Johnson won the FA Cup alongside James in 2008, with the two helping Portsmouth win the famous old trophy for the first time since 1939. Unlike his Pompey team-mate, Johnson did win a Premier League title in his career, as part of Chelsea’s 2004/05 squad under Jose Mourinho. Johnson went on to enjoy the varied man-management styles of Harry Redknapp at Portsmouth and Rafa Benitez at Liverpool, where he stayed for six seasons. He helped the Merseyside club to a League Cup win in 2012, scoring the decisive penalty against Cardiff City in the shoot-out after the final had ended in a 2-2 draw. Other full-back options include Daryl Janmaat, Jonny and one-time England international Carl Jenkinson.

Centre-back: Phil Jagielka
Sheffield United veteran Phil Jagielka is the standout choice for a centre-back spot in the J-Team, having spent 12 years at ever-present Premier League club Everton. The Greater Manchester-born defender arrived at Goodison Park in 2007, after suffering relegation with the Blades during his first spell at Bramall Lane. The club’s doomed 2006/07 campaign did include a famous win over Arsenal, a game that featured Jagielka heroically keeping a clean sheet after replacing the injured Paddy Kenny in the nets. 13 years later, Sheffield United’s top-flight return will end on a much happier note, with special manager Chris Wilder leading the side to seventh spot in the currently frozen Premier League table.

On this day in 2009, Phil Jagielka scored the winning penalty against Manchester United to send the Blues to the FA Cup Final.

Centre-back: Ronny Johnsen
Norwegian legend Ronny Johnsen takes the other centre-back place, having gained immortality at Manchester United in the late nineties. Part of the Red Devils side in their prodigious 1998/99 season, Johnsen started in the FA Cup and Champions League finals as United achieved an impossible dream. He left England in the mid-noughties as a three-time Premier League title winner. Other options in the centre of defence include another Norwegian Johnsen in Erland, the much-maligned Phil Jones and Nils Eric Johansson.

Left-back: Rob Jones
Rob Jones makes it two former Liverpool players in the J-Team’s full-back slots, with the undercapped star regularly playing on the left side for the Reds to accommodate Jason McAteer on the right. Jones was forced to retire early because of injuries but made enough of an impact to be considered one of the Premier League’s finest ever defenders. J-Team manager Martin Jol wouldn’t have the biggest pool of players to choose from but Rob Jones completes a solid back-line for the side.

On this day in 1991, Rob Jones joined Liverpool from Crewe. He made 243 appearances for the club, winning an FA Cup & League Cup title. #LFC pic.twitter.com/Rv3dZTzmKr

Defensive midfield: Jermaine Jenas
Former Tottenham midfielder Jermaine Jenas spent time playing under Jol at White Hart Lane, with Spurs finishing fifth in 2006 and 2007. Lasagne-gate may have prevented Jol’s side from gaining Champions League qualification but Jenas was part of Harry Redknapp’s Tottenham squad that qualified for the tournament in 2010, with the following campaign marking the club’s first involvement in Europe’s premier competition since 1962. Tottenham reached the last four in the sixties but Jenas missed out on becoming a Champions League semi-finalist, as Spurs crashed out to Spanish giants Real Madrid in the quarters. However, he had taken part in a famous campaign that proved Tottenham capable of competing on the continent, especially after wins against both Milan sides.

Defensive midfield: Jorginho
Chelsea’s Italian international Jorginho joins Jenas in midfield, with the Brazilian-born player taking a mononymous name due to his South American heritage. Oringinally criticised by the Stamford Bridge faithful, Jorginho was the poster boy for the unpopular Sarri-ball style in the 2018/19 season. But the campaign ended with a comfortable victory over London rivals Arsenal in the Europa League final and a third-place finish in the Premier League. Jorginho’s status amongst fans improved this season under the leadership of new boss and club legend Frank Lampard, with the side currently holding the final Champions League qualification spot. Naturally, Jorginho will be on spot-kick duty for the J-Team, with his run-up-and-jump penalties infuriating goalkeepers across the Alphabet League.

Attacking midfield: Juninho
The little Middlesbrough magician completes the J-Team’s midfield, Juninho remains the only man to win the Premier League Player of the Season award at a relegated club. He may have been part of a side that lost both domestic finals in Boro’s hauntingly memorable 1996/97 season but the smiles as he lifted the League Cup in 2004 went some way to exorcising the near-misses of yesteryear. Other J midfielders include Claus Jensen, Miles Jedinak, Vinnie Jones, Seth Johnson, Michael Johnson and United States legend Cobi Jones.

A crowd of 26,000 turned up at the Riverside for a League Cup 2nd round tie with Chesterfield. The reason? The return of Juninho, the Brazilian superstar making his 2nd Boro debut in a 2-1 win after returning on loan. pic.twitter.com/sUlsrjqAtC

Wing-forward: Gabriel Jesus
Brazilian forward Gabriel Jesus may be used to playing second fiddle to fellow South American Sergio Aguero at Manchester City but he gets star billing in the J-Team. Jesus has only just turned 23 and will no doubt reach half a century of international caps before his mid-twenties, by which time he could well be the main man in City’s forward-line. Already a winner of two Premier League titles, Jesus will be hoping to emulate Aguero’s domestic success and improve on his European record. If he can inspire the Citizens to Champions League glory in the future, Jesus will have fed the 50,000 at the Etihad the one thing they prize the most.

Gabriel Jesus only has 4 less goals and 4 less assists than Rashford in the Premier League.

Wing-forward: Diogo Jota
Like Jesus, Jota is still in the early stages of his career but continues to impress for a Wolverhampton Wanderers side making themselves at home in the top half of the Premier League table. He scored 18 goals in the club’s promotion-winning 2017/18 campaign, with the Portuguese contingent at Molineux ensuring Nuno’s first season as manager ended successfully. Jota bagged a hat-trick as Wolves emphatically beat Espanyol 4-0 in the last 16 of the Europa League this season and he will hope that his club form warrants a place in Portugal’s European Championship squad next year.

Striker: Raul Jimenez
Jota’s club team-mate Raul Jimenez completes the J-Team’s front three, with the Mexican striker proving to be one of the Premier League’s most lethal strikers this season. Other forward options include England international Andrew Johnson, Manchester United’s Daniel James, Kenwyne Jones, Finnish hero Jonatan Johansson, fox in the box and Arsenal flop Francis Jeffers, Matt Jansen and the riot-inducing Mo Johnston. Of course, none of these players cost as much Newcastle United’s non-goalscoring forward Joelinton…maybe Pochettino can get him firing.