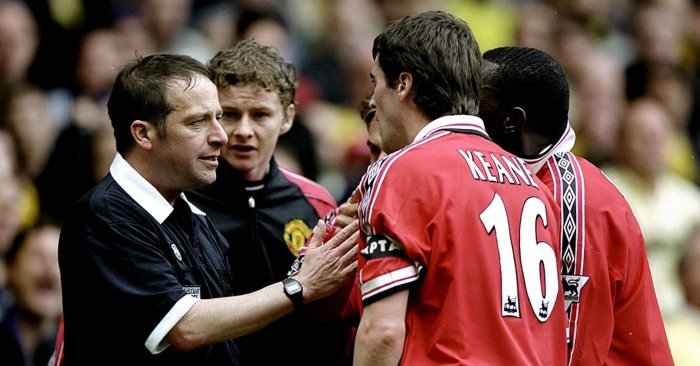 Here are the headliners form the 1998/99 season; we think something might have happened that season…

Goalkeeper: Peter Schmeichel
The nineties proved to be an incredibly successful decade for Manchester United, with imposing goalkeeper Peter Schmeichel a key figure throughout. In November ’98 the Danish legend announced his intention to leave the club the following summer. Schmeichel’s farewell season was like a Roy of the Rovers story, as the Red Devils won the prestigious treble of Premier League, Champions League and FA Cup. He famously saved a Dennis Bergkamp penalty against title rivals Arsenal in the FA Cup semi-final with the game tied at 1-1. Schmeichel’s heroics saw the game go to extra-time, with Welsh Wonder Ryan Giggs scoring the goal of a lifetime to send United into the final. In his last ever game for the club, Schmeichel captained Manchester United to a breathtaking victory against Bayern Munich. A fitting end for a Premier League all-time great.

Right-back: Danny Mills
Charlton Athletic made their first Premier League appearance in the 1998/99 season after winning promotion from the First Division the previous campaign. The team made a decent start to life in the top flight, going three games without conceding a goal. However, a dreadful period from November to January saw them without a victory and left them needing a positive result in the penultimate game of their campaign. The match against Aston Villa was one of the games of the season with red cards and own goals but Charlton defender Danny Mills provided the most memorable moment, scoring in the 89th minute to give the Addicks a 4-3 victory and a chance of survival on the final day. Unfortunately for Mills and his team-mates, they lost to Sheffield Wednesday the following game and went back down to the second tier.

Centre-back: Jonathan Woodgate
Leeds United continued their good form in the Premier League by finishing fourth in the 1998/99 season, with a crop of exciting youngsters coming through. Defender Jonathan Woodgate was one of them, having an incredible breakthrough campaign that ended with him becoming one of England’s youngest debutants. The teenage centre-back even had a say in the title race as Leeds defeated Arsenal 1-0 in the Gunners’ penultimate game of the season to hand Manchester United the advantage going into the final round of fixtures. Woodgate was in incredible form as his side kept a clean sheet against the reigning champions, clearing a Kaba Diawara volley off the line and also denying Dennis Bergkamp in the dying moments of the match. The future looked bright at Elland Road.

Centre-back: Marcel Desailly
In the 1998/99 season, Chelsea continued to purchase star names from abroad in their quest for a maiden Premier League crown, with French World Cup winner Marcel Desailly joining from European giants AC Milan. The D-Team star helped the London side to third in the league as Chelsea qualified for the Champions League for the first time. The club spent heavily on Lazio striker Pierluigi Casiraghi at the start of the campaign too but the Italian international suffered a career-ending injury just a few months after his arrival in England. However, the incomparable Gianfranco Zola continued to light up Stamford Bridge, with Casiraghi’s absence becoming an after-thought by the end of another impressive season.

Left-back: Nigel Winterburn
Arsenal’s ageing defence proved they weren’t over the hill as they won the Premier League and FA Cup in the 1997/98 season and continued to impress the following campaign. Despite Manchester United beating them to the title, the Gunners possessed the meanest back line in the division, with just 17 goals conceded in the league.

England manager Glenn Hoddle was sacked during the season after making controversial comments about the disabled, with former Leeds boss Howard Wilkinson taking temporary charge of the national team whilst a permanent replacement was debated over. Wilkinson picked Lee Dixon, Tony Adams, Martin Keown and Yorkshire-born ‘keeper David Seaman for a friendly against France in February ‘99, with golden oldie Nigel Winterburn the only member of the Arsenal rearguard to miss out.

Maybe it was this…

🎂 – It’s Nigel Winterburn’s birthday. Here he is absolutely seeing his arse in 1998. pic.twitter.com/tG6sVfB5LZ

Right wing: Steve McManaman
Merseyside-born Steve McManaman angered the fans of his local club by agreeing to leave Liverpool and sign for Spanish giants Real Madrid at the end of the 1998/99 campaign. The England international’s refusal to sign a new contract at Anfield meant he was available to move for free under the Bosman ruling, resulting in a section of Liverpool fans booing him during the final months of the season. Supporters also had the confusing managerial partnership of Roy Evans and Gerard Houllier to think about, although it didn’t last long, with Evans departing in the November of ’98. The off-pitch turbulence contributed to a disappointing campaign as Liverpool finished seventh, leaving Houllier with a huge rebuilding job on his hands in the summer and no McManaman to boot.

Defensive midfield: Roy Keane
After missing most of the 1997/98 season through injury, Roy Keane came back into the Manchester United side as determined as ever. The Irish legend captained the team to domestic glory as the Red Devils came from behind against Tottenham Hotspur on the last day of the season to win the Premier League title. But Keane suffered another injury in the FA Cup final, coming off after just ten minutes and he missed out on the Champions League Final through suspension. His inspirational performance against Juventus in the semi-finals is legendary, scoring a brilliant headed goal for the side as they came from two goals behind to win the match 3-2.

United struggled without Keane and Paul Scholes (also suspended) in the final but the never-say-die attitude instilled in the team prevailed as they again came from behind to beat Bayern Munich. Keane wasn’t too keen to join in the post-match celebrations but his contribution to the most successful season in the club’s history wasn’t to be forgotten.

Paolo Di Canio responded to being dismissed by pushing referee Paul Alcock to the ground – he received an 11-game ban🔴 pic.twitter.com/l6OY3PDTCe

Left wing: David Ginola
David Ginola’s spell at Newcastle United saw the Magpies finish as runners-up in the Premier League twice; without him they finished 13th in 1998 and 13th again in 1999. Newcastle’s luck had run out, with Tottenham Hotspur benefiting from the Frenchman’s talents as Ginola won the PFA Player of the Year and the FWA Footballer of the Year whilst playing for the club in the 1998/99 season. The G-Team star’s solo goal against Barnsley in the FA Cup highlighted the incredible skill Ginola possessed but his superb long-range strike against Manchester United in a League Cup quarter-final tie was just as special. Tottenham knocked out the Red Devils and went on to win the competition, preventing the otherwise all-conquering Manchester United side from winning a quadruple.

Striker: Pierre Van Hooijdonk
Nottingham Forest’s 1998/99 season was marred by star striker Pierre Van Hooijdonk refusing to play the club. The Dutch striker had been in imperious form for Forest the previous campaign, scoring 29 goals as the club won the First Division. But Van Hooijdonk felt promises to strengthen the side weren’t kept and he demanded a transfer away from the City Ground. He faced a backlash from fans, pundits and team-mates with the side fighting a relegation battle in his absence, desperate for goals. He eventually returned to the team and scored vital goals against rivals Derby County, Liverpool and Everton but the damage had been done as Forest finished in last place. The season marked the last time the two-time European Champions played Premier League football.

Striker: Dwight Yorke
Dwight Yorke started the season at Aston Villa but agitated for a move to Manchester United after Alex Ferguson made it clear that he wanted Yorke at Old Trafford. He formed a deadly partnership with C-Team striker Andy Cole at United, with the two scoring 35 league goals between them as they went unbeaten in the second half of the season. With the addition of Yorke, Ferguson had created one of the Premier League’s greatest ever attacks and the resulting entertainment didn’t disappoint.

Teddy Sheringham and Norwegian legend Ole Gunnar Solskjaer provided excellent cover and scored the goals that won the Champions League in dramatic fashion. Yorke bagged a hat-trick against Leicester City in a 6-2 win and finished as top scorer in the league. Solskjaer scored four goals against Nottingham Forest after coming on a substitute. Sheringham neatly tucked away the first goal and set up the second in the FA Cup final win against Newcastle United. Cole scored the winning goal against Spurs on the last day of the season to secure the Premier League title. The nineties had served Manchester United well.