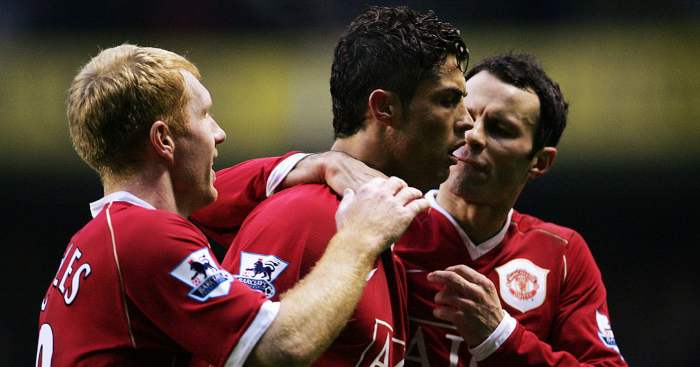 We’ve had a team made up of players who won the Premier League in their first season at a club, so here’s a side picked from those who departed after a title win. Georginio Wijnaldum could soon become the latest player to follow in the footsteps of Man Utd legends and others.

Goalkeeper: Peter Schmeichel
Petr Cech is eligible for this side, having departed Stamford Bridge in the summer of 2015. Jose Mourinho had just guided Chelsea to a fourth Premier League title, with Thibaut Courtois ousting Cech as first-choice goalkeeper. Schmeichel was very much Alex Ferguson’s No. 1 in the 1998/99 season, helping Man Utd to the Treble and captaining them in the Champions League final in his last ever game for the club. The Red Devils managed to retain the Premier League trophy without the Great Dane in 2000 but went out to Real Madrid at the quarter-final stage in Europe. If you fancy a goalkeeper challenge, try naming a few other Man Utd keepers who left Old Trafford after a title-winning season.

Right-back: Lee Dixon
Gary Neville retired a few months before Man Utd reigned in the 2010/11 season, ruling him out of contention for this side. Lee Dixon spent the latter years of his career behind Neville in the England reckoning (although he got far more minutes than Arsenal team-mate Nigel Winterburn) but ended his club career on a high after the Gunners won the title in 2002. World Cup and Champions League winner Juliano Belletti added a Premier League medal to his collection in his final season at Chelsea, leaving the Blues after their 2010 win under Carlo Ancelotti.

Centre-back: Tony Adams
Just like Dixon, Tony Adams was part of Arsenal’s 2001/02 title-winning squad and retired before the start of the following campaign. The Gunners finished as runners-up to Man Utd in 2003 without the one-club legend but returned to the top a year later. Adams’ former team-mate Martin Keown also left Highbury as a title winner, departing for Leicester after the Invincibles season.

Centre-back: John Terry
Even if Antonio Conte didn’t select him in the final game of Chelsea’s 2016/17 title-winning season, John Terry may have still graced the pitch to take the 26th minute applause in full kit, waving goodbye to an appreciative Stamford Bridge crowd. The captain, leader and legend left the club as a winner, much like his former teammate Ricardo Carvalho; the Portuguese defender swapped London for Madrid after Chelsea won the league in 2010. The Blues failed to retain the title in the seasons following Terry’s and Carvalho’s departures.

Left-back: William Gallas
Though not quite as popular as Terry at Stamford Bridge, William Gallas did help the Blues to two Premier League titles in the mid-noughties. The Frenchman left for Arsenal, with Ashley Cole going in the opposite direction, after Chelsea’s successful 2005/06 season and although his old club finished 15 points ahead of the Gunners in 2007, the title went to Man Utd. The Red Devils have moved on a few defenders following title glory: Laurent Blanc, Wes Brown, Steve Bruce, Gabriel Heinze, John O’Shea and Mikael Silvestre all left Old Trafford with fresh Premier League medals around their necks.

Right-wing: David Beckham
David Beckham is another former Man Utd player who left the club on a high, although that boot in the face from Fergie in his final season probably dampened his mood somewhat. Goldenballs become a Galactico in the summer of 2003 after his sixth Premier League title win, with the Red Devils slipping to third place at the end of the following season. Damien Duff and Ray Parlour are both eligible for this side, leaving Chelsea and Arsenal respectively after title wins.

Defensive midfield: N’Golo Kante
Linked with a move away from Stamford Bridge this summer, Kante arrived in the capital after helping Leicester City to a remarkable Premier League title triumph in 2016. The Foxes ended up in the bottom half after his departure, whilst Chelsea thrived with the Frenchman in their midfield, finishing top of the pile in 2017. One of Kante’s teammates from that season also qualifies for this side, with Nemanja Matic leaving for Man Utd. Michael Ballack, Joe Cole and Deco all left Stamford Bridge as league winners, too.

Attacking midfield: Paul Scholes
Man Utd hero Paul Scholes retired twice, with both of his departures coming after victorious domestic campaigns. The Greater Manchester-born maestro said his first goodbye in 2011 but returned half-way through the following campaign to help Fergie in the fight against the noisy neighbours. Scholes didn’t fancy listening to David Moyes’ team talks and said farewell for good alongside Ferguson in 2013, after picking up his 11th and final league title. The trophy hasn’t returned to Old Trafford since.

Left-wing: Cristiano Ronaldo
Jadon Sancho will have to show a bit more than he did against Denmark if he’s to live up to the expectations of the No. 7 shirt at Old Trafford. Cristiano Ronaldo was the incumbent in the 2008/09 season and he helped fire the Red Devils to a third successive league title. The Portuguese icon left for Real Madrid shortly after and without him, Man Utd fell just short of a record-breaking four-in-a-row in 2010.

Striker: Eric Cantona
The original famous Premier League No. 7, there’s certainly a lot of love out there for Eric Cantona. The Frenchman shocked fans all over the world following the announcement of his retirement in 1997, shortly after he had captained Man Utd to another title win. Cantona’s replacement at Old Trafford also left the club with a brand new Premier League medal: Teddy Sheringham returned to the capital with Spurs after the Red Devils’ successful 2000/01 campaign, with the Londoner picking up the PFA Player of the Year award for his outstanding performances in the season.

Striker: Didier Drogba
Not content with his Champions League-winning fairy-tale ending in 2012, Didier Drogba returned to Stamford Bridge for another shot at glory in 2014. The Ivorian’s final season in a Chelsea shirt concluded with more silverware as he helped Jose Mourinho’s side to a Premier League title win. Other forwards to leave on a high include Eidur Gudjohnsen, Drogba’s former team-mate, as well as Louis Saha, Nwankwo Kanu, Ian Wright and Ole Gunnar Solskjaer.