Germany brought football back into our lives. This XI made history for the country in one way or another. 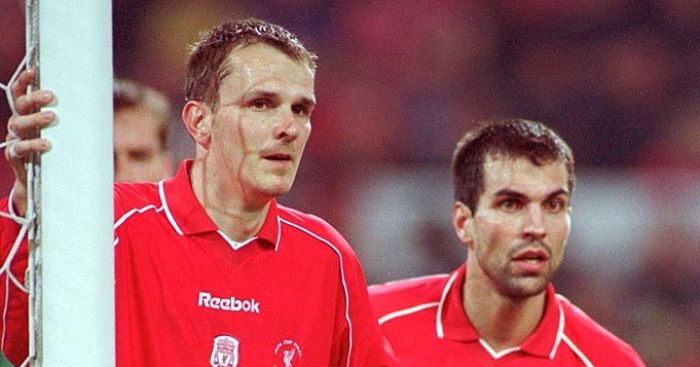 Football is back and the Bundesliga was back first. So, here’s an XI made up of Germans who achieved a first whilst playing Premier League football.

Goalkeeper: Jens Lehmann
Lehmann became the first German player to win the Premier League in the 2003/04 season, as a member of Arsenal’s ‘Invincibles’. Not bad for his first season in English football. He played for Schalke, Borussia Dortmund and Stuttgart in the Bundesliga.

Right-back: Markus Babbel
In 2001, German international Markus Babbel became the first Premier League player to score in a UEFA Cup final, finding the net after just three minutes in Liverpool’s incredible 5-4 victory against Alaves. Dietmar Hamann also played in the match but didn’t score and Stefan Malz was on the bench for Arsenal in their defeat to Galatasaray the year before.

Centre-back: Robert Huth
One of Leicester City’s title winners in the 2015/16 season, Huth became the first German player to make 300 Premier League appearances during the following campaign. He never played a Bundesliga game, having spent his whole career in England at Chelsea, Middlesbrough and Stoke City, as well as the Foxes.

Centre-back: Per Mertesacker
The giant German became the first of his countrymen to captain an FA Cup-winning team in 2015. Mertesacker led Arsenal to victory over Aston Villa and even managed to get on the scoresheet himself as the Gunners ran out 4-0 victors. Two years later, he was the skipper in another FA Cup final, with Arsenal defeating Chelsea 2-1.

Left-back: Michael Tarnat
One of Bayern Munich’s crestfallen players in the 1999 Champions League final, Michael Tarnat suffered more disappointment after joining Manchester City in the early 2000s. He became the first German to score an own goal in the Premier League during City’s defeat to Arsenal in February 2004.

Defensive midfield: Dietmar Hamann
Hamann became the first German to win a Champions League trophy whilst playing for a Premier League club after Liverpool’s miracle in 2005. Steven Gerrard got all the plaudits but Hamann’s introduction in the second half helped turn the game around as the Reds scored three times to even the match. Hamann converted Liverpool’s first penalty in the shoot-out and watched on as Dudek’s spaghetti legs won the cup.

Central midfield: Matthias Breitkreutz
Breitkreutz became the first German player to appear in the Premier League in December 1992. The uncapped midfielder came on as a substitute for Dalian Atkinson in Aston Villa’s 1-1 draw with Manchester City at Maine Road. Breitkreutz’s fellow countryman Stefan Beinlich also appeared for Villa in the Premier League’s inaugural season, becoming the second German to feature in the competition.

Striker: Uwe Rosler
An East German international before the reunification of Germany, Uwe Rosler became the first of his countrymen to score a Premier League goal when he put Manchester City ahead against Ipswich Town in March 1994. Another City player became the second German to score in the competition five days later, with Steffen Karl bagging a late goal for the Citizens against Southampton in early April. Rosler also became the first German player to be sent off in the Premier League during the 1994/95 season.