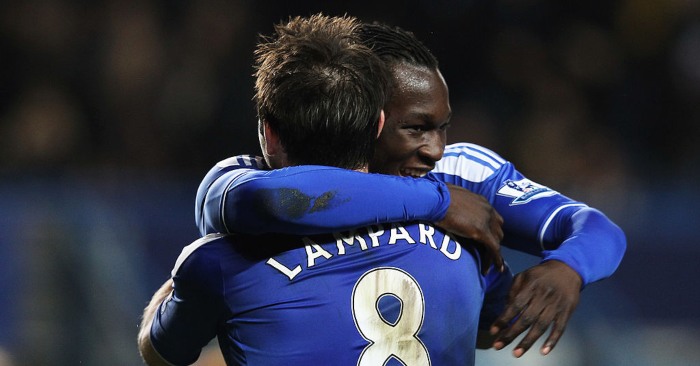 Which team leads the the letters so far in the Alphabet League? We’re up to L…

Goalkeeper: Jens Lehmann
The L-Team goalkeeper spot is hotly contested, with current and former ‘keepers from north London eligible for the side. Hugo Lloris and Jens Lehmann are the stand-out candidates, followed by Bernd Leno and John Lukic. Lehmann would be the more entertaining pick; who wouldn’t want to see him fighting with opposition players, referees and his own team-mates in the Alphabet League? He’s even given the finger to the crowd before. If you fancy a goalkeeper challenge, try naming two Danish international ‘keepers eligible for L-Team selection.

Right-back: Lauren
Another former Arsenal star gets the right-back slot, with Lauren joining ‘Invincibles’ team-mate Lehmann in the side. The Cameroon international spent six successful years with Gunners, performing well at the back alongside London-born stars Sol Campbell and Ashley Cole in the noughties. Victor Lindelof would be able to cover the position due to stronger competition in the central defender slots, with the Swedish international’s presence ensuring Stephan Lichtsteiner doesn’t get any Alphabet League action.

I’ll add Lauren to my list. Always hear people saying he was the wink link of the Invincibles team but he was top class

Centre-back: Frank Lebouef
Part of a cosmopolitan revolution at Stamford Bridge, Frank Lebouef played in a Chelsea side full of continental talent. Ruud Gullit’s influential spell in the Premier League led to a foreign invasion as Chelsea went from Townsend at the start of the decade to the world’s end come the late nineties. The Frenchman helped the side to FA Cup, League Cup and Cup Winners’ Cup victories, as well as becoming famous for his penalty-taking prowess. After playing in the 1998 World Cup final, Lebouef was joined by fellow World Cup winner and D-Team star Marcel Desailly as Chelsea continued to make strides towards the top of the table. Danish legend Martin Laursen is a great back-up option, with Dejan Lovren also in reserve.

Centre-back: Aymeric Laporte
A star of the formidable Manchester City side last season, Aymeric Laporte’s form for the Citizens still hasn’t brought him any international caps for France. Fellow countryman and former City player Eliaquim Mangala has been part of two international tournament squads. Football and logic don’t always play well together. Laporte has flirted with the Spanish national side but an appearance for Les Bleus can’t be far away if he continues to impress and stays fit for Pep Guardiola’s side. If this season’s Champions League resumes and Laporte can help City progress past the last four for the first time, he’ll be knocking even harder at Didier Deschamps’ door.

Left-back: Graeme Le Saux
Despite the ubiquitous foreign presence at Chelsea in the late nineties, experienced England internationals were still very much sought after at Stamford Bridge, with Premier League winner Graeme Le Saux signing for the club in 1997. Before winning the 1994/95 title with Blackburn Rovers, Le Saux had spent the nascent years of his career at Chelsea. His second spell at the club proved to be far more fruitful than the first, as he helped the side to domestic and European success alongside fellow L-Team member Frank Lebouef. Another England international provides cover for the left and centre of defence, with West Midlands-born Joleon Lescott an able deputy.

Right wing: Rob Lee
A member of Newcastle United’s ‘Entertainers’ team, Rob Lee fends off competition from Aaron Lennon for a spot on the right side of midfield in the L-Team. Both players won 21 caps for England and both men were part of club sides that missed out on Premier League glory despite competing near the top of the table. However, Lee’s decade-long spell at St James’ Park saw him come a lot closer than the Yorkshire-born Lennon did at Spurs, with Newcastle’s second-place finish to Manchester United in the 1995/96 season a particular close call. ‘Bald Eagle’ Attilio Lombardo is another option for the right-wing spot.

Our second inductee of the evening into the #NUFC Hall of Fame is Rob Lee.

Central midfield: Matt Le Tissier
Le Tissier would be able to find some common ground with fellow L-Team member Laporte, with the Saints hero knowing all about undercapped careers. Perhaps things would have been different for Le Tissier if he had joined a bigger club, with interest from Chelsea and Tottenham arising during the nineties. The one-club man never felt the need to leave the south coast and he spent years entertaining the crowd at The Dell with his repertoire of outrageous goals and gave the fans a perfect farewell to the famous old ground in the 2000/01 season.

Central midfield: Frank Lampard
Le Tissier and Lampard in the same side? The L-Team won’t have much trouble scoring from outside the box. Chelsea’s record goalscorer could probably cannon in a shot off every letter available in the Alphabet League, although he would also have to do a lot of the leg work playing alongside the Southampton legend. He’s currently the boss of his former club but it may be a little early for Lampard to player-manage the L-Team. Former Aston Villa manager Brian Little would take the hot-seat, edging out fellow League Cup-winning manager Michael Laudrup, who won the competition with Swansea City in 2013.

Striker: Romelu Lukaku
Lukaku’s departure from Manchester United continues to divide fans and pundits, with the Belgian forward regularly finding the net at Inter Milan this season. Despite coming in for criticism during his spell at Old Trafford, Lukaku’s stay in the Premier League was a memorable one, with 113 goals scored in the competition during an eight-year stay in England. He was a Chelsea player during their Champions League-winning season of 2011/12 but didn’t make the squad for the final and left Stamford Bridge the summer before their 2014/15 Premier League title win, after not featuring in Jose Mourinho’s first-team plans. However, he later finished as top scorer for Manchester United under Mourinho in 2018 as the Red Devils finished a distant second to their city rivals. He’ll be hoping trophies aren’t so hard to come by at the San Siro.

Romelu Lukaku at his best is quite something 🔥

Should Manchester United really have let him go? 😕pic.twitter.com/BjNvI9w9Ky

Striker: Alexandre Lacazette
Arsenal forward Lacazette gets the other striker spot in the side but the L-Team sub’s bench consists of famous attacking talents who had short spells in the Premier League. Celtic legend Henrik Larsson spent time on loan at Manchester United in the 2006/07 season, whilst Danish hero Brian Laudrup briefly played for Chelsea’s united nations side in the late nineties. Finland’s finest Jari Litmanen spent some time at Anfield in his thirties, having been one of the world’s most sought-after players earlier in his career.