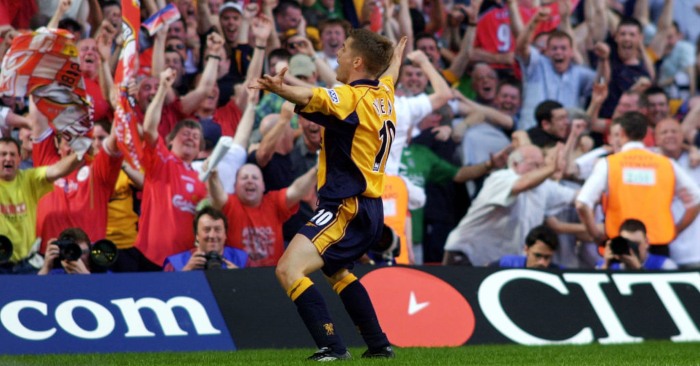 Goalkeeper: Chris Kirkland
Coventry City legend Steve Ogrizovic’s career ended in the summer of 2000 after 16 years at the Midlands club. The eighties included a famous FA Cup win for Coventry, whilst the nineties brought dramatic, yet successful, relegation battles. However, the noughties weren’t so kind. Chris Kirkland looked like he was capable of becoming another long-term fixture in the nets for the club, with the young ‘keeper putting in a series of good performances to oust Swedish international Magnus Hedman from the side in the 2000/01 season.

They went into the penultimate game of the Premier League campaign needing a positive result against Aston Villa to pull off another great escape and all seemed to be going to plan after Moroccan hero Mustapha Hadji put the Sky Blues 2-0 up in the first half. Kirkland then made a costly error, allowing Villa back in the game, and the tables soon turned on Coventry as they conceded two more goals in the last ten minutes, resulting in a 3-2 loss. For the 2001/02 season, the club would be playing second-tier football for the first time since 1967.

Right-back: Wes Brown
The 2000/01 Premier League campaign ended with another title for Manchester United and another young talent becoming a firm fixture in the first team. Greater Manchester-born Wes Brown played a part in the club’s treble-winning season but his fine domestic form for United in the early noughties led to grandiose expectations. Bayern Munich provided a harsh lesson for Brown in the quarter-finals of the Champions League, with the defender struggling against the talented German side. The Red Devils crashed out following a 3-1 aggregate defeat in the April of ’01 as Bayern got a measure of revenge after their famous loss to United in ’99.

Centre-back: Rio Ferdinand
Leeds United continued their impetuous quest to spend whatever it took to obtain domestic and European glory in the early noughties with the record purchase of West Ham United defender Rio Ferdinand. The side looked stronger than ever as they progressed to the last four of the Champions League, defeating AC Milan, Lazio and Deportivo on the way. A solid 0-0 draw in the first-leg semi against Valencia looked like a decent result, as the Spanish side left Elland Road without an away goal. However, Leeds lost the second-leg 3-0 and finished fourth in the league despite thrilling 4-3 wins over Liverpool and Spurs during the campaign. The gamble hadn’t quite paid off.

Centre-back: Alf-Inge Haaland
Former Leeds player Alf-Inge Haaland lined up for Manchester City in the 2000/01 season, with the Citizens once again a Premier League club after finishing second in the First Division. Manchester United captain Roy Keane hadn’t forgotten about the Norwegian international mocking him after the Irish legend went down with a serious injury in the 1997/98 season. Keane was unashamedly out for revenge and went in hard on Haaland with a horror challenge in the Manchester derby. Keane saw it as an eye for an eye, whilst Haaland claimed it was career-ending despite already suffering with knee complaints prior to the tackle.

There is no better – or worse – place to finish this list than Roy Keane’s shocking tackle on Alf-Inge Haland in the Manchester derby. pic.twitter.com/Vty7CZI3dh

Left-back: Ashley Cole
Arsenal once again finished the season as runners-up to Manchester United in the 2000/01 Premier League campaign but the emergence of London-born left-back Ashley Cole gave fans plenty of optimism for the future. The young defender’s excellent form earned him a first England cap in the March of ‘01 as he helped his club side reach a Champions League quarter-final. Norwegian legend John Carew ended the Gunners’ European dreams as they lost to Valencia but Frenchman Thierry Henry provided a moment of genius in the domestic game. The influential star’s incredible goal against Manchester United during the season is one of the most memorable strikes in Premier League history.

Right-wing: Benito Carbone
Bradford City celebrated their Premier League survival by singing Italian maestro Benito Carbone, with the Bantams spending heavily on wages during the campaign as they looked to consolidate their top-flight status. Carbone provided some flamboyant moments of magic but his talent couldn’t help the side to any lasting form as they finished rock-bottom of the league. The relegation left Bradford in dire financial straits and Carbone eventually surrendered the money owed to him by the club. Twenty years on, Bradford City now play in League Two.

Central midfield: Matt Holland
Ipswich Town ended the 1999/2000 season in fine style, winning promotion to the Premier League with a play-off victory against Barnsley. The Tractor Boys were tipped to go straight back down but had an incredible year that ended in a fifth-place finish and UEFA Cup qualification. Marcus Stewart had the season of his life up front and Matt Holland proved to be an inspirational leader in the centre of midfield. Ipswich even gave fellow-promoted side Manchester City a push onto the Premier League trapdoor, with Holland scoring in a 2-1 win against the Citizens to seal City’s instant return to the second tier.

Matt Holland signed for Ipswich Town from Bournemouth for £800,000 in the summer of 1997

He went on to become one of the top 5 signings in the club’s history. Legend pic.twitter.com/HhMLZREmtD

Central midfield: Matt Le Tissier
Matt Le Tissier’s time at Southampton was coming to end in the early noughties, with the undercapped star’s injuries restricting him to just eight Premier League appearances in the 2000/01 season. The campaign was Southampton’s last at The Dell and in the final game of the season, the Saints legend provided fans with a fairytale moment. The game against Arsenal looked set to finish in a 2-2 draw but Le Tissier’s introduction as a substitute in the last 15 minutes led to a Roy of the Rovers ending. The club legend bagged a last-minute winner and it turned out to be his last ever goal. It was meant to be.

Left wing: Nick Barmby
England international Nick Barmby caused a stir in the summer of 2000 by agreeing to switch Merseyside allegiances. The Yorkshire-born star had been an Everton player for four seasons but made the controversial move to Liverpool as manager Gerard Houllier looked to build a squad capable of mounting a title challenge and competing abroad. Barmby also made the headlines playing for the national side during the campaign, scoring the first goal of Sven-Goran Eriksson’s reign as England boss in a 3-0 win against Spain.

Forward: Teddy Sheringham
Despite turning 35 during the 2000/01 season, Manchester United’s veteran forward Teddy Sheringham had one of the finest campaigns of his long career. The golden oldie picked up the PFA and FWA Player of the Year awards as the Red Devils dominated the Premier League yet again. United superbly put title rivals Arsenal to the sword in the February of ’01, thrashing the London side 6-1 with Sheringham bagging the final goal of the game.

Forward: Michael Owen
Sheringham’s fellow England international Michael Owen had a fantastic campaign at Liverpool, as the club won the League Cup, the FA Cup and the UEFA Cup. Owen’s heroics in the FA Cup against Arsenal made the headlines, as he scored twice in the last ten minutes to turn the final on its head. He also starred in a dramatic UEFA Cup final, as Liverpool won a thrilling encounter against Alaves 5-4. By the end of 2001, Owen’s performances saw him named as Ballon d’Or winner. He became the fourth Englishman to win the award, following in the footsteps of Stanley Matthews, Bobby Charlton and Kevin Keegan.