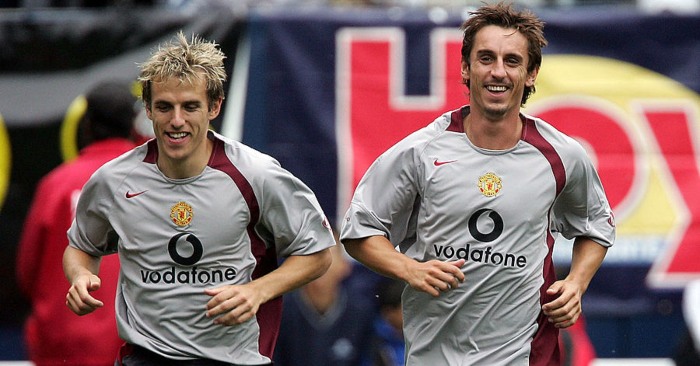 The N-Team are next up in the Alphabet League…

Goalkeeper: Antti Niemi
Former Southampton ‘keeper Antti Niemi gets the number one spot in the N-Team, with the Finnish goalkeeper coming close to winning the FA Cup in 2003. The Saints narrowly lost out to Arsenal as David Seaman had his cup-winning captain moment, with Robert Pires beating Niemi to score the only goal of the match. If you fancy a goalkeeper challenge, try naming two ‘keepers eligible for N-Team selection who played for Manchester City.

Right-back: Gary Neville
The N-Team can claim ownership of one of the Premier League’s finest ever right-backs, with Gary Neville clocking up 400 appearances in the competition during his trophy-laden time at Manchester United. Famously disliked by the Anfield crowd during his playing days, Neville might not be too happy with the managerial options available for the N-Team, with Liverpool legend Phil Neal one of the only candidates. Swedish legend Roland Nilsson provides the back-up, with the former Sheffield Wednesday and Coventry City player appearing in the inaugural Premier League season.

Centre-back: Lucas Neill
Another N-Team member loathed by the Anfield faithful, Lucas Neill reportedly turned down Liverpool for the attractive financial package on offer at West Ham United and once broke Merseyside-born Jamie Carragher’s leg whilst playing for Blackburn Rovers (and Carra nearly had him nobbled in a shopping centre). The Australian defender certainly won admirers at Ewood Park with his passionate displays, helping Rovers consolidate their position in the Premier League. Neill’s former team-mate Ryan Nelsen and Serbian international Matija Nastasic are the back-up options at centre-back.

Centre-back: Steve Nicol
A player Liverpool fans can definitely get behind, Steve Nicol was part of the club’s title-winning teams of the eighties. The Scot was purchased by legendary manager Bob Paisley as a long-term replacement for N-Team boss Phil Neal on the right side of Liverpool’s defence. However, Nicol’s versatility saw him play in a variety of positions during his 13-year stay at Anfield and he continued to play top-flight football into his late thirties for Sheffield Wednesday.

Left-back: Phil Neville
The younger Neville made his Manchester United debut in the club’s frustrating 1994/95 season and went on to win an incredible six Premier League titles during his stay at Old Trafford. The Manchester-born player left for Everton in 2005 after falling behind in the pecking order to flops Eric Djemba-Djemba and Klerberson. He stayed with the Toffees until his retirement in 2013, ending his career with 505 top-flight appearances.

Central midfield: Wilfred Ndidi
Nigerian international Ndidi has been a Leicester City favourite since signing for the club in 2017. He has proven himself to be a worthy successor to K-Team star N’Golo Kante in the Foxes’ midfield since the title-winner’s departure for Chelsea. Ndidi has provided excellent cover in the holding role for the creative talents of James Maddison and Youri Tielemans as Leicester continue to impress in the Premier League.

Attacking midfield: Samir Nasri
It feels like a long time since Samir Nasri was one of the most talked about players in England for his on-pitch performances, with the former Arsenal and Manchester City star impressing in the early years of his Premier League career. His acrimonious departure from north London made him a figure of hate at the Emirates, especially after his unfortunate comments questioning the passion of Arsenal fans. Nasri continued to court controversy throughout his career, with a bitter end to his national career whilst still in his twenties and a doping violation that saw him receive a lengthy ban from the game.

Wing-forward: Nani
One of Portugal’s heroes at Euro 2016, Nani has played over 100 times for his country since making his national team debut in 2006. The skilful winger signed for Manchester United from Sporting Lisbon a year after his first cap, following the same path as his fellow countryman Cristiano Ronaldo. The two won the 2008 Champions League title together for the Red Devils, with Nani crucially converting a penalty in his side’s shoot-out victory against Chelsea. Former Manchester City player Jesus Navas provides competition for the wing positions.

Luis Nani’s top 10 goals for Manchester United. This man was so inconsistent but he scored so many great bangers. pic.twitter.com/eBsiYqcgbX

Wing-forward: Peter Ndlovu
A hero for Coventry City in the early Premier League years, Peter Ndlovu was a trailblazer for African players in England. The Zimbabwean played under N-Team boss Phil Neal at Highfield Road and became famous for his goalscoring exploits against big sides, with a hat-trick at Anfield possibly his most famous performance in a Coventry shirt. Ndlovu and Nani’s pace and trickery on the flanks would surely cause plenty of problems for defences in the Alphabet League.

Striker: Alvaro Negredo
Former Spanish international Alvaro Negredo leads the attack, with the N-Team struggling for top-class strikers. Belgian hero Luc Nilis is eligible for the side but only played a few times for Aston Villa before he suffered a career-ending injury. Arsenal youngsters Reiss Nelson and Eddie Nketiah may feature in the future, with Everton’s Oumar Niasse, Mike Newell, Szilard Nemeth and England’s one-cap wonder David Nugent the current back-ups.