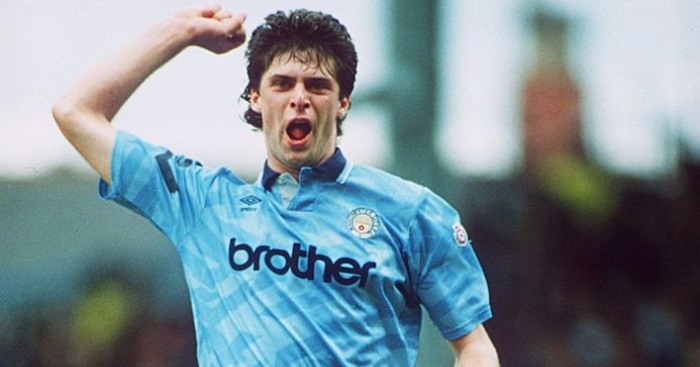 Goalkeeper: Andy Quy
Now a respected goalkeeping coach, Andy Quy started his playing career at Tottenham Hotspur, although he never featured for the first team. Quy went on to play for Hereford but was forced to retire early because of injury and subsequently took his coaching badges. He spent 12 years on the staff at Stoke City and coached England’s youngest ever goalkeeper, Jack Butland. If you fancy a goalkeeper challenge, which outfield Q-Team player once saved a penalty during a stint in-between the sticks after his side’s original ‘keeper was sent off?

Right-back: Wayne Quinn
Quinn, a former England Under-21 international, was a left-sided player but he’ll have to do a job on the right for the Q-Team, with such a shallow pool of eligible players. He joined Sheffield United as a trainee in 1994 and went on to establish himself in the Blades’ first team. A move to Bobby Robson’s Newcastle United in the early noughties proved a step too far, with injuries also preventing him from making the grade at St. James’ Park.

Centre-back: Barry Quinn
The second Quinn in the Q-Team made his debut for Coventry City in the 1998/99 Premier League season, making seven appearances during the campaign whilst still a teenager. He became a first-team regular at the start of the new century but the 2000/01 season saw Coventry drop out of the top flight, with Quinn playing in the side’s dramatic 3-2 loss to Aston Villa; a result that confirmed the Sky Blues’ relegation.

Centre-back: Rob Quinn
Another Quinn with a short Premier League career, Rob Quinn was in his early twenties when he lined up for Crystal Palace in the 1997/98 season. Like his namesake in the centre of the Q-Team defence, Quinn suffered relegation, with the Eagles finishing rock-bottom in a campaign that saw Attilio Lombardo briefly take over as player-manager at Selhurst Park. Quinn moved to Brentford shortly after for regular first-team football.

Left-back: Franck Queudrue
French defender Franck Queudrue arrived in England in the early noughties, playing for a Middlesbrough side that had started to establish themselves as a mid-table Premier League club. Queudrue won the League Cup during his time in the north east, winning the competition in 2004 as part of a defence that included England internationals Gareth Southgate, Ugo Ehiogu and Danny Mills. He also featured in the club’s thrilling run to the 2006 UEFA Cup final but went off with an injury in the side’s 4-0 defeat to Sevilla.

Right wing: Ricardo Quaresma
A hero for Portugal at Euro ’16, Ricardo Quaresma replaced the injured Cristiano Ronaldo in the final against France and helped his country to a historic win. The talented winger added the national honour to his collection of league titles from Portugal, Italy and Turkey. As for his time in England, he made his debut in Big Phil Scolari’s last game as Chelsea manager and departed a few games later after a short and forgettable loan spell

Name a player who people might have forgotten played for Chelsea.

Central midfield: Alan Quinn
Another Quinn and another Premier League relegation story. Alan Quinn made his debut for Sheffield Wednesday in the late nineties and became a first-team regular at Hillsborough in the 1999/2000 season, a campaign that ended with the Owls dropping out of the top flight. He impressed enough in the second tier to earn a call-up for the Irish national team, making his last appearance in green in 2007. He suffered Premier League relegation in the same year, this time with Sheffield United, as the Blades went down in a blaze of anger at the end of the 2006/07 season.

Central midfield: Nigel Quashie
Another relegation specialist in the Q-Team, Nigel Quashie went down with QPR in 1996, Nottingham Forest in 1999, Southampton in 2005 and West Bromwich Albion in 2006. The Scottish international has Carlos Tevez to thank for West Ham’s narrow escape in the 2006/07 season, with Quashie just about avoiding a third successive relegation. Fellow Qs Alan and Stephen Quinn went down with Sheffield United instead.

Remember when Alan Pardew thought he was better than Javier Mascherano?

Left wing: Stephen Quinn
Speaking of Stephen Quinn, the current Burton Albion player had a much more memorable spell at Bramall Lane than his older brother. He featured in the Blades’ final Premier League game of the 2006/07 season, as his side went down after David Unsworth’s winner for Wigan Athletic. Quinn remained with United in the Championship and even League One, before moving across Yorkshire to Hull City, where he once again played top-flight football.

Striker: Micky Quinn
Thankfully for the Q-Team, the Quinns aren’t all Premier League pariahs, with Micky Quinn’s time at Coventry City in the nascent years of the competition proving to be exhilarating rather than exasperating. However, Quinn did suffer relegation with Portsmouth in the old First Division. His goalscoring instincts couldn’t save the  south coast side, as they dropped out of the top flight in the 1987/88 season, along with Chelsea. Different times.

Striker: Niall Quinn
A hero for Manchester City and Sunderland in the Premier League, Niall Quinn spent the majority of his career in the top flight and was part of three tournament squads for the Republic of Ireland. Quinn’s little and large partnership with future golden oldie Kevin Phillips at the Stadium of Light was one of the stories of the 1999/2000 season as Sunderland finished in seventh place. Q-Team substitutes include Quinn’s former Manchester City team-mate Mike Quigley, Watford youngster Domingos Quina and Huddersfield Town’s Colin Quaner.