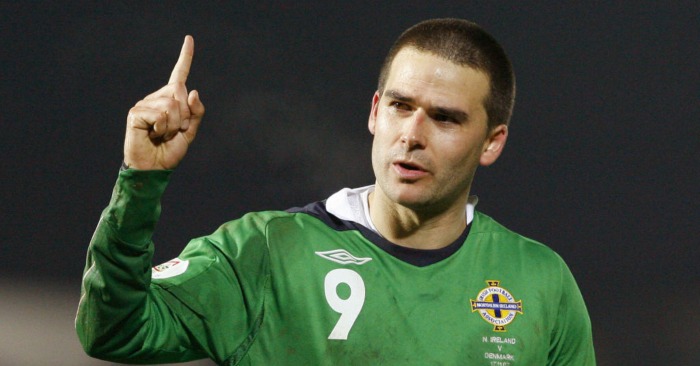 The Republic of Ireland team was a cracker; we have had to go ultra-defensive on the Northern Ireland XI to stand a chance against most opposition…

Goalkeeper: Maik Taylor
Taylor just about edges out Roy Carroll, who was still turning out for Linfield in his forties last season. With 180 Premier League appearances spread between three clubs, Taylor is best remembered for helping Birmingham City solidify their Premier League status after being part of Fulham’s rise from the third tier to the top flight. Like Shay Given in the Irish Premier League XI, Taylor lost his club number one spot to Joe Hart and saw out his playing days at Millwall.

Right-back: Chris Baird
Making his name at Southampton, with one of his first appearances being a losing effort in an FA Cup final against Arsenal in 2003, Chris Baird went on to play for Fulham and West Brom in the Premier League. With Fulham he was part of their astonishing run to the 2010 Europa League final, starring in the memorable 4-1 defeat of Italian giants Juventus on the way. Baird retired from international football after Euro 2016 with 79 caps to his name.

Centre-half: Alan McDonald
A member of the 1986 Northern Ireland World Cup squad, McDonald started all three group games in Mexico. In the same year he played in a League Cup final with QPR, all at the age of just 22. McDonald enjoyed a lengthy career with the London club, including their famous fifth-placed finish in the inaugural Premier League season. Tragically, he died in 2012.

Centre-half: Gareth McAuley
A famous late bloomer, McAuley didn’t make his national team debut until his was 25, yet he went on to play for his country for nearly 15 years, winning 80 caps. Despite not playing Premier League football until he was in his thirties, McAuley made 203 top-flight appearances, all for West Bromwich Albion.

Centre-half: Jonny Evans
Louis van Gaal may not have thought much of him at Manchester United, but Jonny Evans has certainly proven the charismatic Dutchman wrong as he continues to star in a Leicester City team outperforming most of the ‘Big Six’. Having made his international debut in 2006 whilst still a teenager, Belfast-born Evans remains on course to reach a century of caps for his country.

Jonny Evans has been a rock at the back for #lcfc this season ⛰️ pic.twitter.com/uqnN8leRX2

Left-back: Mal Donaghy
A member of the Northern Irish 1982 and 1986 World Cup squads, Donaghy was in the veteran stage of his career come the advent of the Premier League in 1992, yet he still managed 68 top-flight appearances for Chelsea after signing for them that year. He is most fondly remembered at Luton Town, spending a decade at the Bedfordshire based club and winning a League Cup with them in 1988.

Right wing: Keith Gillespie
Unavoidable comparisons with George Best were made when Keith Gillespie broke into the Manchester United team at just 17. Gillespie may not have hit those heights, but how many players have? Having been part of Kevin Keegan’s entertainers at Newcastle United, narrowly missing out on a Premier League title, Gillespie won some silverware as part of the League Cup-winning Blackburn Rovers team of 2002. Despite not reaching a major international tournament with Northern Ireland, Gillespie represented his country 86 times.

Central midfield: Steven Davis
Northern Ireland fans are happy to have Davis over Lampard and Gerrard, with the fortunes of the national team currently nowhere near as grey as they were when Davis made his debut back in 2005. The former Aston Villa, Fulham and Southampton midfielder is close to becoming Northern Ireland’s all-time record appearance holder; he’s only three caps away from taking over the legendary Pat Jennings. The current captain of his national side, he led his team at Euro 2016 and will hope to do the same at Euro 2021 if they can find a way through the play-offs.

Central midfield: Michael Hughes
Another player whose international career went by without qualification for a major tournament, making 71 appearances for his country in the nineties and early noughties. Hughes did at least enjoy some success at club level. The former Manchester City player won promotion to the Premier League with Crystal Palace in the 2004 play-offs, beating another of his former teams West Ham United in the final.

Left wing: Chris Brunt
Now 35, the West Bromwich Albion captain has slipped down the pecking order at the West Midlands side during their push for top-flight football this season. But Brunt’s legendary status at the club is cemented after instrumental roles in two successful promotions to the Premier League. West Brom enjoyed an eight-year spell at the top following their 2009/10 second-place finish in the Championship. Sadly, Brunt missed the chance to represent Northern Ireland at Euro 2016 because of injury.

Striker: David Healy
A man immortalised from the moment he scored the goal that beat in England in 2005, Healy is Northern Ireland’s record goalscorer with 36 goals. Despite only making 44 Premier League appearances in the Premier League, compared to Iain Dowie’s 175, Healy’s exploits for his country ensure his place in the team. The man with a face made for heading goals, Dowie will have to settle for a place on the bench here.

There are plenty of options for a manager – Dowie, Martin O’Neill, Lawrie Sanchez, Danny Wilson, Nigel Worthington. But it would be great to see what Brendan Rodgers could do with this side.