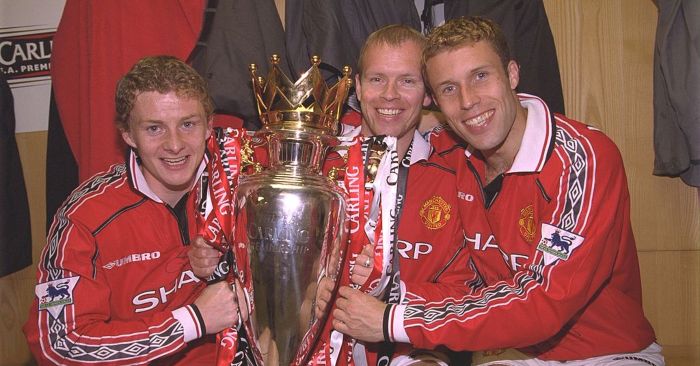 We’ve had the Danish XI, so let’s stay in Scandinavia with a Norway Premier League XI

Goalkeeper: Erik Thorstvedt
Only five Norwegian goalkeepers have played Premier League football. Make the most of your day at home and try thinking of the other four. Thorstvedt was the first of the quintet and one of the few foreign players in the league in the 1992/93 season. Part of the last Tottenham side to win the FA Cup, in a team that included Gary Lineker and Paul Gascoigne (yep, it’s been that long), he made 60 Premier League appearances for Spurs before having to retire in 1995 because of injury.

Right-back: Henning Berg
The first of his countrymen to win the Premier League after Blackburn Rovers triumphed in 1995, Henning Berg also went on to become the first player to win the competition at two separate clubs. He won the second medal as part of Manchester United’s Treble in 1999 before returning to Rovers to captain them to victory in the 2002 League Cup final. Not a bad second spell at a club, especially when others have had some entirely forgettable ones.

Centre-half: Ronny Johnsen
The second of three Norwegians in Manchester United’s famous 1999 team (no, the third isn’t Erik Nevland), Ronny Johnsen was a pivotal yet understated figure in the success of United at the time. Signed for just over £1million, not many would have expected Johnsen to adapt so easily to life in the Premier League, playing with assurance in the centre of defence and midfield. He suffered with consistent injuries later in his United career and departed to Aston Villa, where he helped them finish sixth in 2004.

Centre-half: Brede Hangeland
Hangeland was a man mountain for Fulham in the Premier League for seven seasons, helping the London to club to consistent mid-table finishes. Unfortunately it didn’t end well after he was told of his departure from the club by e-mail at the end of a season that involved Felix Magath having quirky quark ideas to heal Hangeland’s mounting injury problems. Despite winning over 90 caps for his country, he never went to a major international tournament; his debut in 2002 coincided with a downturn in Norway’s fortunes.

Left-back: Stig Inge Bjornebye
Bjornebye was the original Stig on these shores, a mainstay of Liverpool’s defence in the nineties. Originally signed by Graeme Souness, he was one of the less glamorous members of the famous ‘Spice Boys’ side that included Merseyside heroes Steve McManaman and Robbie Fowler. Bjornebye’s performances were rewarded with inclusion in the 1996/97 PFA Team of the Year and he was key part of the Norway side that shocked Brazil in the 1998 World Cup the following year.

Right-wing: Morten Gamst Pedersen
Pedersen will have to play on the right-wing for the Premier League Norway XI, allowing Jon Arne Riise to roam forward on the left. No doubt there will be some set-piece taking arguments between the two, especially as Pedersen is considered the Norwegian Beckham in his home country. Though not a consistent goalscorer, never getting into double figures in a Premier League season, Pedersen was capable of finding the net in spectacular fashion. Despite continued rumours of interest from bigger clubs, he remained loyal to Blackburn Rovers for nearly ten years, cementing his legendary status at Ewood Park.

Central midfield: Lars Bohinen
Best remembered as part of Nottingham Forest’s fantastic 1994/95 Premier League season, Bohinen’s short but successful stay at the City Ground is enough to get a spot in this midfield. Alongside Forest greats like Stan Collymore, Bryan Roy and Premier League golden oldie Stuart Pearce, he scored some memorable goals as the newly-promoted side shockingly thrashed Tottenham and Sheffield Wedndesday during an unbeaten 11-game run at the start of the season. Their undefeated streak came to an end against eventual champions Blackburn Rovers, the club Bohinen joined the following season.

Central midfield: Oyvind Leonhardsen
A Liverpool fan as a boy, Leonhardsen got his dream move to Anfield in 1997 after impressing in a Wimbledon side that continued to confound the critics at the time. Unfortunately for Leonhardsen, his Liverpool career didn’t last long due to Gerard Houllier’s appointment as sole Liverpool manager in late 1998. After returning to London, the industrious midfielder rediscovered some form for George Graham’s Spurs side and remained a fan favourite for Norway until his international retirement in 2003.

Left-wing: John Arne Riise
A team-mate of Hangeland at Fulham, John Arne Riise is better known on these shores as a member of Liverpool’s Champions League-winning side in 2005. There weren’t many finer sights in noughties era Premier League than a first time shot by Riise; the pure power, the thunderstruck goalkeepers and the sheepish defenders who didn’t want to risk their lives by getting in the way. Riise made more appearances in the Premier League than any other Norwegian, playing 321 times in the competition.

Striker: Ole Gunnar Solskjaer
He hasn’t mentioned it before, but Solskjaer did win the Treble at Manchester United in 1999. The enduring image of the baby-faced assassin is him poking in that winner against a shell-shocked Bayern Munich, turning around wide-eyed and recklessly sliding away on his knees. Of course, Solskjaer’s career was more than just that moment, with 91 goals in the Premier League, including four in one match after coming on as a substitute against Nottingham Forest. If he had left United’s bench and remained clear of injury, he would’ve surely reached well over 100.

Striker: John Carew
Norway has provided the Premier League with some memorable forwards over the years. Josh King currently holds the baton once carried by Solskjaer, Tore Andre Flo, John Carew, Steffen Iversen, Egil Ostenstad and Jan Age Fjortoft. Carew gets the second striker spot in this team, having scored 37 times for Aston Villa during his stay in England. Most famous for his La Liga-winning spell at Valencia, he came close to winning the Champions League there and was regularly the scourge of Arsenal in Europe. He almost won silverware at Aston Villa, too, with the club finishing runners-up to Manchester United in the 2010 League Cup final. More recently, Carew was seen cheering on Villa with Prince William in last season’s Championship play-off final, as West Midlands native Jack Grealish led them to promotion.