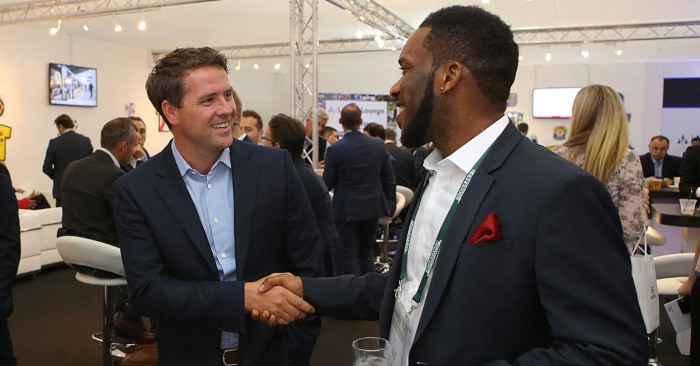 The A-Team and B-Team have already faced off; how will the O-Team fare?

Goalkeeper: Steve Ogrizovic
An FA Cup winner with Coventry City in 1987, the uncapped Ogrizovic spent 16 years with the West Midlands side. He spent his time in the Premier League battling relegation with the Sky Blues and put in a man-of-the-match performance on the last day of the 1996/97 season, as Coventry miraculously escaped the drop with a 2-1 win at White Hart Lane. Former Arsenal back-up David Ospina takes up a familiar position on the bench for the O-Team. If you fancy a goalkeeper challenge, try naming two O ‘keepers who share a surname.

Right-back: John O’Shea
Former Manchester United and Sunderland defender John O’Shea gets a starting spot on the right side of defence, with full-back options thin on the ground for the O-Team. He won five Premier League titles during his stint at Old Trafford and appeared over one hundred times for Ireland. Playing at right-back in the side will hopefully give O’Shea the chance to get forward and replicate his surprising, yet stunning goal against Arsenal in 2005.

Centre-back: Nicolas Otamendi
Manchester City defender Nicolas Otamendi takes the first centre-back slot in the O-Team, having won two Premier League titles since signing for City in 2015. The Argentinean international gets in the side ahead of former Aston Villa defender Alpay Ozalan, with the Turkish international impressing in England before clashes with Graham Taylor and the iconic David Beckham resulted in his contract being terminated.

Centre-back: David O’Leary
O’Leary was in the veteran stage of his career come the advent of the Premier League but appeared for Arsenal in the competition’s maiden season and for Leeds United in the 1993/94 campaign. The Irish legend spent nearly 20 years at Highbury, winning two league titles and two FA Cups. O’Leary’s fellow countryman Andy O’Brien takes a spot on the O-Team bench, having played for Bradford City, Newcastle United, Portsmouth and Bolton Wanderers in the top flight.

Right wing: Alex Oxlade-Chamberlain
Current Liverpool star Oxlade-Chamberlain starts on the right side of a packed O-Team midfield, with the future Premier League winner (?) now playing his ninth season of Premier League football. The former Arsenal player became one of England’s youngest ever debutants in 2012 and was part of the national team’s squad at the European Championships that year. Injury problems prevented him from taking part at the last two international tournaments but he looks certain to be part of Gareth Southgate’s plans for Euro 2021 if he stays fit.

Central midfield: Mesut Ozil
Oxlade-Chamberlain’s former team-mate at the Emirates starts for the O-Team, with Mesut Ozil no doubt insisting on being the side’s highest earner. The former German international became the first of his countrymen to register 50 assists in the Premier League, having joined Arsenal to great fanfare in 2013. Martin O’Neill will be hoping Ozil is at his creative best in the Alphabet League, with the O-Team facing some tough defences in the competition.

Central midfield: Oscar
A Premier League title-winner with Chelsea, Oscar left Stamford Bridge for the riches of China whilst in his mid-twenties. The transfer may have lined the Brazilian’s pockets but his national team chances have dwindled since his arrival in Shanghai, with the former Sao Paulo and Internacional player missing out the 2018 World Cup. He last played in a tournament for his country at the 2014 World Cup, where he grabbed a consolation goal in Brazil’s humiliating 7-1 defeat to Ozil’s Germany, as the home nation crashed out in the semi-finals.

Central midfield: Jay-Jay Okocha
There’s certainly no shortage of technical talent in the O-Team’s midfield. Nigerian hero Okocha spent his time in the Premier League entertaining Bolton Wanderers fans, becoming a cult hero at the Reebok Stadium after his exploits ensured survival for the club in the 2002/03 season. The following campaigns saw the Trotters achieve top-half finishes, as Okocha’s genius led Bolton to their best season since the fifties.

Throwback to when Jay-Jay Okocha made Oliver Kahn look like a fool. 🔥

This is absolutely brilliant! 👌

Left wing: Marc Overmars
Completing a cosmopolitan midfield, Dutch star Marc Overmars takes the left-wing spot in the O-Team. A Premier League and FA Cup with Arsenal in the 1997/98 season, Overmars was one of Arsene Wenger’s greatest ever signings. Everton’s late England debutant Leon Osman provides the back-up in midfield, alongside Gary O’Neil and Jamie O’Hara.

Striker: Michael Owen
Not many Alphabet League sides possess a Ballon d’Or winner but the O-Team can rely on the goalscoring instincts of 2001 champion Michael Owen…if he can stay fit of course. A hero for Liverpool in the late nineties and early noughties, he became famous around the globe after his exploits at the 1998 World Cup. Former Manchester United player Owen will be familiar with the O-Team’s stadium, with the side playing at Old Trafford. Back-up strikers include Champions League winner Divock Origi, Premier League winner Shinji Okazaki and transfer deadline-day loser Peter Odemwingie.