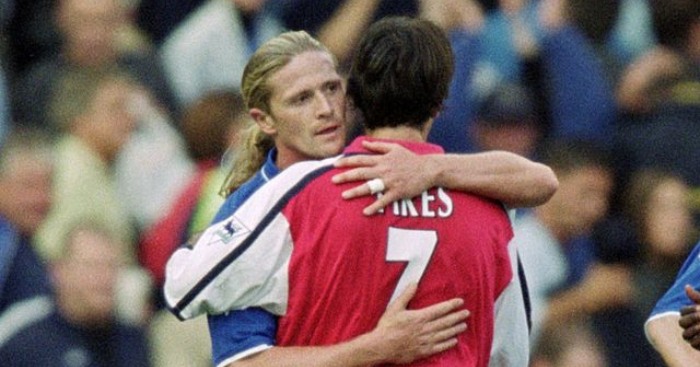 More from the Alphabet League; take a peek at the P-Team…

Goalkeeper: Rui Patricio
Wolves goalkeeper Rui Patricio takes the number one spot in the P-Team, with the European Championship winner seeing off competition from a host of P ‘keepers. The Portuguese stopper spent over a decade in the Primeira Liga with Sporting Lisbon before his Premier League arrival in 2018. England’s Jordan Pickford takes the back-up slot, with his national team-mate Nick Pope also in contention. Geordie star Pickford started his career at Sunderland – if you fancy a goalkeeper challenge, try naming three other P goalkeepers who played for the club in the Premier League.

Right-back: Dan Petrescu
Most famous for his spell at Chelsea, Romanian international Dan Petrescu spent five seasons at Stamford Bridge, playing under three different managers. He won the 1997 FA Cup, as influential Chelsea boss Ruud Gullit began to build a cosmopolitan side capable of competing in the Premier League and in Europe. England international and Premier League winner Paul Parker provides the competition at right-back.

Premier League – defenders with most assists:

Centre-back: Gerard Pique
Former United defender Gerard Pique didn’t make it as a first-team regular at Old Trafford like Pallister but he certainly showed his former employers what they were missing after he helped Barcelona to two Champions League final victories over the Red Devils in 2009 and 2011. Despite his short stay in England, the Spaniard does have a Premier League winner’s medal in his trophy cabinet, alongside a plethora of La Liga and Copa del Rey titles.

Left-back: Stuart Pearce
Golden oldie Stuart Pearce is the standout choice at left-back, with the Euro ’96 hero taking the number 3 shirt ahead of late England debutant Chris Powell. Pearce won’t be managing the P-Team but he can have a role as coach alongside Tony Pulis and Nigel Pearson…just imagine those training sessions. Alan Pardew and his best pal Manuel Pellegrini complete manager Mauricio Pochettino’s eclectic coaching staff.

Right wing: Morten Gamst Pedersen
One of the Premier League’s greatest ever Norwegian players, Morten Gamst Pedersen starts on the right for the P-Team. Arsenal ‘Invincible’ Ray Parlour gives the former Blackburn Rovers star some competition, having spent over a decade playing for the Gunners under legendary managers George Graham and Arsene Wenger. Manchester United misfit and Czech Republic’s Euro ’96 star Karel Poborsky is another option on the right, alongside current Chelsea player Pedro.

Defensive midfielder: Emmanuel Petit
Former Arsenal and Chelsea midfielder Emmanuel Petit gets the holding role in the P-Team, having won a Premier League and FA Cup double during his stay at Highbury. The 1998 World Cup winner takes the spot ahead of Scott Parker, with the ex-West Ham star having to settle for a place on the bench. Other options include Parker’s former team-mate John Paintsil, Stiliyan Petrov, Wilson Palacios, Gheorghe Popescu and Carlton Palmer; a man with the same number of England caps as Parker.

Attacking midfield: Paul Pogba
‘A P please POG’, ‘The POGdington Ps’, ‘POG Ps Pants’. The headlines write themselves for Paul Pobga in the P-Team but maybe Pochettino could at least convince Paul Pogba to play some football in the Alphabet League. Perhaps the former Spurs boss could light a fire inside the World Cup winner at Manchester United too…if newly-minted Newcastle can’t lure him to St. James’ Park first of course. There are no transfers or agents in Alphabet football, so there won’t be any talk from Mino Raiola over potential moves to the P-Teams of Serie A or La Liga.

Left wing: Robert Pires
Arsenal legend Robert Pires starts on the left for the P-Team, although there is plenty of competition for a place on the flanks. Current Gunners winger Nicolas Pepe has a long way to go to get anywhere near matching Pires’ success in north London, whilst Ji-Sung Park provides some defensive cover and everlasting energy on the wing if Pochettino needs it. Another former Arsenal player gets a place in the squad, with Lukas Podolski spending three years in the Premier League.