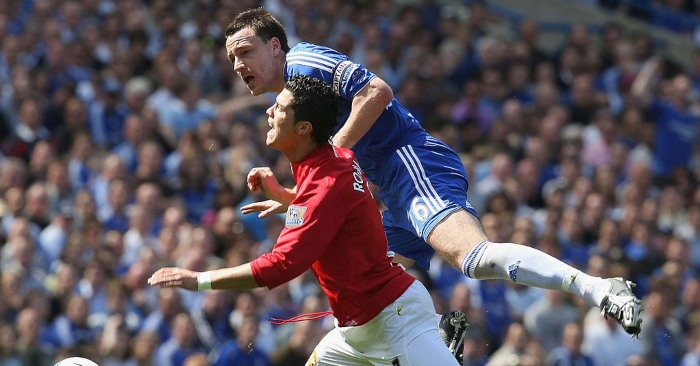 We remember happier times for Manchester United fans; here are the headliners from the 2007/08 season…

Goalkeeper: Scott Carson
Liverpool goalkeeper Scott Carson was loaned to Aston Villa for the duration of the 2007/08 season. Villa had a solid campaign under Martin O’Neill, finishing in sixth place, but Carson endured a nightmare at international level in November. England failed to qualify for Euro 2008 after a 3-2 defeat against Croatia, with Carson at fault. The defeat cost Steve McClaren his job as national team manager, just 16 months after taking the role.

Right-back: Micah Richards
Sven-Goran Eriksson, McClaren’s predecessor for England, took the manager’s job at Manchester City, with new owner Thaksin Shinawatra prepared to spend money at the club. City started well, with three wins from their first three games, including a 1-0 victory over rivals Manchester United. Micah Richards stole the headlines over the new signings, with the teenage defender winning the Premier League Player of the Month award for August. Richards was injured later in the season as City’s form dropped, culminating in a shocking 8-1 defeat to Middlesbrough on the last day of the season. Eriksson was sacked shortly after.

Centre-back: Claude Davis
Derby County purchased Sheffield United centre-back Claude Davis in a bid to shore up their defence, with the Championship play-off winners expected to struggle in the top flight. The season went terribly for player and club as Derby conceded 89 goals and only registered one victory. Their 11-point total remains the lowest in Premier League history, with the minus 69 goal difference also a record.

Centre-back: John Terry
Despite becoming Chelsea’s most successful manager of all time during his short stay at Stamford Bridge, Jose Mourinho left the club early in the 2007/08 season amid rumours of conflict with owner Roman Abramovich. Avram Grant took over and led the team to second place in the league with an impressive 85-point haul, just two short of eventual champions Manchester United. A League Cup final defeat to Tottenham was followed by another runners-up finish in the first all-English Champions League final. The game against the Red Devils went to a penalty shoot-out after the match ended 1-1, with captain John Terry missing the vital spot-kick that would have placed the trophy in his hands if converted.

John Terry arranged for himself to take the ‘match winning penalty’. He took the walk from the half way line to the penalty spot, straightening his captains armband just to remind everyone how important he was, took a run up, slipped and cried in the rain. Moscow, 21st May 2008. pic.twitter.com/AlmIOounl3

Left-back: Andre Bikey
Reading’s Andre Bikey scored two vital goals against relegation rivals Birmingham City in the March of ’08 to secure three precious points for the Royals. The win looked to have secured Reading’s Premier League status but a run of six games without a win put the side back into contention for the drop and they ended up slipping out of the top flight on goal difference. A record-breaking 7-4 defeat to Portsmouth earlier on the in the season didn’t help, with the game producing more goals than any other in Premier League history.

Right wing: Cristiano Ronaldo
Manchester United’s Portuguese sensation Cristiano Ronaldo had another incredible season, one that saw him win the Golden Boot with 31 Premier League goals. He also picked up the PFA and FWA Player of the Year awards as he inspired the Red Devils to another league title. He went on to score in the Champions League final, giving his side the lead in the match before Frank Lampard equalised. Penalties were required to determine a champion and Ronaldo saw his spot-kick saved by Petr Cech. John Terry’s miss let the United star off the hook, with Edwin Van der Sar beating away Nicolas Anelka’s penalty in sudden death to win the game.

Central midfield: Paul Scholes
After missing Manchester United’s unforgettable win in the 1999 Champions League final because of suspension, the overrated Paul Scholes made up for it in 2008. The Manchester-born midfielder scored with a beautifully hit strike against Spanish giants Barcelona in the semi-finals, the only goal of the two-legged tie. He started in the final against Chelsea, as the Red Devils won a third European Cup, 50 years after the Munich air crash tragically robbed the club of some its finest ever players.

Central midfield: Danny Murphy
Fulham signed former Liverpool midfielder Danny Murphy at the start of the 2007/08 season, with the England international scoring a crucial goal in their last game of the season against Portsmouth to keep his new side in the Premier League. Roy Hodgson took over at Craven Cottage during the Christmas period, with former boss Lawrie Sanchez unable to lift the side out of the relegation zone. Hodgson led them to four wins in the final five games of the campaign to keep the Cottagers up on goal difference.

Left wing: El-Hadji Diouf
After several seasons finishing in the top half of the Premier League, Bolton Wanderers faltered in the 2007/08 campaign as Sammy Lee struggled to replicate the success of former boss Sam Allardyce. Gary Megson took over in October and a tense relegation battle ended in survival after El Hadji Diouf’s goal against Sunderland helped secure their top-flight status. The ever-controversial Diouf announced he wouldn’t be staying at the club and went on to join Sunderland the following season.

Striker: Michael Owen
Allardyce didn’t prove too popular in his role as Newcastle United boss, lasting just half a season in the manager’s job at St. James’ Park. Fans on Tyneside were loving it when club legend Kevin Keegan took over, with the former England coach previously leading the Magpies in the nineties. Michael Owen scored the first goals of the second Keegan era, with an FA Cup strike against Stoke City and then in the league versus north-east rivals Middlesbrough. Fans hoped the combination of two former Ballon d’Or winners would help the club replicate the success of the previous decade.

Striker: Nwankwo Kanu
Portsmouth’s near 60-year-long drought ended with victory in the FA Cup final, with their last major trophy prior to 2008 the 1950 First Division title. Pompey defeated Championship side Cardiff City in the Wembley showpiece, with Kanu bagging the only goal of the game in a man-of-the-match performance. Portsmouth’s victory marked the first time the famous trophy had left the clutches of the ‘big four’ since Everton’s win in 1995, with Manchester United, Chelsea, Liverpool and Arsenal dominating the competition since.