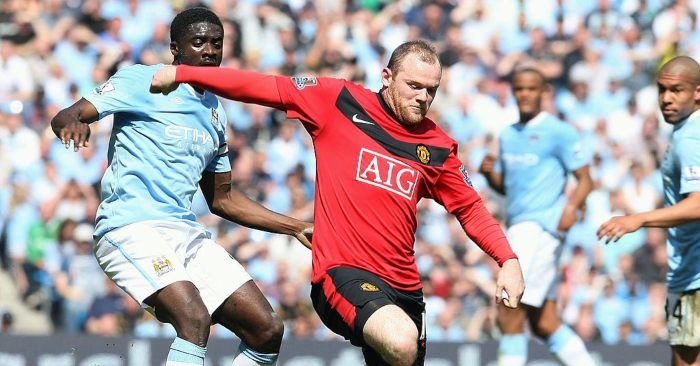 Goalkeeper: David James
Portsmouth finished bottom of the Premier League during the 2009/10 season, with financial problems resulting in the sales of key players. The club went into administration late into the campaign and received a nine-point penalty as a result. Goalkeeper David James remained with Pompey during the crisis and captained the side as they reached the FA Cup final. The veteran ‘keeper travelled to South Africa as part of England’s World Cup squad in the summer and took a place in the starting line-up after Rob Green’s calamitous error in the opening game against the United States.

Right-back: Graham Alexander
After winning promotion from the Championship, Burnley played in their first top-flight campaign since 1976 in the 2009/10 season. Graham Alexander became the oldest player to make his Premier League debut and his penalty-taking prowess helped the Clarets to some memorable results. Manager Owen Coyle angered Burnley fans by making the move to rivals Bolton Wanderers in the January of 2010 and the side’s poor form in the second half of the season led to an 18th-place finish and relegation back to the second tier.

Centre-back: Thomas Vermaelen
Arsenal’s Thomas Vermaelen had an excellent debut season in the Premier League, with his performances at the back helping the Gunners to third in the league and earning him a place in the PFA Team of the Year. However, the Belgian defender couldn’t handle the talents of Lionel Messi, with the Argentinean genius scoring four times against Arsenal in the Champions League quarter-finals to put Barcelona through to the semis 6-3 on aggregate.

Centre-back: Joleon Lescott
West-Midlands born defender Joleon Lescott made a big-money move from Everton to newly-minted Manchester City at the start of the season. The transfer represented a shift in power amongst the two sides, with the Toffees previously challenging for the top-four positions in the league whilst City toiled in mid-table or below. Carlos Tevez also arrived at the club amongst much billboard-related controversy, with the Argentinean previously playing at Manchester United.

Left-back: James Milner
Aston Villa continued their consistent Premier League form, finishing sixth for a third season in a row under Martin O’Neill. They went on good runs in the FA Cup and League Cup too, reaching the final of the latter. James Milner scored in the quarters, semis and the final but his early goal at Wembley wasn’t enough to keep the trophy out of Manchester United’s hands as Villa lost 2-1 to the Red Devils. Local rivals Birmingham City had a fine season in the Premier League too but Milner’s late penalty against them in April ensured Villa remained top dogs in the second city.

Central midfield: Alberto Aquilani
Xabi Alonso left Anfield for his native Spain in the summer of 2009 and was replaced at the club by Italian international Alberto Aquilani. It was a massive downgrade. Liverpool had a terrible season, with Aquilani barely fit to play and barely fit for purpose. Early exits in all the cup competitions and a seventh-place finish in the league led to Rafa Benitez’s departure at the end of the campaign.

LFC is full of them. You’re welcome.

Central midfield: Frank Lampard
Chelsea legend Frank Lampard was on top-form again in the 2009/10 campaign, scoring an impressive 22 league goals from midfield. The Blues won the Premier League title and the FA Cup in Carlo Ancelotti’s first season as manager. Lampard had far less to celebrate whilst playing for England at the 2010 World Cup, with his superb strike against Germany in the second round not being given, despite clearly crossing the line.

Central midfield: Zoltan Gera
Fulham finished safely in mid-table in the Premier League but the club’s fanstastic run to the 2010 Europa League Final made the 2009/10 season a memorable one for fans of the club. The Cottagers completed a stunning comeback against Italian giants Juventus in the round of 16, with Zoltan Gera scoring twice in a 4-1 win in the second leg after Fulham had lost the first-leg 3-1. The Hungarian international scored the winning goal in the semis too, with a 2-1 victory over Hamburg sending the London side into the final.  A narrow defeat to Atletico Madrid followed but it had been one hell of a journey.

Striker: Wayne Rooney
Manchester United missed out on a record fourth consecutive league title in the 2009/10 season, with the Red Devils lifting the League Cup as a consolation prize. Wayne Rooney scored the winning goal against Aston Villa in the final and went on to pick up the PFA Player of the Year award for his excellent performances throughout the season. The Merseyside-born forward bagged 26 league goals during the campaign, including the opener in United’s incredible 4-3 victory over noisy neighbours Manchester City.

Wayne Rooney was so sensational in 2009/2010 that Didier Drogba (who had more goals/won the PL) missed out on the PFA Fans’ POTY, PFA Players’ POTY, FWA POTY and PL POTS to the main man.

Striker: Didier Drogba
Rooney’s goal tally in the 2009/10 season was bettered by one man. Didier Drogba scored 29 goals in the Premier League, including a title-clinching hat-trick in an 8-0 win against Wigan Athletic on the last day of the campaign. The Ivorian proved himself to a man for the big occasions yet again in the FA Cup final, with his goal at Wembley enough to defeat relegated Portsmouth and secure a domestic double for his club.

Striker: Peter Crouch
Liverpool’s troubles in the 2009/10 season left a top-four spot open for another side, with Tottenham Hotspur and big-spending Manchester City the main candidates. The two teams faced off in May and Peter Crouch scored a late goal to give Spurs the coveted Champions League spot and send City into the Europe League. The London club’s fourth-place finish was their best Premier League performance up to that point, with the transformation from a Big Four to a Big Six starting to materialise.

On this day – In 2010, Peter Crouch scored the winner against Man City to send us into the Champions League. #THFC pic.twitter.com/NZPruzoALk