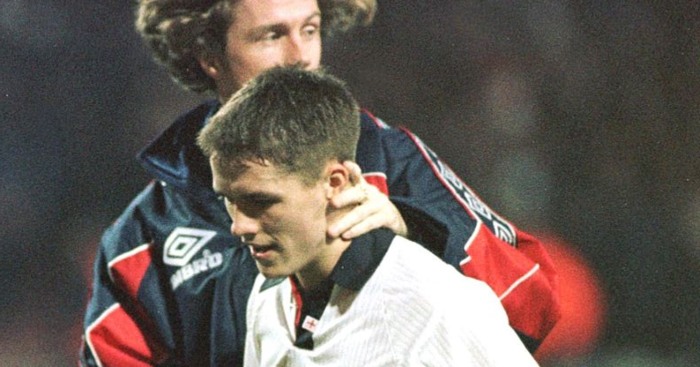 We’ve seen England’s Late Debutants XI, so let’s have a look at England’s Youngest Debutants XI. Who wins, the old boys or the kids?

Goalkeeper: Jack Butland
Butland beat a 124-year-old record to become England’s youngest ever goalkeeper in 2012 and was tipped to seriously challenge Joe Hart for the number one spot. Fast-forward to the current day and both players are out of the international reckoning, although Butland is at least still playing at club level and avoiding the trials and tribulations of a back-up goalkeeper. Still only 27, there may be time for him to improve on his nine international caps, although he may need to start playing Premier League football again. As a challenge, try naming the goalkeeper whose record Butland eclipsed.

Right-back: Micah Richards
Over a year younger than Trent Alexander-Arnold when he made his England debut, Micah Richards burst onto the international scene as an 18-year-old in 2006. He remembers it well, even if Irish legend Roy Keane doesn’t.

🗣️ Micah Richards: “I burst onto the scene”

🗣️ Roy Keane: “Did you burst onto the scene?”

🗣️ Micah Richards: “I played for England at 18, youngest ever defender to play for England. I would say that’s bursting onto the scene!”

Thrown into the deep end on his debut, he had to face off against Netherlands and Arjen Robben. Richards dealt with the Dutch threat admirably as England came away from Amsterdam with a 1-1 draw. Just over five years later, Richards’ international career came to an end against the same opponents, with Robben scoring twice as England lost at home. A succession of injuries had curtailed his development and by 2012 he found himself out of Manchester City’s plans as well as England’s. A move home to the West Midlands followed and despite some hope that Richards’ monumental potential could finally be realised at Aston Villa, his career never recovered.

Centre-half: Rio Ferdinand
Ferdinand made his England debut just a week after his 19th birthday, coming on as a substitute against Cameroon in June 1997. The game marked the beginning of a long international career that saw him end up in England’s top 15 most-capped players. Ferdinand gained recognition in an otherwise ageing West Ham defence in the late nineties that included veterans Neil Ruddock, Igor Stimac, Steve Potts, Julian Dicks and golden oldie Stuart Pearce. Along with midfielders Joe Cole, Frank Lampard and Michael Carrick, Ferdinand was part of a group of talented young English players coming through at Upton Park who would go on to win 277 caps between them.

Centre-half: Jonathan Woodgate
Woodgate ended his woefully undercapped England career with just eight appearances to his name. Those caps were spread out over the course of nine years, with persistent injuries and a group of London-born golden generation defenders hindering his international opportunities. He was called up in 1999 after playing just 33 times for a Leeds United side challenging for Champions League places; by the mid-noughties things hadn’t turned out as expected for player or club. Woodgate never went to a major international tournament with England, winning his last cap in the early days of Fabio Capello’s reign as manager.

Fred, an @england fan: “The best defender in the past 25 years is Jonathan Woodgate.” #ENG pic.twitter.com/XbFGTxmSpX

Left-back: Luke Shaw
Despite winning his first cap as an 18-year-old against Denmark in 2014, Manchester United defender Luke Shaw is yet to reach double figures for England as he approaches 25h birthday. Luckily for him, there’s not as much competition on the left side as there is on the right, where A-Team starter Trent Alexander-Arnold is battling for contention alongside Aaron Wan-Bissaka and Kieran Trippier. Other England international teenage defenders include Shaw’s United team-mate Phil Jones (27 caps), Glen Johnson and Greater Manchester duo Phil Neville and Wes Brown.

Right wing: Theo Walcott
It’s been nearly 14 years since Walcott first played for his country and it’s been over three years since his last cap. England fans experienced the shock of his World Cup squad inclusion in 2006, to the widespread belief that the latest next-big-thing would be England’s Thierry Henry, to the slow realisation that those expectations were never going to materialise.

Walcott’s breathtaking hat-trick against Croatia whilst still a teenager made the nation believe the era of a new superstar was imminent, but he went on to make just one tournament squad after that; it’s the hope that kills you. England’s youngest ever player was finished at international level by 27, with current manager Gareth Southgate playing him just three times before deciding to concentrate on the next next-big-things.

Central midfield: Alex Oxlade-Chamberlain
2012 was the year of the Ox, making his England debut as an 18-year-old against a Norway side that contained legendary figures like Jon Arne Riise, Brede Hangeland and Morten Gamst Pedersen. Oxlade-Chamberlain’s fearless, all-action approach helped him look at ease against seasoned veterans and he managed to reach the 13-cap mark before his 20th birthday. Injuries have prevented him making an impact at tournaments with England, but as part of a Liverpool side intent on breaking records, he looks set to play a key role for his country at Euro 2021.

Central midfield: Jack Wilshere
Another Arsenal youngster who made his England debut as a teenager, Jack Wilshere looks unlikely to improve on his 34 England caps. He won the first of those caps as an 18-year-old in 2010, with the nation hoping he could become the new Paul Gascoigne. Wilshere certainly had the talent to match the Geordie legend; unfortunately he had Gazza’s injury-prone streak too and took it a step further. He’s yet to make an appearance since Southgate took over from Roy Hodgson, his last appearance coming in England’s infamous defeat to Iceland at Euro 2016 . Dele Alli, Ross Barkley, Gareth Barry, Michael Carrick and Jermaine Jenas all made their England debuts at 19 years of age.

Left wing: Raheem Sterling
Both wingers in this side made their England debuts as 17-year-olds, with Sterling winning his first cap after just 20 first-team appearances for Liverpool. Now playing for Manchester City, he is approaching the 60-cap mark whilst still in his mid-twenties. Sterling and Walcott beat Callum Hudson-Odoi, Jadon Sancho and Marcus Rashford by a year to international recognition. Joe Cole, John Barnes, Lee Sharpe and Yorkshire’s Aaron Lennon were all 19-year-old debutants for England.

Striker: Wayne Rooney
He didn’t do too badly did he? England’s youngest ever starter went on to be England’s greatest ever goalscorer. The Merseyside legend ended his international career with 53 goals in 120 games, receiving a hero’s applause as he left the pitch during his final game in 2018.  However, Rooney’s international career isn’t without its disappointments. Critics will point to his poor record at World Cups and European Championships, as well as his impromptu rant at England’s travelling fans in South Africa.  Rooney’s excellent performance during his debut tournament in 2004 proved to be a catalyst for great expectations, with England fans waiting for him to fearlessly terrorise a defence again, willing him to deliver a knockout blow that they knew he was more than capable of.

Injuries, bad management, poor form, squad disharmony; there are mitigating factors as to why it never quite went as well as it could have gone for Rooney. Perhaps in time those shortcomings will be forgotten, but we’ll always remember the name.

Striker: Michael Owen
Younger football fans may see Owen as a seemingly emotionless and monotone punditry figure, but anyone old enough to remember the 1998 World Cup will have a very different image of the former Liverpool striker. Owen made his England debut against Chile in the February of 1998, but announced himself on the World stage that summer by scoring a wonder goal against another South American team. The 18-year-old became a national hero as England were knocked out of the World Cup by Argentina and then continued his good form at club level; he was Liverpool’s top scorer in their treble winning season of 2001 and won the Ballon d’Or that year too. Injuries caught up with him later in his career and diminished his frightening pace but he still won 89 caps for his country, scoring 40 times; many fans watching him as a teenager would have expected even more.