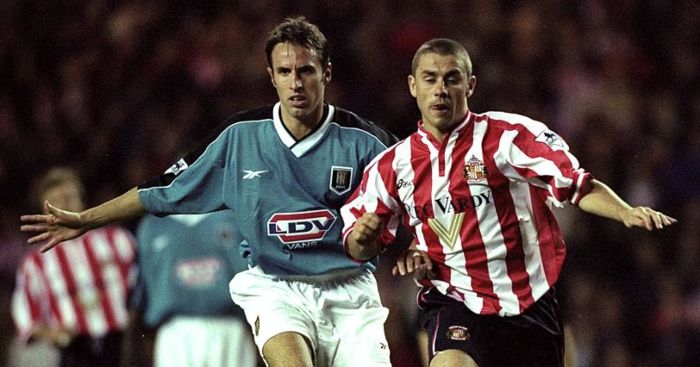 Another trip down memory lane leads to the new millennium; here are the headliners from the 1999/2000 Premier League season…

Goalkeeper: Mark Bosnich
Manchester United signed Mark Bosnich from Aston Villa in the summer of 1999 to replace Danish legend Peter Schmeichel, with the Australian keeper picking up a Premier League winner’s medal at Old Trafford. However, manager Alex Ferguson wasn’t convinced and purchased French World Cup star Fabien Barthez for the following campaign. Massimo Taibi made the headlines for all the wrong reasons whilst playing in goal for United during the season, with high-profile errors in a 3-3 draw against Southampton and a shocking 5-0 defeat to Chelsea.

Right-back: Rob Jones
Liverpool manager Gerard Houllier was keen to make his mark at Anfield, with Sami Hyypia, Stephane Henchoz, Emile Heskey and Dietmar Hamann all arriving at the club in the summer of ’99. Goalkeeper David James, Norwegian hero Oyvind Leonhardsen, Karl-Heinz Riedle and London-born star Paul Ince all departed, along with full-back Rob Jones. It was a sad ending for Jones in particular; having missed the whole of the 1998/99 campaign through injury, he was forced to look for a new club. West Ham gave him a chance but it soon became clear he couldn’t recover and one of England’s woefully undercapped players was forced to retire whilst still in his 20s.

Centre-back: David Wetherall
Bradford City’s maiden Premier League campaign looked set to end in relegation, as they went into the final game of the season in the drop zone. The Bantams needed a positive result against a Liverpool side chasing a Champions League qualifying spot. Former Leeds United defender David Wetherall scored the only goal of the game, heading past Sander Westerveld in the 12th minute to keep his side in the league at the expense of Wimbledon, with the Dons losing at Southampton. Wetherall’s goal also did his old side a favour, as Leeds pipped Liverpool to the all-important third place spot.

Centre-back: Jonathan Woodgate
That third-place spot was Leeds United’s best finish in the Premier League to date, with David O’Leary’s young side leading the pack midway through the season. Jonathan Woodgate, Alan Smith, Lee Bowyer, Danny Mills, Michael Bridges and Harry Kewell were all in their teens or early 20s at the time and it looked as if Leeds could potentially dominate at home and abroad with such a fine group coming through at Elland Road. However, Woodgate and Bowyer got involved in off-pitch shenanigans in January 2000, with a nasty incident outside a nightclub resulting in a legal case that eventually saw Woodgate convicted.

Left-back: Wayne Bridge
With Wimbledon only needing to match Bradford’s result on the last day of the season, a 0-0 draw against Southampton could’ve suited the London side. Up-and-coming Saints left-back Wayne Bridge had other ideas, scoring his first-ever goal with a beautifully hit free-kick. Wimbledon couldn’t find an equaliser and with Bradford winning against Liverpool, time was running out. Marian Pahars scored another late on for Southampton and Wimbeldon’s incredible 14-year stay in the top-flight was over.

Central midfield: Wim Jonk
Dutch international Wim Jonk was purchased by Sheffield Wednesday to add a touch of continental class to the Owls’ midfield and get the side back into the top half. The move didn’t go well, with Wednesday fans believing the veteran player to be a waste of money as performances on the pitch worsened in the 1999/2000 season. A dreadful start to the campaign saw the team win just once before Christmas, Jonk scoring in a 5-1 hammering of fellow strugglers Wimbledon. Wednesday’s form did pick up in the new year and Jonk netted again with a penalty in a surprise 1-0 win over Chelsea in mid-April to give fans hope of survival. However, three defeats followed and relegation was confirmed after a thrilling 3-3 draw with Arsenal in the penultimate game of the season. Twenty years later, Wednesday have yet to return to the top-flight.

Central midfield: Roy Keane
Not the type to ease off just because he’s won everything, Roy Keane continued to dominate games at the heart of Manchester United’s midfield even after a Treble-winning season the previous campaign. The Irish legend picked up the PFA and FWA Player of the Year awards as United won the Premier League title by an incredible 18 points over nearest challengers Arsenal. Keane set a marker early in the season by scoring both goals for the Red Devils in a 2-1 win against the Gunners at Highbury.

Central midfield: Dennis Wise
Chelsea’s cosmopolitan side continued to impress at home and abroad but long-standing captain Dennis Wise proved pivotal as he led the team to success in the FA Cup and to the Champions League quarter-finals. Wise was man of the match as Chelsea won 1-0 against Aston Villa in the last FA Cup final held at Wembley before the famous stadium was rebuilt. He also equalised against Italian giants AC Milan at the San Siro, proving that Chelsea could cut it amongst Europe’s elite in the club’s debut Champions League campaign.

Striker: Kevin Phillips
Kevin Phillips went on to become one of the Premier League’s golden oldies but back in 1999 he was only just making his name in the top-flight as a 26-year-old at newly-promoted Sunderland. The season couldn’t have gone much better as the side finished in a superb seventh place, with Phillips winning the European Golden Boot. His deadly partnership with Irish striker Niall Quinn made the headlines early in the season as Sunderland defeated local rivals Newcastle United 2-1 at St James’ Park, with the two strikers bagging a goal each.

Striker: Alan Shearer
Newcastle United’s star striker Alan Shearer didn’t start in that defeat, the Geordie legend dropped after falling out with manager Ruud Gullit. The Dutchman departed after the loss and former England boss Bobby Robson came in. Shearer was reinstated and immediately got the Magpies back on track, scoring five times in an 8-0 thumping of Sheffield Wednesday. Newcastle ended up safely in mid-table whilst Shearer finished second to Phillips in the goalscoring charts. Shearer continued his record-breaking career well into the new century but his England tenure ended on a sour note as he retired from international duty after a disastrous Euro 2000.

Striker: Thierry Henry
Arsenal lost out to Manchester United yet again in the race for the Premier League title in the 1999/2000 season and they finished as runners-up in the UEFA Cup final, too. However, they did make a game-changing signing in the summer of ’99, with H-Team star Thierry Henry arriving at Highbury as a replacement for fellow Frenchman Nicolas Anelka, who left for Real Madrid. Despite going on to become one of the most influential players in Premier League history, Henry didn’t instantly impress and only scored his first goal in Arsenal’s eighth match of the campaign. The second half of the season proved fruitful, though, with Henry endearing himself to the red half of north London by scoring the winner against Spurs in March. He finished the season as the club’s top scorer, with 17 goals in the league. There was a hell of a lot more to come.