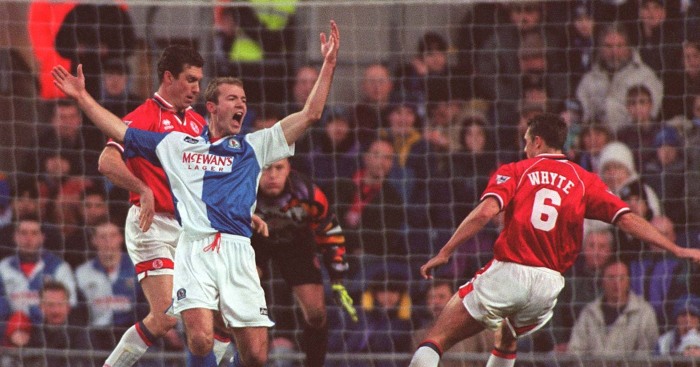 Goalkeeper: Ludek Miklosko
West Ham endured a difficult 1994/95 season, with club legend Billy Bonds leaving the manager’s post in pre-season before a start that saw the team score just two goals in their first seven games. By the March of ‘95 the Hammers were in big trouble and looked likely to go down, but a run of just one defeat in 11 meant they finished the campaign in 14th. On the last day of the season West Ham played a Manchester United side in contention for a third successive Premier League title. With Blackburn Rovers losing to Liverpool, the Red Devils needed a win to secure first place but Ludek Miklosko put in the performance of a lifetime to deny C-Team striker Andy Cole a dream end to his debut season at Manchester United. Miklosko’s heroics proved to be title-clinching for Blackburn Rovers as the Premier League trophy left Manchester for the first time.

Right-back: Pal Lydersen
Whilst fellow Norwegian international Henning Berg was becoming the first of his countryman to win a Premier League title in 1995, Pal Lydersen was getting released by Arsenal after failing to make an impact on the pitch for the north London club. However, Lydersen did make his mark off the pitch as his original transfer to Arsenal a few years earlier involved Gunners’ manager George Graham accepting illegal payments as part of the deal. The bung scandal rocked the sport and Arsenal sacked Graham, despite the success he had brought to Highbury. Danish midfielder John Jensen’s transfer to the club was also implicated in the scandal and he infamously scored the only goal of his Arsenal career during this season.

Centre-half: Richard Shaw
Crystal Palace defender Richard Shaw’s rough handling of Manchester United’s talisman Eric Cantona led to the Frenchman lashing out and receiving a red card from referee Alan Wilkie. Cantona’s subsequent kung-fu kick at a defamatory Palace fan who taunted him as he walked off the pitch resulted in a lengthy ban and doubts as to whether one of the best and first Premier League foreigners would play in the competition again (more on that in the 1995/96 Headliners XI). Shaw and Palace went on to became the unfortunate victims of the Premier League’s cull from 22 to 20 teams, meaning four teams were relegated at the end of the season. They were 3-0 to Newcastle on the final day needing a win to stay up, with Shaw culpable at the back. They then staged a dramatic comeback to make it 3-2, renewing their survival hopes. However, an equaliser didn’t materialise and they ended the season in the final relegation spot, despite gaining 45 points.

Centre-half: Steve Sedgley
Ipswich Town’s Steve Sedgley scored an 80th-minute winner in his side’s shock victory against reigning champions Manchester United in the September of 1994. However, when the two teams met again in March, United’s players were in the mood for some relentless revenge, with the match ending in a Premier League record 9-0 win. Ipswich only collected more four points after that match and ended the season in last place, with 93 goals conceded.

Left-back: Steve Staunton
Staunton scored Aston Villa’s only goal in a 1-1 draw with Norwich City in the last game of the season. The result ensured Villa ended the campaign one place above the relegation zone, whilst Norwich suffered relegation. The two sides had both finished in the top three only two seasons earlier. Despite winning the League Cup in 1994, Villa manager Ron Atkinson was ruthlessly sacked and replaced with club legend Brian Little. Little had been in charge of Leicester City and without him the Foxes ended the season in the relegation zone.

Right midfield: Andrei Kanchelskis
Kanchelskis continued his blistering form from the previous season by becoming the top scorer for Manchester United in the 1994/95 campaign. The highlight of the Russian’s season was a hat-trick in the 5-0 win against bitter rivals Manchester City and his talents became indispensable as they tried to move on unperturbed by Eric Cantona’s lengthy absence from the squad. Despite his importance to the team, Alex Ferguson shockingly sold Kanchelskis to Everton before the commencement of the following season; his departure coincided with the loss of Greater London-born Paul Ince and Welsh Wonder Mark Hughes. United fans were starting to wonder what was going on at Old Trafford.

Can you imagine what it would of been like had this Twitter been around when Sir Alex Ferguson sold Paul Ince, Kanchelskis & Mark Hughes in 1995.
The keyboard warriors would of been out in full force. He may not be every1s cup of tea but support your manager and support your club

Central midfield: Tim Sherwood
He might not have won an England cap until he was in his thirties, but Tim Sherwood did captain a Premier League title-wining side when he was 26. Sherwood’s role at the heart of Blackburn’s side was essential to the club’s successful season, especially as Yorkshire-born midfield general David Batty missed the majority of the season through injury. Sherwood scored a crucial winner against Chelsea in March and during the same weekend a resurgent Liverpool defeated Manchester United 2-0 to give Rovers the advantage going into the final few weeks of the season.

Left midfield: Paul Merson
Towards the end of 1994, Paul Merson went public concerning his addictions to alcohol, gambling and drugs. He subsequently attended a rehabilitation course at a residential clinic to try and overcome his problems. Merson’s admission was a watershed moment for football with club officials and managers realising a long-standing drinking culture needed to be eradicated from the game. Arsenal’s on-pitch performances did little to ease the pain of their off-pitch woes as they finished a lowly 12th place in the Premier League and lost in the Cup Winner’s Cup Final to Real Zaragoza. To rub salt in the wound, former Spurs player Nayim scored the winning goal in that final.

Forward: Stan Collymore
Nottingham Forest’s return to the Premier League in 1994 went better than anyone could have hoped for, with a third-place finish confounding the expectations of fans and pundits alike. Forest went unbeaten until late October and despite a mid-season wobble, they went on to make fools out of Sheffield Wednesday on the first of April, thrashing the Owls 7-1 at Hillsborough. Stan Collymore scored twice that day and was the team’s star player in that campaign, scoring 22 times and impressing enough to earn an England call-up at the end of the season, although he ended up woefully undercapped. He made a big-money move to Liverpool in the summer of 1995 as a long-term replacement for ageing club legend Ian Rush.

Forward: Robbie Fowler
Liverpool had ambitions of claiming a maiden Premier League title in the 1994/95 season after new manager Roy Evans had brought the team closer together following the departure of the outspoken Graeme Souness. Despite challenging near the top, they never looked like seriously challenging Blackburn or Manchester United and eventually finished fourth. Merseyside-born teenager Robbie Fowler was the star attraction of the time at Anfield, scoring 25 times and bagging a five-minute hat-trick versus Arsenal along the way. Fowler also won the PFA Young Player of the Year award and with the arrival of Stan Collymore in the off-season, the future seemed very bright for Liverpool in the mid-nineties.

95/96 Collymore was excellent. He and fowler were fantastic. Arguably first genuine strike partnership in PL era. Both goals and assists

Forward: Alan Shearer
Shearer led the scoring charts in the 1994/95 season with 34 goals and he also won the PFA Player of the Year award. The Geordie legend formed a lethal partnership with Chris Sutton, a player who big-spending Blackburn Rovers broke the national transfer record for at the start of the campaign. Shearer scored the opener for Blackburn in their final game of the season against Liverpool, with a win guaranteeing Rovers the title. A draw or loss would leave the door open for Manchester United to hold on to the trophy. John Barnes equalised before Jamie Redknapp scored a 90th-minute winner for Liverpool, but United could only draw in their game meaning a jubilant Blackburn won their first top flight title since 1914.