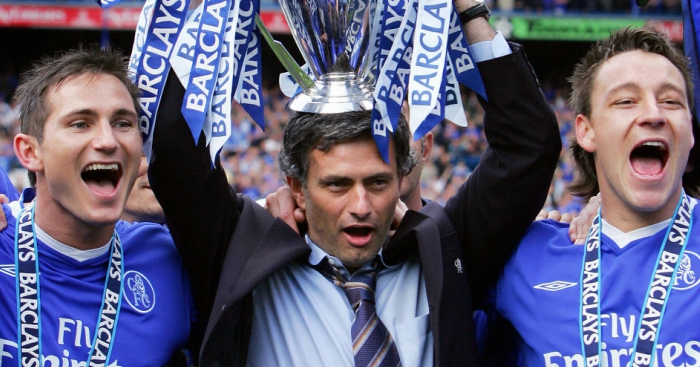 Goalkeeper: Mark Schwarzer
On the last day of the 2004/05 season, Middlesbrough goalkeeper Mark Schwarzer dramatically saved a penalty from Robbie Fowler in the dying moments of his side’s match against Manchester City. It proved to be crucial, with the 1-1 draw ensuring ‘Boro finished the campaign with the last UEFA Cup spot. If Fowler had converted his spot-kick, City would have taken the European spot instead. If the season had been abandoned after 29 games, the place would have been Charlton’s.

Right-back: Danny Higginbotham
Southampton’s season started terribly, with the Saints recording only two wins in the first half of the campaign. Former Portsmouth manager Harry Redknapp controversially took charge and inspired the side to victory over Liverpool, Spurs and relegation rivals Norwich City. Saints defender Danny Higginbotham scored a last-minute equaliser against Crystal Palace in the penultimate game of the season to give the team a chance of survival going into the final weekend. His goal put the Eagles in the relegation mix on the final day too.

Centre-back: Jonathan Fortune
Charlton Athletic defender Jonathan Fortune ended up being the player to sink Crystal Palace, with his goal against them eight minutes from time causing the match to end in a 2-2. The result meant West Bromwich Albion stayed up instead, the first team of the Premier League era to survive after sitting bottom of the table at Christmas. Southampton’s loss to Manchester United on the final day saw the Saints relegated alongside Palace and Norwich City.

Centre-back: John Terry
John Terry won the PFA Player of the Year award in the 2004/05 season, as he led his Chelsea side to a first Premier League title. Terry formed an excellent partnership with Portuguese star Ricardo Carvalho, who arrived at Stamford Bridge alongside goalkeeper Petr Cech. Chelsea’s defence performed admirably all season, conceding just 15 goals in the league and almost matching Arsenal’s ‘Invincibles’  from the previous campaign, losing just once. Terry also put in a man-of-the-match performance against Liverpool in the League Cup final, with Chelsea winning 3-2 after extra-time.

Left-back: Ashley Cole
One of Arsenal’s most important players in their incredible unbeaten 2003/04 season was left-back Ashley Cole. The London-born star was at the centre of a tapping-up controversy in 2005, with Chelsea accused of making an illegal approach for Cole. Come the end of the season, Cole and Chelsea were fined over the incident. On the pitch, Cole helped Arsenal to second place in the table and scored a penalty in Arsenal’s FA Cup final shootout victory against Manchester United after the match had ended 0-0.

Defensive midfield: Fernando Hierro
Real Madrid legend Fernando Hierro signed for Bolton Wanderers at the start of the 2004/05 season and became a key figure at the club during his only year in England. Hierro’s masterful performances helped the Trotters to their best top-flight campaign since the late fifties as Sam Allardyce’s men finished in sixth place and on the same points as Champions League winners Liverpool.

Central midfield: Kieron Dyer
Newcastle United sacked legendary manager Bobby Robson early in the 2004/05 season, with discontent in the dressing-room a factor in his dismissal. England international Kieron Dyer was one of the players accused of arguing with the former national team boss before a game against Middlesbrough. Dyer got involved in another heated exchange with team-mate Lee Bowyer during the campaign. Both players were sent off after fighting each other in the Magpies’ 3-0 loss to Aston Villa. The silly beggars.

Central midfield: Frank Lampard
Chelsea midfielder Frank Lampard won the FWA Player of the Year award in the 2004/05, with his 13 league goals helping the Blues to their first top-flight title in 50 years. Lampard netted twice against Bolton Wanderers in late April to clinch the title but suffered disappointment a few days later as Chelsea lost out to Liverpool in the Champions League semi-final, thanks to Luis Garcia’s ‘ghost goal’.

Central midfield: Steven Gerrard
Following Garcia’s decisive goal in the semis, Liverpool faced AC Milan in the 2005 Champions League final. Rafa Benitez’s side got off to a terrible start, with Italian immortal Paolo Maldini scoring in the first minute. By half-time the Reds were 3-0 down, with the match looking all but over as a contest. Liverpool captain Steven Gerrard reportedly gave a rousing speech during the interval, inspiring his team-mates to fight back in the second half. The Merseyside-born midfielder pulled a goal back to make it 3-1 and by the 60th minute Spanish maestro Xabi Alonso netted to tie the game at 3-3. Liverpool went on to win the match in a penalty shootout, with Gerrard deservedly picking up the man-of-the-match award after his heroic performance.

Striker: Adrian Mutu
Chelsea striker Adrian Mutu looked to be on his way out of Chelsea after becoming one of the first Premier League players to fall foul of Jose Mourinho’s brand of man-management. However, after only two league appearance in the 2004/05 season, Mutu tested positive for cocaine use and received a seven-month ban. Chelsea sacked the player, with Mourinho glad to see the back of the Romanian as he led the Blues to the Premier League title in his first season.

Striker: Wayne Rooney
Manchester United signed teenage sensation Wayne Rooney in the August of 2004, with the young England debutant scoring a hat-trick in his first game as United crushed Fenerbahce 6-2 in the Champions League. Rooney went on to score a late goal against Arsenal on his 19th birthday as the Red Devils spectacularly ended the Gunners’ unbeaten streak. His performances led to him being named as the PFA Young Player of the Year, as he helped United to third place in the league.