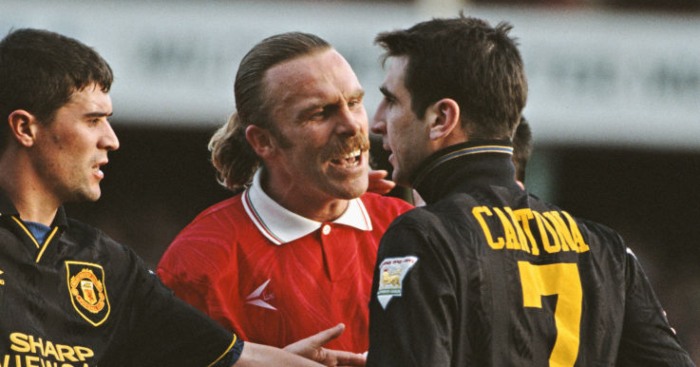 Goalkeeper: Tim Flowers
After spending big on Alan Shearer in the inaugural Premier League season, Blackburn Rovers broke another transfer record the following year by signing Tim Flowers from Southampton for £2.4m, an English record for a goalkeeper. Shearer had proved to be a fantastic buy as he helped Rovers to a fourth-place finish in 1993 and Flowers became another inspired purchase with Rovers finishing as runners-up and conceding fewer goals than champions Manchester United. The Ewood Park faithful were on the cusp of witnessing something unthinkable.

Right-back: Julian Darby
Blackburn’s excellent form in the 1993/94 season meant they still had a chance of claiming top spot in the Premier League going into May. They went into a Monday night game against the infuriatingly inconsistent Coventry City needing a good result to keep their title dreams alive. Greater Manchester-born Julian Darby proved to be a Manchester United hero that day, scoring both goals for Coventry in a 2-1. Darby’s title-clinching second goal meant it was the second successive year that United won the league on a day they didn’t actually play.

Centre-half: Steve Bruce
Bruce jointly lifted the Premier League title in May 1994 with departing club legend Bryan Robson after another fine season at the heart of Manchester United’s defence. The uncapped Bruce went on to captain Manchester United in the FA Cup final, with his side winning 4-0 to complete a historic league and cup double. He almost led them to a then unprecedented domestic treble, with the team losing out to Aston Villa in the 1994 League Cup final.

Meanwhile, the England national team were in disarray after missing out on qualification for the World Cup; Graham Taylor was sacked and Terry Venables came in. The new boss called up Arsenal defender Steve Bould – making him one of England’s oldest debutants – but Bruce still couldn’t get a game.

Centre-half: Ken Monkou
Dutch defender Monkou scored a dramatic 90th-minute winner as Southampton beat Norwich 5-4 in the highest-scoring game of the season, with the three points proving precious for a club battling relegation. Monkou almost went from hero to zero on the last day of the campaign, this time scoring an own goal in the final minute of a game against West Ham with the Saints needing a positive result to stay in the division.

Norwich 4 Southampton 5 .. we were down that season bottom at Easter if I remember correctly … I loved Ken Monkou forever

Left-back: Paul Bodin
Welsh defender Paul Bodin provided Swindon Town with some rare moments of cheer in the 1993/94 season. He was part of a side that conceded 100 goals in their first ever top-flight season, finishing bottom and recording just five wins all season. Bodin scored an impressive seven times in the season, including an equaliser at Highbury in a 1-1 draw with Arsenal, a result that all but ended the Gunners’ slim title hopes. Swindon had gained promotion from the play-offs the previous season, but lost manager Glenn Hoddle to Chelsea before they’d kicked a ball in the Premier League. Hoddle’s assistant John Gorman took over, but the side didn’t win a game until November and suffered some heavy defeats on the way.

Right midfield: Graham Stuart
Two-time First Division champions in the eighties, the nineties hadn’t started well for Everton. Still in relegation trouble on the last day of the 1993/94 season, they needed a win against Wimbledon to secure survival. The Dons had enjoyed a fantastic season, competing in the top half of the table, and took a 2-0 lead against the Toffees. Graham Stuart’s Everton career had just begun after signing from Chelsea and he became an instant hero at Goodison Park as he pulled one back with a penalty in the first half and went to score an 81st-minute winner to extend Everton’s 40-year spell in the top flight.

On this day in 1994 Everton complete a last day survival mission thanks to this famous Graeme Stuart winner against Wimbledon #Keepit90s pic.twitter.com/96ePbDR9Cg

Central midfield: Roy Keane
Manchester United broke the English transfer record (not for the last time) to sign young midfielder Roy Keane from Nottingham Forest. The £3.75m fee seemed a lot at the time but the future Irish legend immediately justified his fee by scoring twice on his home debut against Sheffield United. Keane formed a formidable midfield partnership with London-born Paul Ince and won a Premier League title in his first season at the club, just a year after he suffered relegation with Forest. Keane had been close to signing for big-spending Blackburn Rovers, where he would have lined-up alongside best pal Alan Shearer, who continued his impressive form by scoring 31 goals in the 1993/94 season.

Left midfield: Steve McManaman
Liverpool’s poor season in 1993/94 was summed up by local lad Steve McManaman and goalkeeper Bruce Grobbelaar coming to blows after the side conceded a goal against Merseyside rivals Everton. Liverpool legend Graeme Souness left his position as club manager mid-season (hopefully a ten-month-old Paul Pogba was taking note) after a difficult three-year stint in charge. Long-standing coach and former player Roy Evans took over, with the fans hoping he could mount a title challenge the following season. Grobbelaar would leave for Southampton at the end of the campaign, whilst McManaman and emerging teenage talent Robbie Fowler would become the key players in a new era at Anfield.

Bruce Grobbelaar wasn’t a fan of his defending from corners.pic.twitter.com/HK0zCus9v8

Attacking midfield: Matt Le Tissier
After being linked with a move away from Southampton, Matt Le Tissier’s two-goal heroics in a 3-3 draw with West Ham in the side’s final game of the 1993/94 season helped the Saints stay up by one point as Sheffield United’s four-year spell in the top flight came to an end instead. The woefully undercapped Le Tissier ended the season with a career-best 25 goals and credited his good form to England’s World Cup winning hero Alan Ball, who took the manager’s job at The Dell in early ’94.

Striker: Eric Cantona
After becoming the first Frenchman to win the Premier League the season before, Eric Cantona continued his good form and won the PFA Player of the Year award in 1994. His 18 league goals and 12 assists helped Manchester United to the title and he went on to score two goals in the FA Cup final as the club won its first ever double. But Cantona’s 80th-minute equaliser in the second round of the Champions League wasn’t enough for the Premier League champions to progress as they lost out to Galatasaray on away goals.

Striker: Andy Cole
On their return to the top flight in the 1993/94 season Newcastle scored an incredible 82 goals, the highest total in the division. Kevin Keegan’s side developed a reputation as an exciting attacking outfit and with several high-scoring wins the Premier League was introduced to one of its most entertaining teams of all time. C-Team striker Andy Cole topped the scoring charts with 34 goals and secured the PFA Young Player of the Year award. Cole was Arsenal’s one who got away and he showed the Gunners what they were missing, scoring in a 2-0 win against them on the final weekend of the season to ensure Newcastle finished in third, one place above his former side. His partnership with returning club legend Peter Beardsley also grabbed the headlines, with the Geordie hero scoring 21 times himself.

Five players in Premier League history would have won a Golden Boot and Playermaker Award in their career: