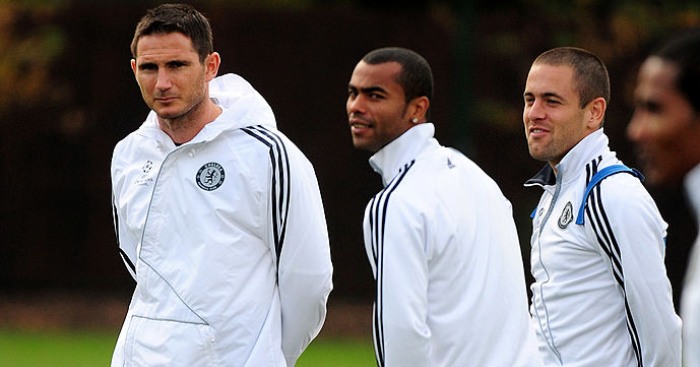 Goalkeeper: Dave Beasant
Dave Beasant’s England debut in the late eighties marked the first time a Londoner had stood between the sticks for his country since Peter Bonetti’s unfortunate Mexican nightmare in 1970. After Beasant won his two caps in 1989, he took an Italian sojourn in 1990 as England’s third-choice goalkeeper at the World Cup. No goalkeeper from Greater London has won a cap in the Premier League era; Rob Green is from Surrey, Ian Walker and David James are both from Hertfordshire.

Beasant was playing for Chelsea in the Premier League’s maiden season, but lost his place to the Russian Dmitri Kharine. He carried on playing top-flight football well into his late thirties, turning out for Southampton and Nottingham Forest. At Forest he had the misfortune to be on the end of an 8-1 defeat to Manchester United, a game that saw Norwegian legend Ole Gunnar Solskjaer score four goals after coming on as a substitute.

Right-back: Aaron-Wan Bissaka
England’s right-sided defence situation looks very healthy for at least the next decade. Not since Gary Neville and the undercapped Rob Jones were coming through in the early nineties have England had such a promising future in the position, with Wan-Bissaka and Merseyside’s Trent Alexander-Arnold looking likely to hold off the older duo of Kieran Trippier and Proper Yorkshireman Kyle Walker (who seems to have ruled himself out with his taste in pastimes proving unpalatable for Gareth Southgate).

Centre-back: Rio Ferdinand
There’s sure to be lots of banter in an all-London dressing room; Ferdinand would surely be getting up to some classic merks. Having made his name at West Ham, he spent the bulk of his career up north in Leeds and then Manchester, where he enjoyed incredible success at Old Trafford. Ferdinand returned home for a swansong in the capital at QPR, bringing six Premier League winners’ medals with him and then winning two Premier League games. At international level he won over 80 caps but was surprisingly only part of three England squads at major tournaments….his centre-back partner in this side may have something to do with that.

Centre-back: John Terry
Ferdinand and Terry don’t have to talk; Teddy Sheringham and Andy Cole won a treble whilst hating each other (brawled with team-mates XI anyone?). Despite all of the controversy that Terry courted in his career, there’s no doubting he was an exceptional defender and leader, basically a better version of Jamie Carragher. However, it might be more interesting to have Tony Adams or Sol Campbell in this side, just so Terry can run on the pitch from the bench in full Greater London pearly-king kit to lift the English Counties tournament trophy.

Carragher on John Terry: “Technically, he’s a lot better than he’s given credit for. People always talk about him being this man who put his head and his body in front of everything – and he would – and we talk about Rio Ferdinand being the player who was great on the ball.”

Left-back: Ashley Cole
A no-brainer for this position, but Cole does have some serious competition from left-backs who would walk into most other county sides; Premier League golden oldie Stuart Pearce, Kenny Sansom and Luke Shaw were all born in London. Cole was possibly the best left-back in Europe at his peak with an impressive trophy cabinet that befits his talent. An Invincible with Arsenal before his intemperate rage at the club’s wage offer saw him move across London to Chelsea. He won everything whilst at Stamford Bridge and was famously part of the side that beat Bayern Munich in the Champions League final of 2012.

Right wing: David Beckham
Despite being Tottenham’s one who got away, David Beckham never played for a London club. He first shot to fame in the capital though, scoring a goal from the half-way line whilst playing for Manchester United against Wimbledon at Selhurst Park in 1996. From that point the Beckham circus was in town to stay; he made his England debut the next month and was soon getting sent off in a World Cup, winning a treble, marrying a pop star and becoming a hero against Greece in 2002. After getting booted by Fergie, Beckham left for Real Madrid and the Galatico status fitted him like a sarong as he became one of the few footballers to transcend the sport.

Central midfield: Paul Ince
More than just a big-time Charlie, Paul Ince was the most consistent midfielder in the country during the early years of the Premier League. More than just a simple destroyer too, Ince could dominate a game and was the driving force in Manchester United’s title-winning 1992/93 season. Before joining United he drew the ire of Hammers fans by posing in the Red Devils’ kit whilst still a West Ham player. Later in his career he famously became one of the few men who braved playing for Liverpool and Manchester United. Perhaps he made some questionable decisions, but England could dearly use a Paul Ince in the national side right now.

Not the most popular figure at West Ham but Paul Ince’s goal at Villa in 1989 is brilliant #whufc @westhamfootball @WestHam_Central pic.twitter.com/Q8DpDjyOYg

Central midfield: Frank Lampard
What percentage of football fans wouldn’t pick Frank Lampard in a Greater London side? Another player who took a hammering from West Ham fans, Lampard beat the boo-boys at Upton Park by becoming Chelsea’s all-time leading goalscorer. He won three Premier League titles and four FA Cups, as well as captaining Chelsea (sorry John) to Champions League victory. One of only nine Englishmen to win over 100 caps, along with Greater London team-mates Ashley Cole and David Beckham, he was part of four England squads at major tournaments. To top it all off, he doesn’t have to play with Steven Gerrard in this team.

Left midfield: Joe Cole
Just like the defensive options for this team, the Greater London side has a bounty of midfield talent at its disposal. Ray Parlour, Paul Merson, David Rocastle, Scott Parker, Ray Wilkins,  Shaun Wright-Phillips, Theo Walcott, Dennis Wise…they all miss out.  Joe Cole makes the midfield three-quarters golden generation, having been part of every England tournament squad from 2002 to 2010. Despite a disappointing end to his career that included an entirely forgettable return to West Ham, Cole was a special talent at his peak. He won three Premier Leagues at Chelsea and along with William Gallas, scored a title-clinching goal against runners-up Manchester United in 2006.

Striker: Harry Kane
He could well have to leave his hometown club to win trophies, but there’s no doubting Harry Kane has already enjoyed a fine career with Tottenham and England. Still only 26, he is already in 13th place on the all-time Premier League goalscorer list and in sixth place on the all-time England goalscorer list. To top either of those he’ll have to overtake Premier League title winners.

Striker: Ian Wright
Wright seems like the ideal partner to Kane in attack, but there are other incredible players who could take the Greater London forward line spots – the evergreen talents of Teddy Sheringham, Jermain Defoe and the much-loved Les Ferdinand; take your pick. And this is all without Jadon Sancho, who will no doubt soon be eligible for Greater London Premier League XI selection.