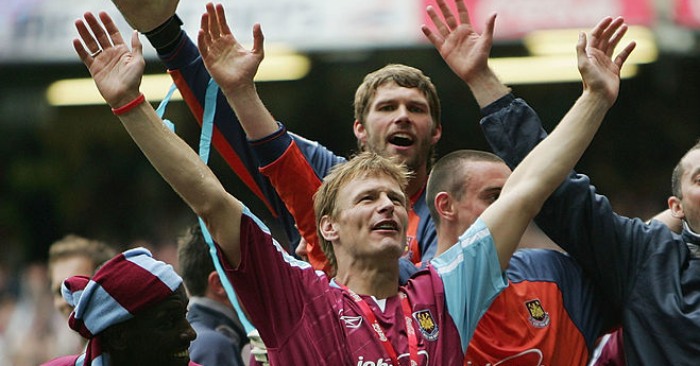 By now, we should have watched a Championship team celebrate wildly in the Wembley sunshine after winning promotion to the top flight through the play-offs. Instead, here’s an XI made up of Premier League greats who experienced a play-off final victory…

Goalkeeper: Ben Foster
Current Watford ‘keeper Ben Foster was on loan at Vicarage Road during the 2005/06 season and helped the Hornets to promotion through the play-offs at the end of the campaign. Foster kept a clean sheet as Watford won 3-0 at the Millennium Stadium against Leeds United. Other England international goalkeepers to have won the play-offs include Rob Green, Richard Wright and John Ruddy as well as the undercapped Matt Murray. If you fancy a goalkeeper challenge, try naming the ‘keeper who won the play-offs with Birmingham City and Crystal Palace.

Right-back: Denis Irwin
Premier League golden oldie Denis Irwin won promotion with Wolves in the 2003 play-offs, helping his side to victory over Sheffield United in the final. The Irish legend spent one more season at Molineux before retiring in 2004. Other right-backs to have won the play-offs include Danny Simpson, Danny Mills and Seamus Coleman; Irwin’s fellow countryman went up whilst on loan at Blackpool in 2010.

Another day & another birthday for a member of the squad from the play-off winning season.Many happy returns to Denis Irwin! A boyhood Wolves fan whose first season at the club ended in promotion.Denis made 85 appearances in 2 years at the club at the end of an illustrious career pic.twitter.com/Tp7guElb6J

Centre-back: Gary Pallister
Before making his big move to Manchester United in 1989, Gary Pallister was part of a play-off winning side at Middlesbrough in ‘88. The format was different back then, with Second Division ‘Boro facing off against top-flight Chelsea. The Blues had finished 18th in the old First Division and had to see off second-tier Blackburn Rovers in the semi-finals before facing Middlesbrough in the final. The north-east side won the two-legged tie 2-1 on aggregate to go up and relegate Chelsea at the same time.

Centre-back: Harry Maguire
Current Manchester United captain Harry Maguire was only on the bench four years ago, as one of Hull City’s substitutes in their 1-0 win over Sheffield Wednesday. Other famous defenders eligible for the side include Maguire’s team-mate at Hull, Michael Dawson, as well as Kevin Moran, Richard Dunne, Aaron Hughes, Colin Hendry and West Midlands-born Joleon Lescott.

Left-back: Andrew Robertson
Liverpool’s Champions League-winning left-back was another member of Hull’s victorious side in the 2016 Championship play-off final. The Scottish defender spent one more season with the Tigers before making the move to Anfield. Other left-backs to have won the play-offs include Swedish international Martin Olsson, Alan Wright and late England debutant Chris Powell.

Throwback to 2014-17 when Harry Maguire and Andy Robertson were Hull City teammates 👀 pic.twitter.com/C3FhbsBfg3

Right wing: Rob Lee
Way back in 1986/87 season – the first campaign the play-off system was implemented – Charlton Athletic finished 19th in the old First Division. The Addicks had to beat second-tier Leeds United to maintain their top-flight status, after seeing off Ipswich Town in the semi-finals. A 21-year old Rob Lee played as Charlton triumphed 2-1 in a replay in Birmingham after the original two-legged final ended 1-1 on aggregate.

Central midfield: Glenn Hoddle
One of England’s finest ever midfielders, Glenn Hoddle won the First Division play-off final with Swindon Town in 1993. The Spurs legend was player-manager at the County Ground at the time and started himself in the all-important match against Leicester City. The game went down as one of the classic play-off finals, with the Robins winning a thrilling encounter 4-3. Hoddle scored the opening goal at Wembley to send Swindon on their way to a first ever top-flight campaign.

Central midfield: Paul Ince
Another member of the 2002/03 Wolverhampton Wanderers side, Paul Ince captained the team as they ran out 3-0 winners in the play-off final that season. Other midfielders who could feature for this side include Aston Villa pair Jack Grealish and John McGinn, as well as Matt Holland, Kevin Nolan, Mark Noble, Aaron Mooy, Neil Lennon and the ever-popular Joey Barton.

Left wing: Wilfried Zaha
Crystal Palace’s star man Wilfried Zaha won the play-offs with the club in 2013, with the Eagles going up at the expense of Watford. Zaha won the promotion-winning penalty for his side in the final and picked up the man-of-the-match award for his performance. Ashley Young, Nathan Redmond, Ryan Sessegnon, Matthew Etherington and Yorkshire-born Nick Barmby all won the play-offs too.

Striker: Ian Wright
Three years before Zaha was even born, Ian Wright sent the Eagles flying into the top flight with his brilliant performance in the second leg of the 1989 Second Division play-off final. The London-born striker’s winning goal in extra-time completed a remarkable turnaround for Palace, who battled back from a 3-1 defeat to Blackburn Rovers in the first leg to win the second game 3-0.

On this day 30 years ago Crystal Palace were celebrating promotion after beating Blackburn Rovers 3-0 (4-3 on aggregate) at Selhurst Park in a dramatic second leg of the Second Division play-off final.#CPFC #Rovers #OnThisDay @IanWright0 pic.twitter.com/ZnpDJYFacR

Striker: Teddy Sheringham
Wright was just about to start his top-flight spell when he won the play-offs but fellow England international Teddy Sheringham was coming to the end of his successful career when he won promotion with West Ham in 2005. Bobby Zamora netted to send the Hammers up that year and he went on to score another promotion-winning goal in 2015, with his late strike sending QPR back to the Premier League. Other strikers who could feature include Mark Bright, Andrew Johnson, Kevin Phillips, Tammy Abraham and Emile Heskey.