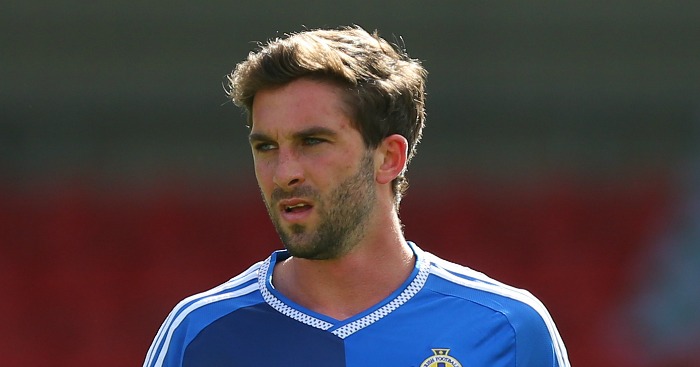 Wigan striker Will Grigg has returned to the Northern Ireland squad for their final friendly before they name their 23-man Euro 2016 squad in 10 days’ time. Altogether now, Will Grigg’s on fire and all that sh*t.

The in-form 24-year-old has been recalled by Michael O’Neill for next Friday’s game with Belarus having been omitted from the last squad that faced Wales and Slovenia in the March friendlies so he could concentrate on Latics’ promotion push.

Chris Baird and Corry Evans, who were injured two months ago, have also been named in O’Neill’s 28-man group while QPR striker Conor Washington and Peterborough defender Michael Smith are included once more after making their international bows during the last round of friendlies.

Defender Aaron Hughes, 36, will make his 99th international appearance should he feature against Belarus and has the chance to bring up his century in Slovakia on June 4.

O’Neill has few dilemmas to mull over in cutting five players from this squad for his country’s first international tournament in 30 years, though the identity of his forwards may have occupied much of his thinking.

Kyle Lafferty and Jamie Ward, fit again after a hamstring injury, are certainties while Washington may have sealed his place after scoring in a win over Slovenia that extended Northern Ireland’s unbeaten run to a record 10 matches.

That leaves Grigg, Josh Magennis, Liam Boyce and Billy McKay, another on Wigan’s books who spent the campaign on loan at relegated Dundee United, all hoping to join them at the team’s French base in Lyon, and all four are part of the extended squad to face Belarus.

Grigg was left out in March as O’Neill felt it was more beneficial to keep him with Latics and he has scored 10 times in the nine games since, taking the League One golden boot with 25 goals and earning a third successive promotion out of the division.

O’Neill’s final decision over his forwards may have been affected by his preferred formation, having moved between a 3-5-2 and 4-3-3 in recent fixtures.

“We will use the Belarus game to look at our options, our systems and how we play,” O’Neill said.

“It’s also a chance to look at personnel and to give players opportunities.

“We are on a good run at the minute and we want to continue that run. It is important that we approach the match in the same way as we have approached all our other games since qualification.

“In those we are unbeaten. We have won two and drawn one. We have only conceded one goal and that was from a penalty. Those are little things that build confidence and momentum going into a tournament.

“The Belarus and Slovakia games will both be very important. I think that they will both be good tests for us, particularly the game away in Slovakia.

“They are what we need because when we come to the tournament we are going to have to reach very high levels, possibly levels that we have never reached before.”

Neither Dundee United’s Paul Paton or Luton’s Paddy McCourt have been included while West Brom’s Chris Brunt will miss the Euros with a knee injury.