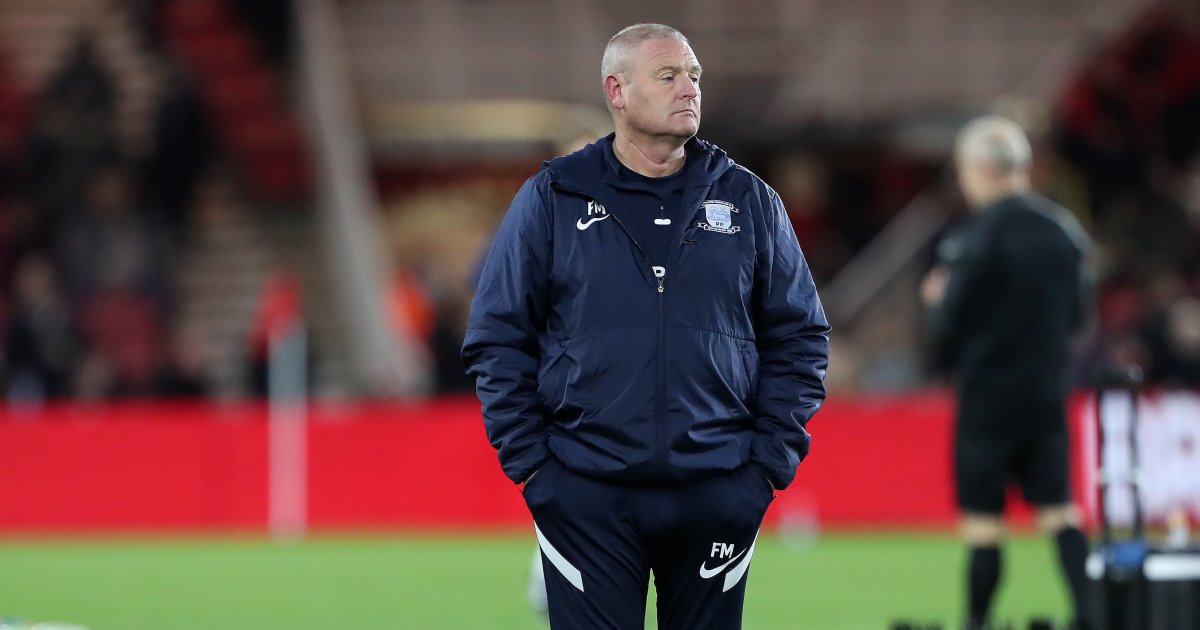 Preston North End’s appointment of Frankie McAvoy on a permanent basis had always seemed destined to end in failure. Perhaps typically of his brief time in charge at Deepdale, it has ended with a whimper rather than a bang.

McAvoy’s dismissal from mid-table Preston comes with North End an equidistant nine points from the play-off places and the bottom three. An appointment which was made following a successful interim stint at the end of last season has seen Preston progress no further under his permanent stewardship.

With neither a push at promotion nor a serious relegation battle on the cards, Preston’s 1-0 defeat to local rivals Blackburn was the final nail in a coffin already built when this appointment emerged from what should only ever have been an eight-game temporary stewardship. Twenty of his 23 Championship contemporaries were younger than the 54-year-old with no prior first-team management experience.

McAvoy was very much the epitome of an ideal caretaker manager, five wins from eight outings after Alex Neil’s stint had gone bitter makes a strong argument. Almost everything that has happened this season has been evidence that handing McAvoy the full-time reins was a mistake.

If anything, fewer points on the board might have had McAvoy in a safer position and still employed by the Lilywhites. Unlike most managerial changes in the Championship this season, Preston come not from a position of fear over their second-tier status, but in resting assured that they are a safe Championship side.

Preston and McAvoy have pulled up few trees this campaign, to the point where they have featured so little in our bi-weekly Championship Winners and Losers that casual bystanders could almost have forgotten about the Deepdale outfit.

A club that has long made the most of having a team greater than the sum of its parts tried to go down the same route with the manager; in essence, it was a cheap appointment. It was also an appointment which has led to much apathy amongst the North End fanbase in recent months.

Worryingly for the decision-makers at the club, while the mood towards McAvoy’s departure is one of relief, there is widespread understanding that he was not the man to blame. That he was not suited to the head coach role on anything beyond a short-term basis was patently obvious to even casual observers of Preston through even the rare good times.

By making this decision now, with the January transfer window on the horizon and half a season with little pressure on the next man into the hot seat, it sets the wheels in motion for what could be a much more successful 2022/23 campaign.

That his last three fixtures in charge went from win to draw to loss perhaps best summed up Preston’s fortunes under McAvoy’s tutelage. A club statement opined that Preston had ‘struggled for consistency’. One would dare argue that a consistent malaise had taken over the club on and off the pitch. If Preston won one game, you could be fairly certain they wouldn’t win their next. In that way, they were incredibly consistent.

If the Premier League has seen clubs finally sit up and take notice to appoint super managers who are a vast improvement on their predecessors, then it should not be difficult for Preston to follow suit. Not every managerial appointment has to be a big name or a great story, but they should not be 54-year-olds with no experience in the job.

That it has ended so quickly and without any surprise is testament to just how poor a decision this was in the first place. The people who made those decisions are still at the club, and will now be making the difficult choice over who should take the reins for the rest of this season and beyond.

It was better to realise the mistake now than to carry on in the name of saving face and coming to this inevitable decision further down the line. By taking swifter action than they did with Neil, there is the chance that excitement can be on the horizon once more for North End, who have stood still for far too long now.

Whether fans and everyone connected to Preston can get excited rests heavily on the next man through the door. There are a number of League One high fliers – Wycombe, Rotherham, Plymouth and others – who will be mindful of any impending approaches, but there are the usual names out of work too who might fit the budgets better at Deepdale rather than having to pay out compensation.

Despite failing at Ipswich, Paul Cook could benefit from working as an underdog once more like his best spells with Accrington, Chesterfield and Wigan, while Ryan Lowe could be tempted by the prospect of Championship football as his Argyle side have suffered three defeats on the bounce.

Whoever is the next man up at Preston will have a job on their hands to reinvigorate a squad which all too regularly resembles one of the cheapest assembled at this level, while getting the fans invested with watchable football after too many years of standing idly by watching the world go past.

For McAvoy, it was a sojourn into first-team management which will likely never be repeated. There was a reason why, despite decades of coaching, he had never stepped into the number one role. This spell has been the biggest indicator as to why. The ideal caretaker was never the right man for the job long term. Preston now have all the time in the world to make the next decision the best they have in years. If they continue to stand still, it won’t be long before they fall backwards again.