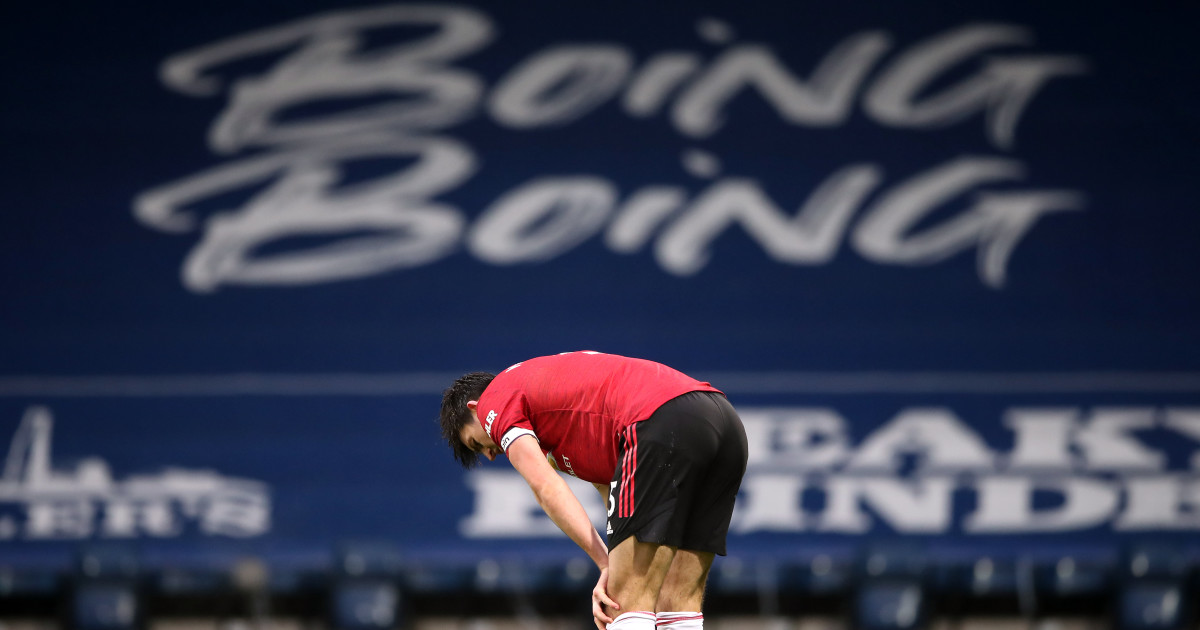 Harry Maguire had a very odd day on Sunday, forgetting all his football training and then also his media training. He was a bit of a prick, to be honest.

What’s he done?
Manchester United had a very odd afternoon on Sunday. Started off in typical fashion, with them falling behind away from home against shoddy opposition. Then Bruno Fernandes equalises – so far, so standard. Weirdly, though, Manchester United then failed to find a winner. Could even have lost. United, with the best away record in the league, had to settle for a point at West Brom, with the worst home record.

Harry Maguire, significantly involved for good or ill in pretty much all the game’s key moments, then went a bit off-piste after the game.

Let’s look in game first. Out of position for West Brom’s early opener, although less at fault than Victor Lindelof (this becomes important later). Then United’s best attacking outlet for much of a leaden first half with his trademark forward forays down the left. Sure enough, heavily involved in the equaliser just before the break.

Then the key moment for everything else. The penalty that wasn’t. A weird old thing all round this, because it was a very soft penalty to give, but then a slightly iffy one to overturn, and yet also demonstrably offside which should’ve rendered the whole thing moot yet which nobody seemed to care about.

Maguire also then got embarrassed Lindelof-style by West Brom scorer Diagne and was only spared by the twin safety nets of David de Gea’s save and a near-certain referee’s whistle had a ‘goal’ been scored.

He then almost scored a last-gasp winner with a header. He had an eventful game, is what we’re saying here. Then he had to do the post-match. And that’s where things started to really go awry.

It’s a game of opinions, and we’re very much on the record as saying that we don’t want players to just give bland vanilla interviews all the time and that therefore we shouldn’t get cross with them or call them pricks for offering up genuine opinions even if those opinions are a bit off-kilter, but Maguire went unusually rogue even in the midst of his understandable instant disappointment.

“I was so certain it was a penalty. I don’t understand why he’s been sent to check it,” he lamented.

“I’m goalside of the defender, I feel a touch on my shoulder, he’s pulling me back, and then I feel a clip on my heels as well. It was minimal, but it’s a penalty, especially after the referee points to the spot you think there’s no chance it’s getting overturned.

“I was so confident it was going to be given, but it seems like the decisions at the moment are going against us. We can’t be relying on VAR though, we huffed and puffed and have to improve.”

Now there’s lots here. The first – and in Maguire’s slight defence it is very weird that the interviewer didn’t bring this up as he himself may not have been aware of it so soon after the match had finished – is that he’s right about being goalside of the defender. Problem is he was goalside of all the defenders. But still, he can’t really have been that certain that was definitely an absolute penalty? Surely not. And even if he was, I’d not want to be setting that precedent for what constitutes a clear and obvious definite foul if I were a capable yet sometimes cumbersome centre-back who had just been conspicuously caught out of position a few times by West Brom. The next time Maguire is involved in that kind of incident there’s a better than even chance the roles are reversed.

There must also surely be an unwritten rule that absolutely no Manchester United player is ever allowed to lament “decisions going against us”. We get enough Penandes emails as it is.

Perhaps the best part of this, though, is like a desperate last-ditch tackle, that training all kicks in right at the end in the final sentence. Too late, Harry. Like so many of your decisions on Sunday, too late.

At this point, though, it’s probably still barely a dishonourable mention. Definitely not full prick.

Then, though, Maguire goes on MUTV. He doubles down and then some. He rails against any criticism of Victor Lindelof because “it’s a foul” before embarking on a genuinely quite bizarre rant about United never getting any decisions. To come up with anything that sounds outlandishly tinfoil-hattish by the standards of 2021 is quite something. We’ve already talked about how the overestimation of how significant officiating errors are to the outcome of a game is a prick’s trick with multiple willing and hypocritical participants, but this was Fan TV level stuff from a Manchester United club captain. Must do better.

Any previous?
Harry Maguire did express some other interesting opinions on a recent holiday.

Mitigation?
For the mistakes in the game, little is needed. That’s not really our focus here at POTW, and everyone makes them. For the initial post-match interview there is the fact that an obviously disappointing result is very raw and, frankly, it’s a surprise more post-match interviews aren’t of this type or worse. He also may well not have known about the whole offside element to things, which may have calmed his anger and it was prickery for the interviewer not to bring it up in favour of getting “Good Telly” instead.

But even if he hadn’t quite calmed down by the MUTV interview, surely someone had had a word about the offside by that point?

So what happens next?
Manchester United will get some decisions, probably.

Mourinho Corner
There’s a thousand words a week that could be written about the great man now, who is fully into his work. Operation Gaslight appears to be nearing completion, with a sizeable proportion of the Spurs fanbase now openly lamenting that with these terrible players what more could poor Jose possibly do? Never mind that he declared himself thrilled with the squad when he came and that the consensus as recently as October was very much that Spurs had over-achieved in the transfer window.

Or that even now he is at a non-elite club blessed with two world-class attacking talents yet, as Storey puts it, they are “a pair of wonderful attacking artists who are being used to whitewash grey walls”.

The criticism of individual player mistakes grows ever louder as Mourinho performs his trademark trick of making himself the only manager in history who cannot be held responsible for the performances of his players (unless any of them happen to accidentally be good, in which case it is of course largely down to him).

Dishonourable Mentions
Fair bit of assorted prickery around. Some early rumbles about Jurgen Klopp’s job at Liverpool are good fun, and raise the frankly dizzying if still remote prospect of him being out of work before Mourinho is. Everyone going all gooey about Leeds’ amazing effort and spirit in a game where they fell over their own arseholes so repeatedly that they fell 4-0 down in 50 minutes against a team that until that point a) were below them in the table and b) had scored 12 home goals in 11 Premier League games. This excess of praise for Leeds – who, yes, we all enjoy a great deal – was thrown into even sharper focus by their capitulation at the Emirates being sandwiched between West Brom scrapping their nuts off for a point against Manchester United and Fulham absolutely schooling Everton at Goodison.

Obviously, the final word must go to Michael Owen for his personalised double denim and perhaps the single most Partridge thing that has ever occurred outside the established canonical Partridge Cinematic Universe. It would’ve been the main Prick of the Week if there were but a single word we could contribute to add to the majesty of the pictures.

Harry Maguire prick of the week