Home F365 Features Prick of the Week No. 19: Finally it is Harry Redknapp 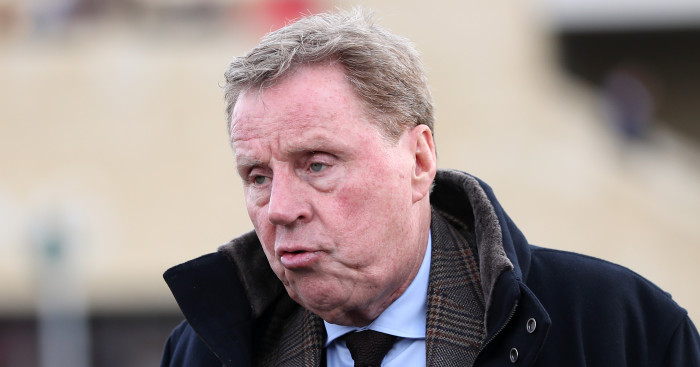 It’s taken 19 weeks to get here, but we all knew this day would come.

So who’s this week’s prick then?
The Frank Lampard sacking inevitably provoked a substantial flurry of bumwash from his adoring fans in the media. It’s the sort of day for which Mediawatch was invented all those years ago, and it’s over here if that’s your bag which it absolutely should be. We’re keeping things closer to home, literally: the impartial and objective analysis of Harry Redknapp on his nephew and most importantly his nephew’s successor.

What’s he done?
Henry James Redknapp has leapt to the defence of his nephew Frank Lampard after his sacking by Chelsea. Now let’s be clear, Redknapp is blindly wrong about Lampard’s suitability for the Chelsea job and his record during it, but it is understandable why that would be the case. Not one of us is objective about family.

And even without that obvious connection, Redknapp would still be the manager who backed Lampard and gave him his chance at West Ham at a time when, strange as it seems now, this was not a universally popular policy with Hammers fans. West Ham may never have seen the very best of Lampard as a player, but it’s fair to say Redknapp was proved categorically right on that one and his enduring soft spot for him makes total sense. Maybe one day he will be about Lampard the manager as well. But today is not that day. We will once again refer you to Mediawatch for the facts and figures on this one to save repetition (and also because there is an excellent line in there about Mason Mount and Kevin Bacon that you really should read).

So defending Lampard? Wrong, but understandable. Barely even prickish if we’re honest. But where Redknapp loses even that defence is in his criticism of the incoming Thomas Tuchel. By any sane measure, Chelsea have brought in a manager whose experience, success and pedigree trumps Lampard a hundred times over. Yet Redknapp, bristling at Gary Neville’s entirely uncontroversial description of Tuchel as a “top manager” – perhaps because only good English lads, ideally members of the extended Lampard-Redknapp family deserve that specifically Redknappian epithet – asked to look at his medals, before airily dismissing them all.

Now all the stuff he won with PSG? Doesn’t count, because money and farmers’ league. The fact Tuchel literally broke records while winning back-to-back Ligue 1 titles and reaching the final of the Champions League is mere tish and fipsy. Spent loads of money and the league is overall of poor quality so of course he won it. Anyone could. Which in no way raises awkward questions about Lampard’s Chelsea sitting ninth in a notably sh*t Premier League despite spending more money than everyone else.

“He’s only won stuff in France” is also a 100% accurate reason why no English club should employ Maurucio Pochettino ever again. It’s also not true about Tuchel, given his wonderful Dortmund side won a Pokal despite their shameful and damning failure to win a league title at the expense of a freakish Bayern Munich who have far more money and generally win everything – which as we know means they don’t count and therefore finishing second to them actually therefore represents a significant achievement and oh no we’ve gone cross-eyed.

The laser focus on titles won also overlooks the work Tuchel did at Augsburg and Mainz, but more importantly overlooks the fact Lampard the manager has won no titles anywhere ever. Even the very least of Tuchel’s credentials to manage Chelsea place “couple of promising but ultimately unsuccessful years at Derby” firmly in the shade.

Mitigation?
The family connection explains a good deal of this, but it does also all just sound uncomfortably close to just bog-standard PFM distrust of foreigners and foreign achievements in daft little leagues that aren’t the biggest and bestest Premier League (or specifically in this instance with mid-table Championship teams) and that is textbook prickery, sadly.

So what happens next?
Tuchel lasts somewhere between 18 and 30 months in the job before being sacked amidst a torrent of criticism from all corners of the media despite a record demonstrably and markedly superior to Lampard’s in every single way.

Mourinho Corner
Still treating English cup competitions with utmost respect, bringing on all his very biggest guns to get his team past a stubbornly impressive Wycombe on Monday night. All very noble, but we will never take Mourinho at face value and therefore are convinced this is all just some long con to complain about fatigue and fixture pile-ups when Spurs’ season unravels over the coming months while playing their 207th game of the season and attempting to compete on four fronts and messing up every single one. Is that him being a prick or us being a prick, or is it a little from column A and a little from column B? It’s probably us. Not putting Dele Alli even on the bench for an FA Cup fourth-round game against a team bottom of the Championship is definitely Jose being a prick, though.

Dishonourable Mentions
Danny Drinkwater would have been bang in contention for his celebratory post when Lampard was sacked and preposterous excuse, were he not already a Prick of the Week alumnus for that time he booted a child. Great areas once again from the former footballer.

Ditto Steve Bruce for getting all precious with the press for daring to be a bit mean about his atrocious Newcastle team.

harry redknapp prick of the week