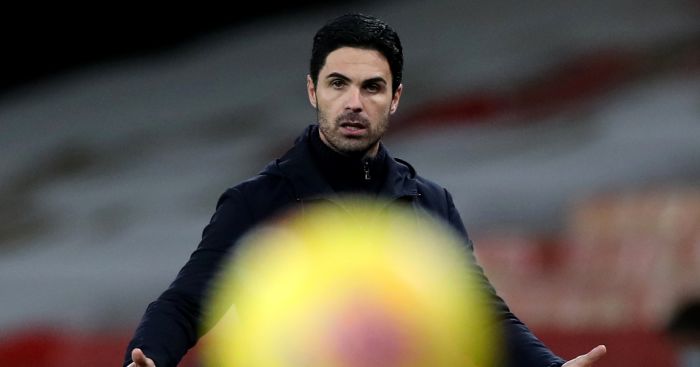 We knew the time would come that we’d deeply, massively regret one-and-done-ing Jose Mourinho in the very first week. Frankly, it’s astonishing we lasted this long. So with the actual prick of the week sadly reduced to his now customary (if bumper) corner, we shift our attention instead ever so slightly across north London where the lovely Mikel Arteta is losing the plot in full glare of media attention. It’s not fun to watch and we feel bad for him because we do like him ever such a lot. And now we’re gonna call him a prick for about 800 words.

So who’s this week’s prick then?
Maths professor and, at time of writing, Arsenal head coach Mikel Arteta. Much as it genuinely pains us to say it.

What’s he done?
Continued to make a bollocks of things at Arsenal, but that’s not the problem. Well it is the problem in a broad sense, and it’s also the reason why he’s resorting to increasingly desperate nonsense. Really, he’s not being a prick. He’s being a bit silly. He’s being a bit of a tit. He’s being a twerpy tit knob. But we saddled ourselves with this unnecessarily divisive and unpleasant title in week one and, again, we’re stuck with that choice now. Like the pricks that we are. Can’t call it Tit of the Week just for Arteta otherwise they’ll all want it changing.

Anyway, what’s he done. While busily and efficiently leading Arsenal into a genuine relegation battle, Arteta has sought solace in mathematics. No problem with that. In the emotional world of elite sport it’s good to be on top of the numbers behind the action, for good and bad. Unfortunately, the numbers Arteta has chosen to cling to are absolute woo. He isn’t using numbers at the moment to try and identify what’s going wrong, but as a crutch to convince himself actually everything is going to be all right.

Now there’s an awful lot going on here. First, this was obviously pre-prepared material and issued pretty much unprompted, with a worrying echo of Rafa’s infamous “facts”. Second, it’s pure numberwang – any mathematical model that came up with those numbers for the Spurs and Everton games must still think Trump has a chance of winning the election – which has an even more worrying echo of the sort of tinfoil-hat nerdery that cost AVB two jobs in England. And third, it’s a gnat’s cock hair away from being a direct Anchorman quote. They’ve done studies, you know. Against Everton, Arsenal win 60 per cent of the time, every time.

But anyone with any football intelligence – and Arteta’s body of work as a player and even on occasion as coach shows he most certainly has this – knows Arsenal’s performances at Spurs and Everton smelled like pure gasoline. They had lots of the ball, but specifically because Everton and Tottenham wanted them to have the ball, knowing they would do nothing with it.

The number that matters from Everton at the weekend is zero, which is the number of shots on target Arsenal managed during an entire second half spent 2-1 down. You can’t just numberwang that away, especially as it is not in any way an isolated case.

We like Arteta and backed him as recently as last week. This quote and its mad percentages is the first time we’ve 100% thought “Nah, he’s f***ed.” And for that, he’s a prick.

Any previous?
There was all that stuff about 30 crosses meaning goals were inevitably just around the corner because “pure maths”. We’ve been blind to the warning signs for some weeks here, haven’t we? Oh, Mikel.

Mitigation?
A non-zero chance he’s either been fed duff info or misunderstood it. But we wouldn’t want to put a percentage figure on it. Suffice to say Arteta is not someone we would currently turn to for clarity on vaccine efficacy statistics.

So what happens next?
A 71% chance he doesn’t survive the season, a 2% chance that all those crosses sort out Arsenal’s goalscoring woes, a 7% chance Arteta’s cup expertise accidentally delivers another trophy in this absolute abomination of a season, a 0.00001% chance that he swallows his pride and gives Mesut Ozil another chance.

Mourinho Corner
Right, strap in, he’s been busy. Let’s go all the way back to the days before the Liverpool game, when Mourinho arrived for a press conference armed with his own maths – specifically, the precise number of days Jurgen Klopp had been Liverpool boss. This was to prove some point or other, but at least his maths was accurate. Bonus prick points for pretending he hadn’t calculated this precisely and triple-checked it (“If I’m wrong, it is only by a couple of days”). Then after the 2-1 defeat there was the “better team lost” spiel, and the pop at Jurgen Klopp’s touchline antics. Jose going right back to his prickish roots with that material. Then there was literally everything about the Leicester performance and Mourinho’s reaction to it. And as if that wasn’t enough, prepared himself for a Wet Wednesday Night in Stoke by complaining vociferously about Stoke’s away changing facilities by making a grand point of not complaining about them. “I have a video of it, a video made from a colleague that works for another team that recently played against them. It should not be a question for me. It should be a question for the authorities, all the authorities – football authority, safety authorities. I am not going to be the bad guy that is going to make comments about Stoke’s away dressing room.” It’s textbook prickery. It’s textbook Jose.

Dishonourable Mentions
Look, we’ve had to call lovely Mikel Arteta a prick this week. Do you really think we’d be doing that if there were loads of other options? Mourinho, I think we’ve covered.

Mikel Arteta prick of the week