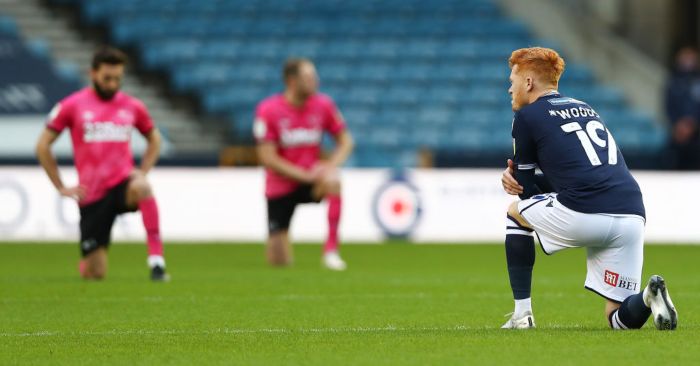 We knew the return of fans was likely to feature this week. Like it or not, a lot of football fans, like a lot of football writers, are pricks. Especially when they gather in numbers. The response to Arsenal beating a rubbish team in front of fans having just lost to a good one without fans also hinted that a further avenue of potential prickery this week was going to be all manner of things that had been happening for weeks suddenly being attributed entirely to the return of fans. Arsenal had been cheerfully twatting Alphabet FC in the Europa and miserably losing to everyone half-decent in the Premier League without fans in the grounds, and we already now have two sizeable pieces of evidence to suggest this will remain the status quo now fans are back. Could have been a fun 800 words in that. But then the return of fans led to a moment of overt unpleasant prickery, and a cavalcade of disingenuous further acts of prickery in response.

So who’s this week’s prick then?
Millwall fans who, having studied Marxism in some depth, decided they don’t much care for it all and thus had no choice but to boo an anti-racism gesture that they have decided is in fact all about Marxism. More to the point this week’s prick is every media commentator and right-wing shill pretending to believe that any of that is true.

What have they done?
Booed an anti-racism gesture and/or defended the booing of an anti-racism gesture. Both are prickish things to do. There are no LEGITIMATE CONCERNS about footballers taking the knee to oppose discrimination – at least, not the ones we’re told we have to listen to (why is it that we’re always supposed to listen to racists and understand their views and never the other way round? We’ve tried listening to racists for the last 10 years, and look where it’s got us). There is certainly an argument that the gesture of footballers taking the knee has become an empty, performative one rather than a genuine means to achieve actual change, something the Millwall Supporters’ Club floated alongside maybe something to do with statues in their attempt to summon up a defence for what happened, but as they themselves acknowledged that doesn’t mean booing is the answer. Because booing an anti-racism gesture in support of the idea that Black Lives Matter is, alas, always going to look kind of racist. Even when, as we know, that’s absolutely the last thing you wanted it to mean.

Any previous?
Yeah, Millwall have a long and proud history of anti-Marxism, which is why people saying this might be racism are so very, very wrong.

The Very Best of Millwall Against Marxism pic.twitter.com/9QWvYi8VzB

In fairness to Millwall, the club has done an awful lot to try and shed its well-known image and is among the best community clubs around. Millwall’s own players had themselves explained their motivation for taking the knee (hint: it wasn’t Marxism) in a pre-emptive attempt to stop what the club feared would happen.

Mitigation?
Not much, really. And for those making the most concerted efforts of all to hear hooves and picture zebras, none at all.

So what happens next?
This will be interesting. Ironically, the actions of Millwall’s fans – and, it should be said, some at other clubs although not in the same numbers and with what became a concerted attempt after what happened at Millwall to drown out any booers with applause – have served only to amplify what was in danger of becoming just another bit of pre-match routine that people didn’t properly think about or act on. Taking the knee may well have drifted away of its own accord before too long; that will not now happen, and nobody is going to take the decision at league or board level to scrap it now that doing so would look like giving in to the anti-Marxists.

Mourinho Corner
Did an absolute number on Arsenal and then gleefully and patronisingly praised the Arsenal manager who had just spent 90 minutes falling into Jose’s conspicuously laid trap, patting Mikel Arteta on his immaculately coiffed head for the way his plucky little strugglers had given table-topping Spurs “a difficult game”.

In short, he’s back and he’s loving it. As we said in 16 Conclusions, the world really must start preparing itself for the slight chance that Spurs might win the league and the absolute racing certainty that Mourinho will be an absolute dog-with-two-cocks prick about it forever if they do. And you thought 2020 was bad.

Dishonourable Mentions
Everyone involved in this goal.

The simplest of finishes for Stuttgart's Silas Wamangituka…

Bremen didn't like it and he was duly booked for unsportsmanlike conduct 😬 pic.twitter.com/6uaP5XRASG

The Stuttgart striker, Silas Wamangituka, is definitely a prick – albeit a magnificent one – for scoring such a gloriously disrespectful goal. Huge fan, it’s the best possible kind of prickery – you’d go so far as to say Lamelaesque and there can be no higher praise than that. But it’s definitely prickery. The Werder Bremen player, Davie Selke, who gets in his face is also obviously a prick, having fallen foul of the classic cognitive dissonance trap that befalls professional sportspeople from time to time: that an act of professional disrespect such as Wamangituka’s justifies what is by any sane measure a far greater one. Most of all, the ref who books Wamangituka is a prick. Always remember when people say referees are just people too and they’re just trying to do a difficult job that they are not. They are jobsworths who hate fun and love attention. Yes, they may have a tough job but at the end of the day it’s a prick’s job and only a prick would want to do it.

blm Millwall price of the week