Home F365 Says Prick of the Week No. 11: Head injuries and football 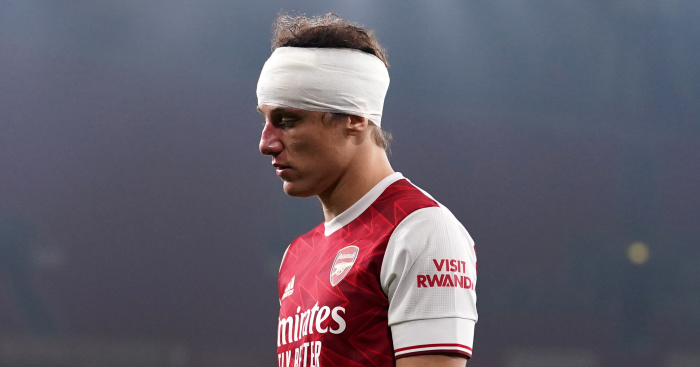 So who’s this week’s prick then?
Head injuries. Head injuries are a prick. More specifically, football’s attitude to head injuries is a prick, despite the mounting evidence of the sport’s dementia timebomb and the recent high-profile deaths of a couple of World Cup winners.

What’s happened?
David Luiz’s head made sickening contact with Raul Jimenez’s head in Arsenal’s game against Wolves. An unfortunate accident. Football will always remain a contact sport and you’re never going to make it completely safe and if we’re all honest with ourselves we wouldn’t want that sport anyway. Everything carries risk.

What football needs to be so, so much better at is mitigating that risk after the event. While Jimenez’s fractured skull and need for oxygen meant he was never going to continue, Luiz was patched up and sent back out there. All part and parcel of the game, isn’t it? Get back out there and risk your career and even life for the rest of these 90 minutes.

Football needs concussion substitutes. It is lagging so far behind other sports now that it’s embarrassing. How many times does football need to be told? Will it need a top player to die on the pitch before a change is made? It’s ridiculous. Troy Deeney’s insistence that players are the best judge of whether or not they can play on is dangerously ridiculous; it takes something quite special to stand out as a dangerous medical opinion in a year when every single one of your aunts has obtained a degree in medicine from the University of Facebook, but Deeney has managed it. Players are the worst judge in these situations. They should have no say in it whatsoever.

Having established that, we next need to talk about the fact we probably have to take the clubs out of it as well. Then we need to talk about how entirely messed up it is that we can’t even trust the clubs to put the best interests of their employees (in a human sense) or assets (in the cold business sense that even the biggest bastard should be able to grasp) first.

It’s only a game, lads. Of course, it’s all tied into the idea of bravery and machismo that frames the language of professional sport. Even in sports that are starting to get their shit together on this, things are still not as good as they should be. Cricket finally moved to allow concussion subs last year, yet that didn’t stop Steve Smith trying to have another go after being clobbered so hard by Jofra Archer that he would ultimately miss the following Test as well. He was eventually replaced in that Lord’s Test by Marnus Labuschagne, but only after deciding to leave a ball on middle stump in a series where he averaged over 100.

Boxing is probably more backwards than football on this issue, with Daniel Dubois receiving plenty of criticism this week after fighting on for five rounds with a broken eye socket. The criticism, obviously yet also when you think about it for even a second insanely, that this was not long enough rather than horrifyingly too long.

So well done, football. On the subject of head injuries, you’re probably just ahead of a sport where concussing your opponent into unconsciousness is literally the point.

Any previous?
Decades of it. This is not really about this weekend’s incident; that just focuses the mind. Football has never taken this seriously enough and is way past the point where pleading ignorance offers even the flimsiest defence.

Mitigation?
There really isn’t much. It’s crazy that this has still not been properly dealt with. The only mitigation is that every incident like this weekend’s nudges things ever so slightly further in the right direction, and the direction of travel is at least clear. But it’s taking too long. Dangerously so.

So what happens next?
It will change. Stricter concussion protocols more akin to those in rugby will come in. Those longer tests will necessitate the provision of temporary concussion subs. This is all inevitable.

Mourinho Corner
Right, that was all a bit serious. Let’s get back to the fun stuff. What’s King Prick himself been up to this week? Ah yes, staged a one-man Jacques Santini bus-parking tribute act and then pinned all the blame for Sunday’s absence of entertainment on Chelsea’s failure to do anything about it. Then described his expensively-assembled team, one that sits top of the league more than a quarter of the way through the season as a “pony” in a title race of horses. He’s played the hits this week, has Jose. Giving the fans what they want.

Dishonourable Mentions
VAR’s ongoing insistence on being the very worst possible version of itself; Jurgen Klopp’s rants at broadcasters which have stopped being any fun at all with remarkable speed; Fulham making us all look daft by refusing to get relegated quite as meekly as we all predicted; Sheffield United making us all look daft by getting relegated as meekly as none of us predicted.