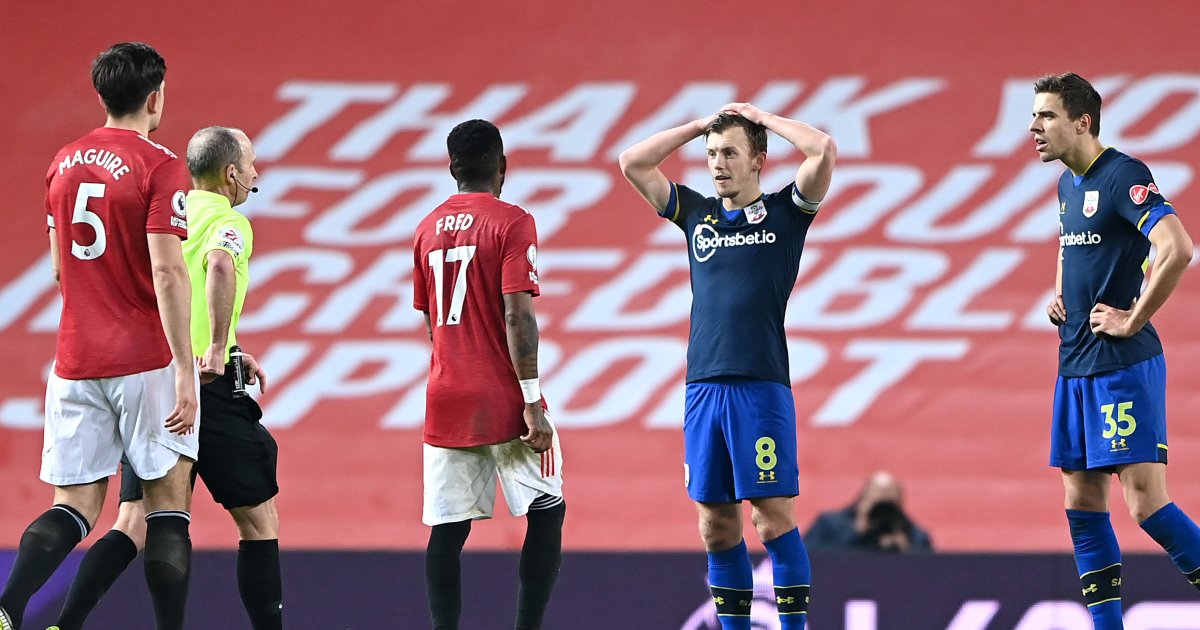 We’ll be honest, it’s been a struggle at times in the last few weeks to identify a solid prick candidate given the inevitably dwindling list of candidates not already hit with the pricking stick. This week there were bloody loads of pricks, though, even allowing for the fact that Jose Mourinho (general joy-sapping death-spiral miserabilism) and Harry Redknapp (getting lost on essential journey to Sky Sports to tell his Benjani anecdote to Jim White again on Deadline Day) are ineligible.

We’ve settled in the end on the weird phenomenon of a quite good football team managing to nevertheless develop a reputation for losing 9-0 which you have to admit is a bit weird and deserving of rude names. Especially if you then try and blame the referee.

What have they done?
They’ve lost 9-0. Again. That’s a prickish thing to do. Nobody in the Premier League has ever lost by a worse score-line than 9-0 and Southampton have now done it in successive seasons. A ridiculous strategy, even if we accept the argument that losing 9-0 last season was actually what spurred them on to finish the season in impressive fashion. That held plenty of weight, to be fair, right up until they proved they’d actually learned absolutely none of the lessons from losing 9-0 to Leicester because they’ve gone and done it again. Unless they’re now going to relearn all the lessons and do really well again, in which case you have to admire that commitment to a strategy I suppose. Still think not losing 9-0 is a better tactic, though, even if that does make me a tiresome contrarian.

But that’s only part of it. Because in the wake of losing 9-0 again (can’t stress enough this is not the first time it’s happened) instead of just doing what you really have to do after losing 9-0 and just keeping your mouth shut and hoping nobody notices you for a bit because you’ve just lost 9-0 again, Southampton have gone full Gareth Keenan. Having just suffered a rather embarrassing 9-0 defeat they’ve looked at all the possibilities and it’s come down to the referee. They don’t want him refereeing any more of their games, please.

Now, was Mike Dean a bit of a prick in wrongly giving a penalty and then watching himself wrongly give a penalty on the monitor and decide not only to still give the penalty but also send Jan Bednarek off for being quite close to Anthony Martial when he hit that weirdly strong patch of gravity? Yes. Yes he was.

But that decision came when Southampton were already 6-0 down having been reduced to 10 men after 79 seconds when teenage debutant Alexandre Jankewitz got himself sent off for a ridiculous thigh-high hack at Scott McTominay (this, incidentally, was quite prickish of Jankewitz, but even we can’t quite bring ourselves to make something a teenager does 79 seconds into their first-team debut at Old Trafford the main focus of our prickish energy).

Mike Dean’s circuitry was not the reason Southampton got thrashed. That dodgy penalty and nonsensical red card at 6-0 did not, ultimately, change the game. Southampton have slightly more of a point about Lee Mason’s role in their altogether less one-sided defeat against Villa, but where does this end? At some point you will run out of referees and have to start looking inward.

Any previous?
Don’t know if we’ve mentioned this before, but this is not the first time Southampton have lost a Premier League game 9-0.

Any mitigation?
Mike Dean is a prick. Southampton did have to pick a pretty ropey side. And finding someone else to blame for why you keep losing football games 9-0 is quite an on-brand thing to happen in 2020s Britain.

So what happens next?
Based on what happened the last time Southampton lost a game 9-0, they will pick up more points from what remains of this season than Manchester United will. We don’t pretend to understand the science behind that, but the evidence is there. Albeit from a sample size that is quite small for a significant scientific study but quite large for the number of times in which the same football team has lost a match 9-0.

Mourinho Corner
Has now definitively entered the final death-spiral of his Tottenham managerial reign impressively early on two counts. One, it’s only 14 months since he took over and this sort of thing normally takes close to twice that to really kick in, and secondly it’s less than two months since his team were literally top of the league before he started throwing assorted individuals under the stubbornly parked bus on the frequent occasions his tactics were undermined by the sort of individual errors that might make a normal brain think ‘maybe try and score a second goal so that potential individual error is less significant’ but makes Jose’s galaxy brain think ‘there should be no errors’. When Spurs contrived to lose to a Brighton team that had failed to win any of it previous 15 Premier League home games, there was no conspicuous individual player error on which to pin things. To an outsider, it looked like a team who didn’t trust or believe or even in fact understand the tactics they were expected to follow and that this failure might therefore have to be pinned on the manager. Again, we were wrong. Turns out this defeat was not one for individual responsibility being taken by one person. It was a collective problem caused by the players all feeling a bit emo. Again, don’t look too closely for a reason why a whole squad of players might be feeling that way. There definitely isn’t one obvious possibility.

Dishonourable Mentions
So many. David Luiz for getting himself sent off and also weirdly Craig Pawson for sending Luiz off. It was properly shit and clumsy defending of the type with which Luiz has become synonymous but also a bit mad as a sending-off offence. Bernd Leno’s sending off was also mad for different reasons. Not because it was undeserved but because no number of replays can reveal what he is actually trying to achieve beyond expressing the ongoing calamity circus that is Arsenal Football Club via the medium of dance.

What else? Oh yeah, Andre Villas-Boas responding to Marseille signing a player on loan by offering his resignation and getting sacked, ending an eye-catchingly odd spell in France for the former Chelsea and Spurs boss. Marseille are also pricks, though, for signing a player the manager didn’t want and seemingly not even telling him and letting him find out about it during a press conference.

The fawning media coverage of Liverpool signing two centre-backs, one from the Championship and one from the worst defence in Germany.