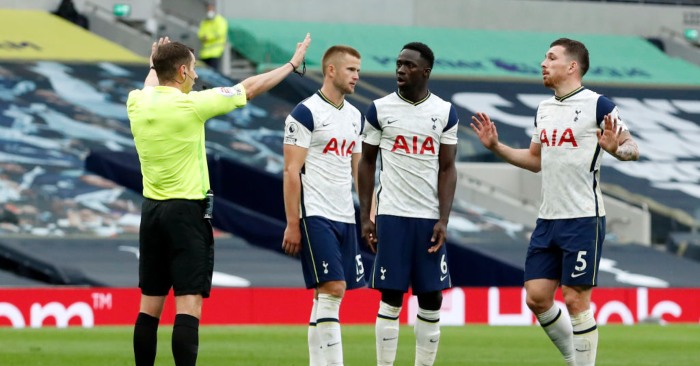 Right, we know it’s only been two weeks since we declared this a VAR-free column because it was too obvious and boring, so I guess in a way we’re the prick (again) but in our defence this is a) not really a VAR issue as such, albeit one forged at least in part and exacerbated massively by the Stockley Park Overseers and b) so transcendentally the issue that has caused the most prickery this week that to discuss anything else would in itself be an act of such nauseatingly self-indulgent, contrarian prickery that we would have no choice but to immediately formally crown ourselves Prick of the Week for doing so, thus creating a paradox that could threaten the entire fabric of space and time. Which is something that might, possibly, be even worse than the really, really, really stupid handball law.

David Roland Elleray MBE, Oxford graduate, Harrow schoolmaster, distinguished Premier League and international referee, and now certain to be remembered only as THE MAN WHO RUINED FOOTBALL with a bit of help from his old pal Mike Riley.

Decided that the only natural position for arms is down by a person’s side, raising serious questions about whether Elleray himself actually has arms or indeed has even ever seen a human or watched how one moves. In his job interview for technical director for the IFAB back in 2016, Elleray appears to have laid out a vision where all defenders are forced to carry out their jobs while performing Riverdance and, instead of being punched in the face, was shaken warmly by the unnaturally positioned hand and given the job on the spot.

He has now made his mad, twisted fever-dream a reality with the assistance of a Premier League officials board led by Riley who have decided to double down on this insane diktat in order to make it even madder. While the generals have their fun, the referees on the ground are apparently far less happy. One report goes so far as to say the refs are “up in arms” about it all, to which Elleray and Riley’s response is presumably to smile wanly and award a penalty-kick against the referees for making their bodies unnaturally bigger.

But beyond the obvious wrong-headed insanity of Elleray’s grand vision and bizarre campaign against the very concept of arms, what really makes him the prick this week specifically is how his rule has forced absolutely everyone in any way involved in football to boringly be a boring hypocrite about a boring issue, even those who just wanted to quietly carry on being boring about Jose Mourinho for a living. In short, Elleray is this week’s prick because he’s made absolutely everyone a prick. He’s made Mike Riley a prick, he’s made Steve Bruce a prick, he’s made everyone on Twitter a prick (although in fairness it would be wrong to give him all the credit/blame for any of these things).

It’s all already even more boring than armpit offsides were, which is very boring indeed, and even pointing out how boring it all is only adds to the boring discourse about the boring issue and makes things worse. Everyone is a prick. And it’s David Elleray’s fault. The prick.

He was a referee and a teacher for a very long time.

Famously gave a dodgy penalty to Manchester United in an FA Cup final and admitted later that he knew immediately it was a dodgy penalty but couldn’t change his mind. Perhaps he never got over this and in a crazed yet almost logical bid to put things right has decided the only thing he could do was to make sure in future that ALL matches were blighted by a dodgy penalty.

One of two things. The interpretation of the rule remains as it is now, resulting in more and more players whacking the ball at defenders and screaming for penalties, lots of which will be given, prompting more and more people to complain about the game being gone now and insisting that officials be allowed to use their common sense when making decisions because common sense is all we really want. Alternatively, the current draconian interpretation will be relaxed slightly, resulting in penalty shouts fundamentally identical to a Ward or a Dier not being given, prompting more and more people to complain about it and insist that officials be consistent when making decisions because consistency is all we really want. Either way, a nightmarish hellscape.

Another big week for the patron saint of this column. Wild banter continues to pursue Spurs on their early-season Eastern European tour, with Mourinho this week finding himself with quite literally no alternative but to pose in classic compo-face fashion standing in a goal to prove that it was too small. We like to think that deep down a Machiavellian rascal such as Mourinho actually had nothing but the utmost admiration for the scam Macedonian side Shkendija attempted to pull there, and we would strongly advise all future visitors to White Hart Lane 2.0 this season to bring their tape measure. Fury at the handball nonsense understandable yet still flecked with classic Mourinho prickery about Spurs not getting ‘enough respect’ like these daft decisions are only happening to him and not popping up literally anywhere one finds a defender who has arms.

Every single person who tweeted “Can we have our game back, please?!??” and specifically St Gary of Lineker, having himself previously suggested making any contact with the hand a penalty – only his acknowledgement and acceptance of the inherent wrong-headed prickery of that scheme saved him from being a wildly controversial recipient of this week’s main award; Roy Keane for being his usual self and Jurgen Klopp for rising to it; Wolverhampton Wanderers.

handball prick of the week