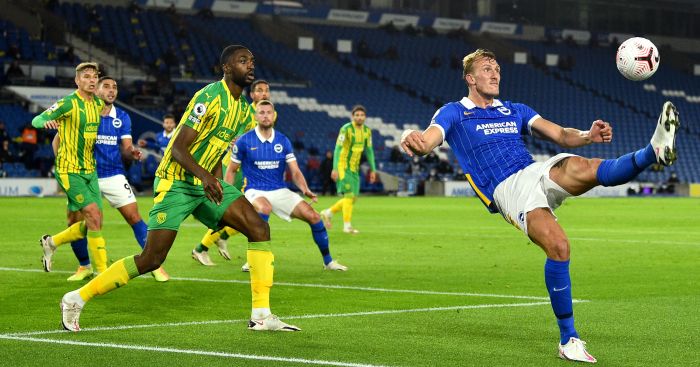 Let’s face it the whole PPV wheeze has been a shitshow. A monument to the greed and arrogance of Premier League clubs who have spent the whole of 2020 alternating between eye-watering spends and pleading poverty as and when convenient. The 15 quid pricepoint is utterly mental, and never more so than for the irrevocably bleak Monday 5.30pm slot. And not just because it appears to have been earmarked as the West Brom Hour.

While it’s debatable whether there is ever truly a correct time to watch West Brom attempt Premier League association football, it’s clear that 5.30pm on a Monday is definitely not it, and certainly not for £14.95.

Kick-off times are funny things, really. A 5.30pm kick off on a Monday is, for example, an absolutely marvellous time for a game of football if it’s July and it’s on BBC One and it’s Algeria v South Korea in a game that could have huge repercussions for both sides’ hopes of making the last 16. But for West Brom against Brighton? Absolutely not.

Even before the PPV came in, this was always the weakest slot in the new timetable, but at least then it was a minor issue. Yes, it would be a terrible time for a game to start if fans had to try and make it work, but that’s not going to be a problem for a good while yet and such an inconvenient kick-off time was a small price to pay for every game being on TV.

You might not watch the whole thing, but you might catch the second half as a lovely bit of bonus football before the proper Monday Night Football game. Might not be the best game, but it’s still football, isn’t it? You’ll still watch it. Banters about £15 for 45 minutes of West Brom being better value than £15 aside, even that is now no longer an option.

To the enormous credit of the teams involved, they’ve treated the slot with the contempt it deserves, with West Brom and Burnley playing out a goalless draw last week and the Baggies drawing 1-1 with Brighton this time around. It’s West Brom and Fulham next Monday, so that 1-1 might even represent a memorable high point.

With viewing figures hard to come by, we’re left with no option but to conclude that despite everything these matches are in fact being viewed by fewer people at home than in the shuttered grounds.

Who remembers PremPlus? Look at his face, he doesn’t remember Premier Plus, he’s too young. Used to watch Premier League games on Premier Plus, didn’t we? Marcus Buckland. George Graham. Eight quid a go, booked it, watched it, f***ed off. That ended in 2007, though, and it didn’t have matches on Monday evenings and some of its games didn’t even feature West Brom.

The tin-eared PPV decision on the back of Project Big Picture has opened a few more eyes to the undiluted greed behind top-level football. It’s also indirectly raised a large amount of money for food banks all around the country thanks to the sort of grassroots goodness that football fans are so good at when gripped by a collective mood, with plenty of supporters choosing to donate £15 to the neediest in protest against being tipped upside down and shaken by the ankles by their clubs yet again.

The international break means Fulham 0-0 West Brom is the last confirmed Monday PPV slot and it remains to be seen what happens next. Sky and BT Sport are reportedly not entirely happy with the arrangement, because they’re copping lots of the flak while the clubs get the coin. Sky and BT also find themselves showcasing precisely the kind of on-demand service that, properly priced, could appeal to the more flexibly minded streaming services. Neither broadcaster is making much of a fuss about advertising the PPV games either. It feels like the current situation is unlikely to stand for long.

Fans won’t be back in grounds for a good while yet, though, so the current timeslots will still contain matches for some time, you’d think. The Monday 5.30pm game is here for a while, but whether it continues to come with such an overtly preposterous price tag is less clear.

Disappointingly sane in the wake of the West Ham Incident, with “football happened” a classically neat Jose soundbite and his refutation of any Spursiness palpably untrue yet also tactically necessary. But this Tottenham iteration of Mourinho often delivers his best prickery when in a good mood and making a big show of that. It basically fuelled an entire six-part documentary. Using his post-match chat with Sky after the 1-0 win at Burnley to praise Michael Oliver for having the control not to send Ashley Barnes off in the first half which would definitely 100% have still been his position had the dominoes fallen differently in that second half and Burnley emerged victorious instead was textbook.

People starting to care whether or not Marcus Rashford can or should win SPOTY like an award once won by Zara Phillips for riding a horse while royal matters even one tiny bit either way in the grand scheme of his achievements; the unwelcome return of clean sheets; Everton’s squad depth.

PPV prick of the week