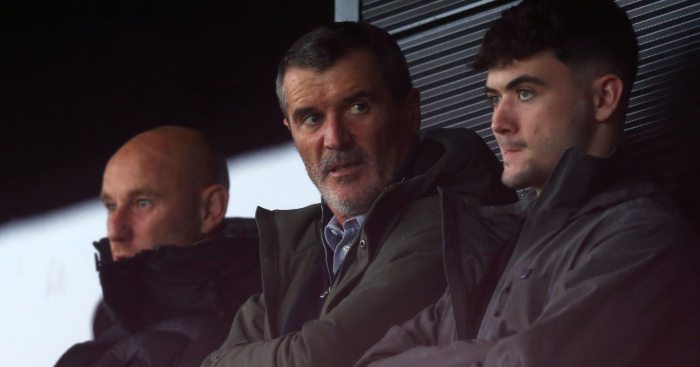 It is of course Roy Maurice Keane, for whom all football since about 2006 is an affront that makes him very angry indeed.

Got very angry indeed. It’s telling that of all the great many things that make Roy Keane very angry indeed nothing gets him going quite like Manchester United losing to Arsenal. It’s still 2003 in Roy World and this is still the biggest fixture in the land.

Manchester United’s damp flannel of a performance against Arsenal on Sunday was always likely to send Keane over the edge and so it proved, the great man banging on endlessly about a lack of leaders and players not willing to “roll their sleeves up” for Manchester United. Singled out Marcus Rashford which was ludicrous in and of itself, yet also extraordinarily tin-eared. You did almost find yourself admiring that part, though, specifically because of Keane’s refusal to read the room like some namby-pamby soy boy would have.

Failed to address how the absence of blood-and-thunder lead-by-example warrior-ballers that had so hindered United had not stopped Arsenal running absolute rings around them for 90 minutes, perhaps – and this is only a guess – because it would have revealed absolutely everything else he had said to be nought but steaming bumwater.

Did have one criticism of Arsenal, though, and it was if anything even more spectacular than his United scathing. While other lesser minds may have thought Pierre-Emerick Aubameyang would be firmly in his manager’s good books after scoring the winning goal that gave the Gunners their first Premier League win at Old Trafford in almost 15 years and ended a distressingly long winless away record against all fellow Big Sixers, Keane knew better. Aubameyang, 31, had shown outrageous disrespect to 38-year-old Mikel Arteta by referring to him as “Mikel”, which is literally his name, rather than “gaffer” or “boss” or “Bertie Big Bollocks” like a proper footballer would have done.

It’s times like these you scratch your head and wonder just why Keane’s own managerial career went so badly.

Almost none, unless you count everything he has ever said on the television and any number of things that happened during his playing career. If nothing else he is at least thoroughly consistent on the importance of players showing managers respect, with no high-profile example to disprove this notion in existence.

United will win a couple of games, then they’ll lose one in a meek and insipid manner and the great dance shall begin once more.

Jose on good form this week. We’ve not mentioned his Instagram account until now, but it’s low-key one of the best things about this season. The pretty ropey Europa (Europey?) League defeat to Royal Antwerp prompted this classic of the genre.

There are obvious things here. The glasses. The monogrammed luggage. Talking about “everyone” on what is quite clearly an empty bus, but mainly it’s the fact that adult human Jose Mourinho has coerced another adult human into taking this photograph. We’ve spent most of the last four days thinking about little else other than the conversation that led to this.

Mourinho was back on more mischievous form after the 2-1 victory over Brighton. Gareth Bale’s winning goal prompting Jose to tell reporters he was going to “Go on Safari and check the reaction on Madrid websites”.

This is Jose at his best. And on a semi-serious note bodes well for Spurs – we haven’t seen much of this Jose for the last five years, but this is a reminder that he still knows how to deliver a line when the mood takes, and the specificity of naming the search engine is a fantastic touch that really elevates the whole gag. He’s in a happy place, despite that studiedly glum Europa bus trip. Basically what we’re saying is that Spurs are going to win the league, and this line was the moment that made it clear.

Tony Cascarino and the entire discourse around diving.

prick of the week Roy Keane